Transseptal access to the left heart is increasingly performed for electrophysiological procedures and for structural heart disease interventions such as balloon mitral valvuloplasty (BMV), left atrial appendage closure (LAAC) and transcatheter mitral valve repair (TMVr). Most of the iatrogenic atrial septal defects (iASDs) close spontaneously, and for those that persist, the majority do not result in clinical manifestations.1 Infrequently, a clinically significant interatrial shunt persists; mostly left to right, resulting in right heart failure.2 We report an unusual case of arterial desaturation due to right-to-left interatrial shunting following transseptal access for electrophysiological ablation, which was successfully treated with device closure.

Case report. A 69-year-old woman presented with increasing dyspnoea (New York Heart Association [NYHA] class III) of 4 months’ duration. She had a history of myocarditis and cardiogenic shock with severely impaired left ventricular ejection fraction (LVEF) of 20–25% 3 years prior, which required extracorporeal membrane oxygenator and intra-aortic balloon pump support, and insertion of an implantable cardioverter-defibrillator (ICD). She recovered with a mildly impaired LVEF of 40–45%.

However, 2 months after the ablation procedure, she developed increasing dyspnoea with minimal exertion (NYHA class III). Optimising her medications did not alleviate her symptoms and her oxygen saturation was 88–89% despite use of supplemental oxygen. Repeat echocardiography showed unchanged LVEF, MR and TR, and mean PAP was 30mmHg; however, there was a right-to-left shunt across the iASD. It was noted that the TR jet was eccentric and was directed towards the atrial septum. Subsequent transoesophageal echocardiogram (TEE) confirmed a right-to-left shunt across the iASD measuring 10x13mm in diameter. She declined to undergo a right and left heart study for further assessment of the iASD.

Percutaneous ASD closure was performed. Using TEE and fluoroscopy guidance, a 16mm Amplatzer septal occluder (ASO, Abbott Vascular, Redwood City, US) was successfully implanted. No oxygen or pressure measurements were made during the procedure as these findings would not have altered the treatment. There was no residual shunt and the oxygen saturation increased immediately from 89% to 96%. At 3-month follow-up, she reported marked symptom improvement (NYHA class II) and oxygen saturation was 98% on ambient air. Echocardiography showed unchanged LVEF and valve findings, and a stable ASO device with no residual interatrial shunt. 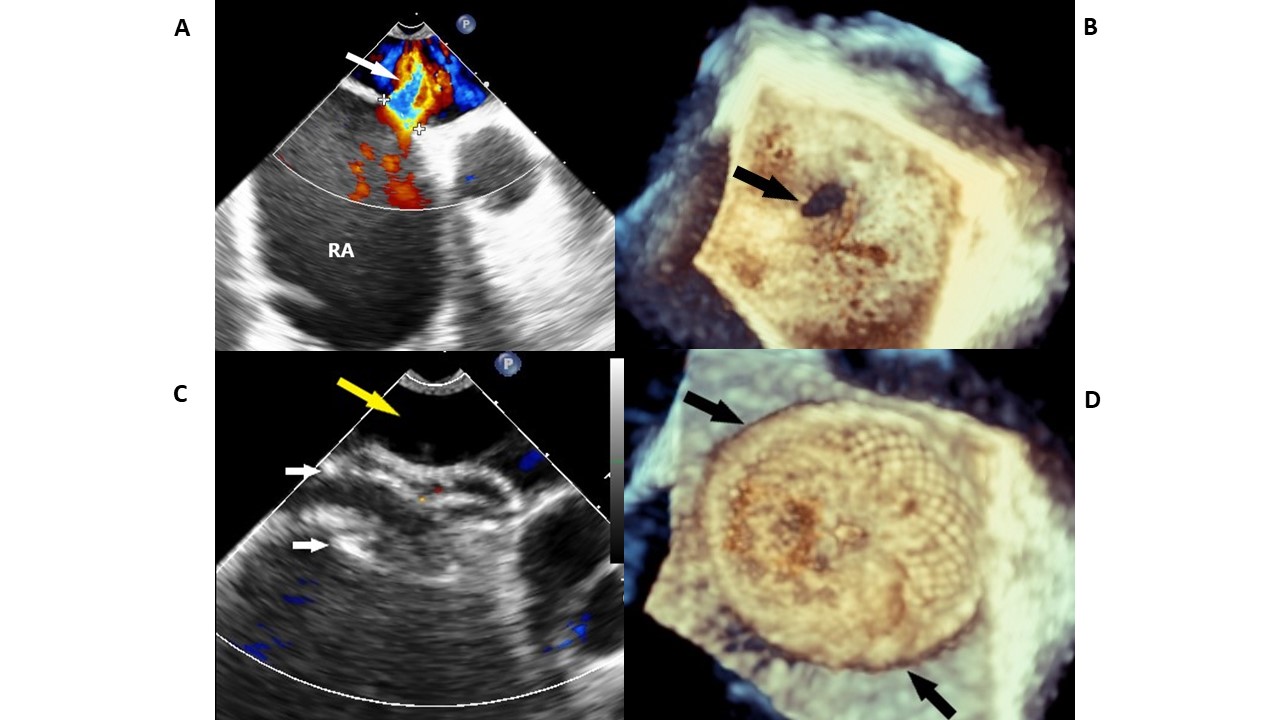 Discussion. Access to the left heart—from the femoral vein—via a transseptal puncture is necessary for percutaneous left heart structural interventions and for electrophysiology study and ablation of atrial fibrillation and LV VT. In most patients, the iASDs created close spontaneously or remain asymptomatic.1

Significant residual shunts usually occur after use of large bore devices such as with percutaneous mitral valve repair. It has been shown that up to 50% of patients have a residual iASD 6 months after transseptal access (22-French size sheath) for TMVr with the MitraClip system (Abbott Vascular, Redwood City, US).3 Persistent iASDs after transseptal access with smaller catheters such as electrophysiological procedures, BMV and LAAC are less common.1 Specifically, AF ablation requires 2 catheters in the left atrium (LA), achieved using either a single transseptal puncture with double cannulation, or a double transseptal puncture. Both are accepted techniques, but the single puncture technique demonstrated a slightly higher incidence of persistent iASDs, although the overall rate was low.4 Indeed, residual iASDs were detected in only 3.7–13.4% of patients 3–12 months after transseptal access for atrial fibrillation ablation,5-7 lower after RF ablation (2.4–8.5%) compared to cryoballoon ablation (16.7–22.2%).6,7 Furthermore, all iASDs after AF ablation were left-to-right shunts,5-7 and overall, only 2% of patients required device closure.7,8

Most iASDs that persist are fortunately haemodynamically insignificant; however, in some patients, left-to-right shunts result in progressive right ventricular overload and failure. Less commonly, right-to-left shunts result in arterial desaturation.1,2,9 Risk factors that predispose to persistent iASD include larger transseptal sheath size, procedure duration, amount of catheter manipulation while across the interatrial septum, lower LVEF, larger right atrial size, more severe MR and TR, as well as higher pulmonary artery, left and right atrial pressures.1,3,9 It has also been demonstrated that all defects <4mm closed and all defects >8mm persisted at 30 days post-procedure.10

Since most iASDs are benign or close spontaneously, and as there are risks associated with percutaneous closure (device erosion, device embolisation, device clot formation and difficulty in performing future transseptal procedures),2 routine closure is currently not recommended.1 However, large iASDs or shunts that result in heart failure or arterial desaturation will need to be closed. Percutaneous iASD closure is the treatment of choice given its minimally invasive nature and low periprocedural risks. Most case series demonstrate good clinical outcomes after device closure for symptomatic iASDs.2

It was likely that the iASD persisted in our patient due to the presence of most of the risk factors mentioned, including double transseptal cannulation, repeated catheter manipulations, prolonged procedure duration, lower LVEF, severely dilated RA, and significant MR and TR. As right-to-left shunts have not been reported after transseptal access for catheter ablation, we postulate that the right-to-left shunt in our patient was facilitated by the severe TR jet “directing” blood across the iASD into the LA.

In conclusion, this report demonstrates that a significant intertrial shunt can develop after transseptal access in procedures using “standard” EP catheters. This may be encountered more frequently in future as the volume of transseptal access for electrophysiological procedures and structural heart interventions increase. An interatrial shunt must be considered in any patient who develops dyspnoea or arterial desaturation after transseptal procedures. Percutaneous device closure is required for symptom relief and to prevent clinical deterioration.