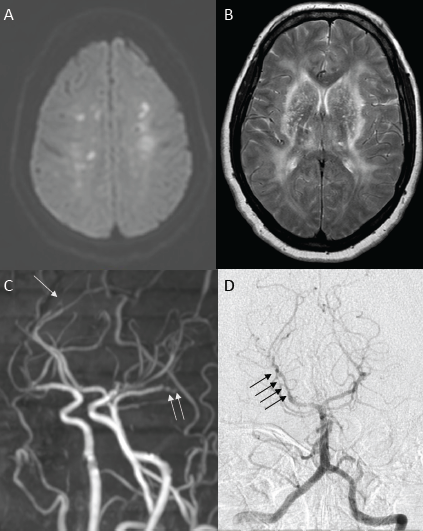 What is the most likely differential diagnosis?

The diagnosis of primary angiitis of the central nervous system (PACNS) was made and the woman received intravenous methylprednisolone followed by tapering doses of oral prednisolone and methotrexate. At a review after 6 months, the patient was neurologically stable with residual memory impairment and frontal lobe dysfunction.

PACNS is a rare form of vasculitis that is limited to the brain and spinal cord. The underlying cause and pathogenesis are unknown, but possible triggers include viral infections such as varicella-zoster virus infection. The association between cerebral amyloid angiopathy and PACNS also suggests that amyloid deposition could trigger vascular inflammation.

PACNS has neither pathognomonic features nor a typical clinical course.1 Common presenting symptoms are stroke-like events, headache and altered cognition.2 Typical MRI findings of PACNS include infarcts in small to medium-sized vessel territories, haemorrhage and microhaemorrhage, and multifocal stenosis and beading on magnetic resonance angiography (MRA). However, there is heterogeneity in the clinical presentation, neuroimaging, blood and CSF workup. Of note, 7% of PACNS cases have normal MRI.3 Additionally, CSF analysis can be normal in up to 26% of cases.3 Hence, a low threshold of suspicion is required for diagnosis and the value of investigations lies in excluding a secondary cause of vasculitis and other PACNS mimics including infection and malignancy. Table 1 demonstrates the experience of our institution and reflects the heterogeneity in clinical manifestations of PACNS.

Table 1. Key findings of 5 patients with primary angiitis of the central nervous system in our institution 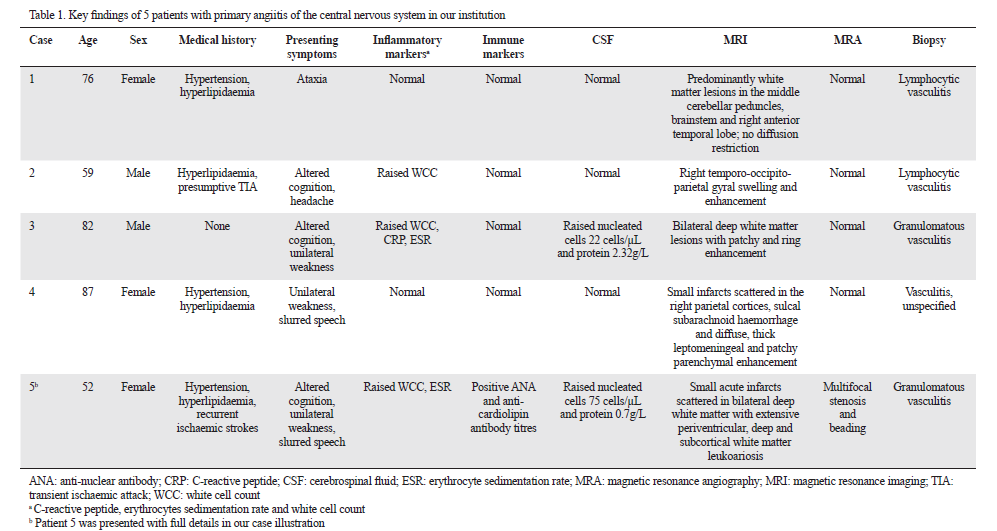 The gold standard for diagnosis of PACNS is the demonstration of transmural vessel wall inflammation on cerebral and/or leptomeningeal biopsy.1 Although there is a relatively high rate of false negative due to the inherent patchy nature of the disease,3 biopsy is useful to rule out other conditions such as central nervous system intravascular lymphoma and reversible cerebral vasoconstriction syndrome.4 One study showed that brain biopsy confirmed vasculitis and alternative diagnoses in 75% of patients.5 It is noteworthy that brain biopsy has been shown to be relatively safe with mortality and morbidity rates of less than 1% and 3.5%, respectively.6 Early brain biopsy should be considered in patients due to the importance of histological diagnosis.

Digital subtraction angiography, which is inherently less invasive than a craniotomy, has been considered a potential replacement for brain biopsy. However, the utility of DSA remains controversial due to the lack of concordance between DSA and histology.1,3,5,7 While superior to MRA, DSA has a limited resolution in detecting abnormalities at the level of small arteries and arterioles. In addition, similar to computed tomography and MRA, DSA provides luminal but not vessel wall information, hence vessel wall disease that has not resulted in luminal abnormality may not be detected. In studies with pathological correlation, both sensitivity and specificity of DSA was shown to be only 25–35%.3,5 High-resolution MRI of the vessel wall, or “black blood imaging” is an emerging and promising imaging choice that may help to differentiate PACNS from other vasculopathies such as RCVS,2 and it can direct a brain biopsy target to allow for more diagnostic histology.8 However, black blood imaging remains non-routine as resolution at the level of small arteries/arterioles remains a challenge,9 with additional studies needed to demonstrate direct histological correlation.

There is no standardised treatment regime for PACNS. It is generally accepted that initial treatment consists of high-dose corticosteroids, followed by steroid-sparing agents such as azathioprine or mycophenolate mofetil.10 In more severe cases, cyclophosphamide is added. Treatment is further escalated to tumour necrosis factor-α (TNF-α) inhibitors or rituximab for patients who do not respond.2 Nonetheless, treatment-related complications, including life-threatening infections due to chronic immunosuppression, may arise. At our institution, of 5 patients histologically diagnosed with PACNS who achieved clinical stability with immunosuppressive therapy (Table 1), 3 patients succumbed to life-threatening pneumonia within 1 year of treatment, highlighting the risks associated with immunosuppressive agents. Consistent with recent efforts to advocate pathological diagnosis,7 we recommend early biopsy for histological confirmation prior to aggressive immunosuppressive therapy.