A 43-year-old woman with no past medical history presented with 8 months of progressive memory loss and irritability, which led to her resigning from her office job. She frequently misplaced belongings, asked for deceased relatives, and could no longer bathe herself. When listening to conversations around her, she found them “strange and difficult to understand, as though in a dream”.

She had developed secondary amenorrhoea in the past 4 months and had lost 12kg over a year despite eating well. She felt fatigued, and could take up to 3 hours to fall asleep nightly, with a reduced total sleep duration. While asleep, her mother observed that she would slowly raise her arms intermittently, while her legs made small jerking movements. No involuntary movements were seen when she was awake.

Her own father had died at 53 after a year of rapidly progressive dementia, weight loss, paucity of speech and jerky limb movements. A paternal uncle who was in his 70s had experienced behavioural changes and unsteady gait over the last 6 years.

On examination, she was alert but disoriented. She had a postural tremor, symmetrically brisk reflexes and down-going plantars. She was unsteady on tandem gait and had difficulty turning. Her neck was supple. Mini-mental state examination score was 18/28. She showed deficits in executive function, verbal fluency, attention and processing speed.

Given inconclusive investigations and a positive family history, genetic testing was performed. This identified a heterozygous pathogenic variant in the PRNP gene, c.532G>A (D178N), which co-segregates with methionine at codon 129. This mutation causes fatal familial insomnia (FFI), and is inherited in an autosomal dominant fashion.1

Over a few months, the patient developed progressive urinary retention, tachycardia and high fevers without clear sources of infection. She was treated with paracetamol, non-steroidal anti-inflammatory drugs, bisoprolol and intermittent catheterisation. As she became increasingly withdrawn and bedbound, home care services were engaged. With their support, the patient was able to avoid readmission, in keeping with her wishes. She died 11 months after symptom onset, and only 3 months after diagnosis.

FFI is a rare inherited prion disease characterised by focal neuronal loss first from the thalamus, and later from the medulla and cortex. A single other local case of FFI has been reported,2 although details of the PRNP mutation identified were not available. Definitive diagnostic criteria for FFI have been proposed.3 FFI is associated with sleep disturbances—such as insomnia, sleep-related involuntary movements, stridor and dyspnoea—psychiatric symptoms, weight loss and sympathetic overactivity.4 Features of endocrine dysfunction such as hypercortisolism, female amenorrhoea or male impotence can arise from hypothalamic involvement.5 In Asians diagnosed with FFI, neuropsychiatric symptoms, dysautonomia and sleep apnoea are more common than in non-Asians.6 This patient’s abrupt disease course is consistent with that described in an FFI cohort, where death occurred on average 13 months from disease onset.6 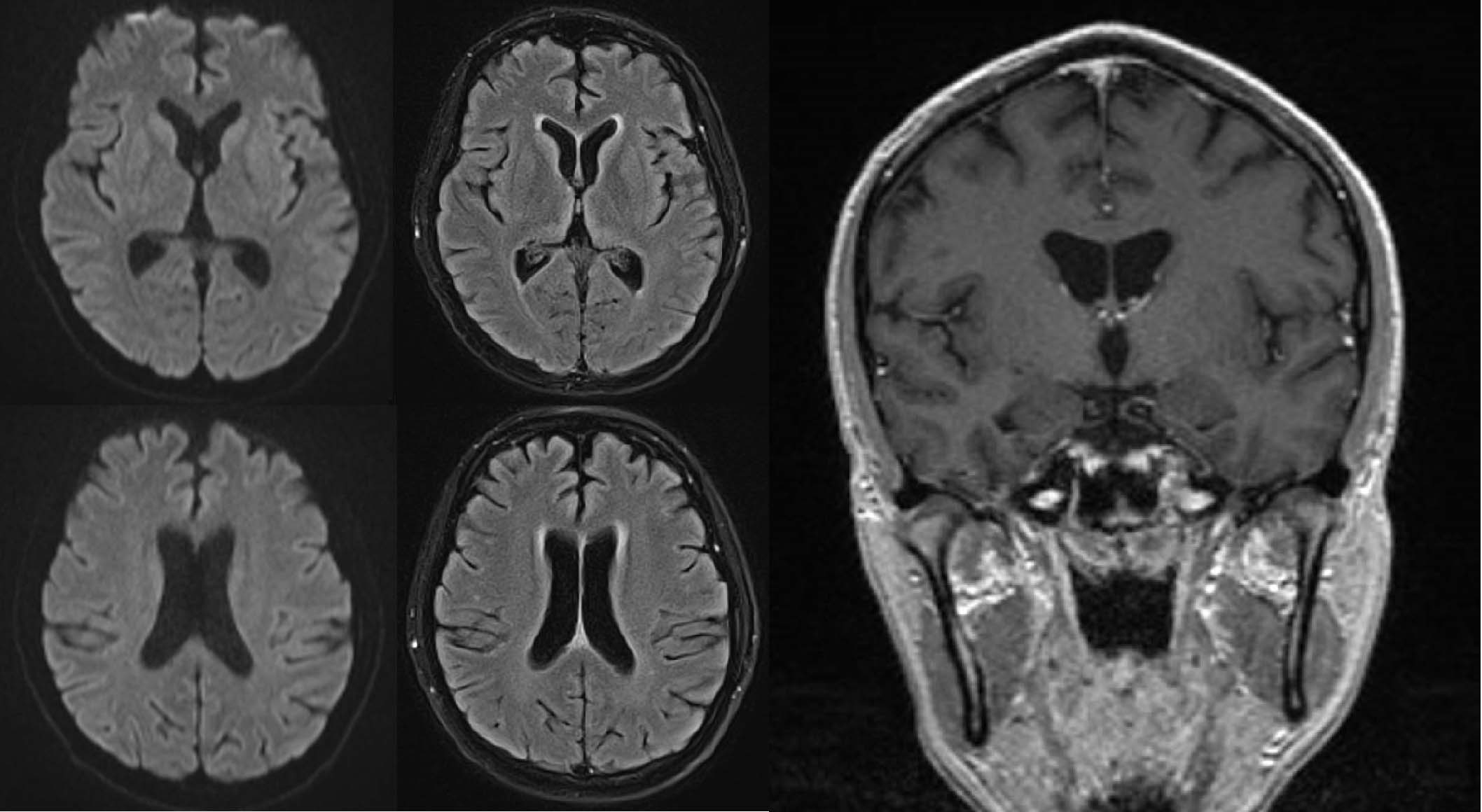 Certain differential diagnoses of rapidly progressive, early-onset dementia should be considered, including sporadic Creutzfeldt-Jakob disease (CJD). As with FFI, sporadic CJD can also be associated with the PRNP variant D178N, but in the latter, valine instead of methionine is found at codon 129. Sporadic CJD is associated with more florid ataxia, visual and extrapyramidal deficits7 than what this patient demonstrated. IgLON5 disease was also considered, but the onset of IgLON5 is usually more insidious, and its disease trajectory includes oculomotor and bulbar dysfunction.8 Other differentials of agrypnia excitata were also excluded systematically; this patient did not have neuromyotonia, anti-CASPR2 antibodies and malignancy seen in Morvan syndrome, or any identifiable causes of delirium tremens.

Some features in our patient were unusual for FFI. Cognitive impairment and motor features often occur later than dysautonomia in the course of FFI,9 although the converse was true for this patient. It is conceivable that different genetic subtypes of FFI lead to different disease phenotypes.10 Interestingly also, the patient’s father had developed myoclonus, while her uncle deteriorated at an older age and over a longer disease course. These features resembled sporadic CJD more so than FFI. Nevertheless, it is possible that a single PRNP variant can give rise to a spectrum of phenotypes.11

Conventional MRI, EEG and CSF 14-3-3 may not be specific for FFI.12 In fact, these are neither necessary nor sufficient in proposed criteria for diagnosing FFI.3 The prion burden in FFI is lower than in sporadic CJD, and its distribution within brain tissue more restricted, thus these tests may only show abnormalities in very advanced disease. Certain alternative investigations could have been considered in this patient. Even in earlier stages of FFI, polysomnography may help to detect reduced total sleep time, absent sleep spindles and lack of rapid eye movement atonia,13 while fluorodeoxyglucose-positron emission tomography imaging may show thalamic and cingulate hypometabolism.2

There remains no definitive treatment for FFI. A formal genetic diagnosis helped the team to pre-empt the patient’s disease trajectory and explore her preferences for end-of-life care. This provided some closure for her family.