A 65-year-old Chinese man was admitted for evaluation of chronic anaemia. He had a history of hypertension and chronic kidney disease, and his regular medications were nifedipine and losartan. He was a retired cleaner who lived with friends and had no contact with his family.

He was referred to the Dermatology clinic for thick, brown and tree bark-like scaling on his legs extending from below the knees down to the dorsal feet. On rubbing with alcohol swabs, the scales came off, but only very slightly. According to the patient, his legs had looked like this for the past 1 year (Figs. 1A and 2). He reported occasional mild itch, but denied scratching or applying anything in particular to his legs. He had no personal or family history of atopy. Apart from the leg lesions, which were the most dramatic, he also had some mild brown scaling over the axillae and abdomen, and had elongated untrimmed toenails. The rest of his skin and mucosae were unremarkable and he had no palpable lymph nodes. Skin scrapings did not reveal any scabies mites. He admitted to avoiding washing his legs while showering.

He was advised to shower with chlorhexidine soap and apply urea cream thrice daily. He was instructed to gently rub off loose scales in the shower. He was also referred to a podiatry specialist to assist with toenail trimming. Two days later, a dramatic improvement was seen in the skin condition of his legs (Fig. 1B). The axillary and abdominal lesions had completely cleared. At subsequent follow-up 1 month later, the skin on his legs continued to improve (Fig. 1C).

Fig. 1. Serial pictures of the shin. (A) At presentation, (B) 2 days post-urea cream and showering with chlorhexidine soap, (C) at 1-month follow-up. Note the toenails as well. 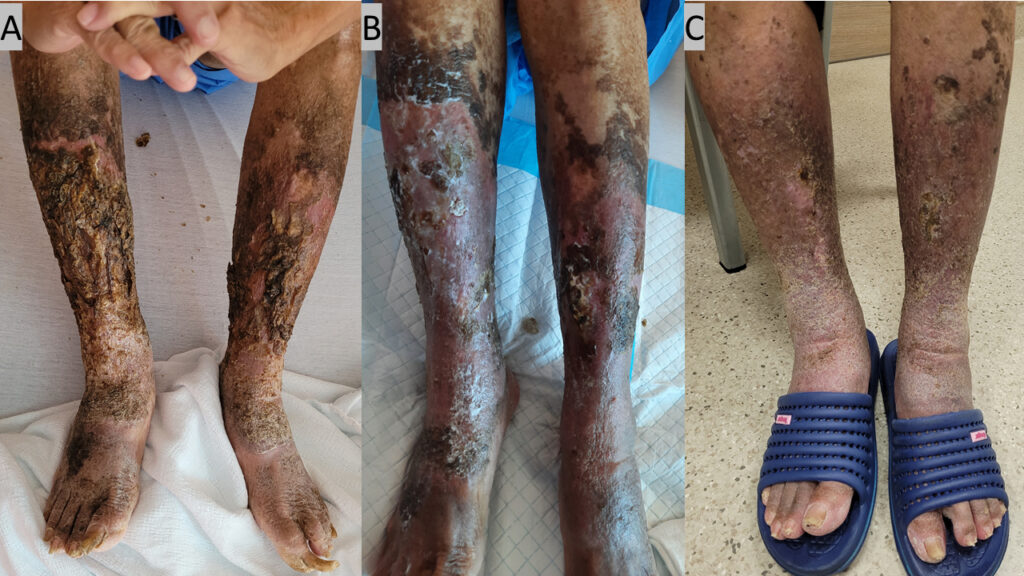 Epidermodysplasia verruciformis (EV) is a rare inherited disorder, associated with increased susceptibility to human papillomavirus infections. An acquired form of EV occasionally develops in the immunocompromised. The condition presents with multiple giant verrucous cutaneous horns, plane warts and pityriasis versicolor-like lesions. These are difficult to eradicate completely, and skin cancers can develop from these lesions.1 Although our patient had warty tree-bark-like plaques on the shins, these lesions improved quickly with keratolytic moisturisers and cleansing.

Crusted scabies presents with thick, yellowish and crusted scales and burrows predominantly at typical sites such as hands, feet and genitals. Scrapings for scabies are generally teeming with mites, which was not seen in our patient.

Sharply demarcated, thick and brown plaques over sun-exposed sites can be seen in pellagra. Points against pellagra in our patient included absence of involvement at other sun-exposed sites, absence of glossitis or stomatitis or other mucosal symptoms, absence of any other history suggestive of malnutrition or malabsorption, and rapid improvement with mere soap, water and urea cream.

Terra firma-forme dermatosis (TFFD) can morphologically resemble our patient’s lesions. However, the lesions are not removable upon washing with soap and water. However, they can be completely rubbed off with isopropyl alcohol, which may be a diagnostic indicator.2 This was not the case in our patient.

Dermatitis neglecta (DN) is a condition that results from inadequate frictional cleansing leading to accumulation of corneocytes, sebum and sweat ultimately resulting in hyperpigmented patches or verrucous plaques.3 DN was first described by Poskitt et al. in 1995.4 It has no gender predilection, affects all ages, and is frequently underdiagnosed. Clinically, there are asymptomatic hyperkeratotic plaques with cornflake-like scales. Inadequate cleansing and improper hygiene in an area of immobility, pain, hyperaesthesia, prior trauma, and surgery leading to inadequate exfoliation of skin are the commonly reported inciting factors.3 There are also reports of DN in patients with psychiatric conditions, including depression and schizophrenia, or related to religious beliefs.5

DN has been reported at a variety of body sites3,6,7 and at all ages.8 It is suggested that DN should be kept in mind in the differential diagnosis of all hyperpigmented localised lesions, especially in those with a background of disability. There are many similarities between DN and TFFD. In TFFD, the distinguishing features are presence of adequate hygiene, unresponsiveness of the hyperpigmented patch to soap water swabbing, but successful removal of lesions by alcohol swabbing.2,3 On dermoscopy, larger polygonal scales are more suggestive of TFFD, while DN is characterised by more irregularly distributed cornflake like scales. On histopathology, TFFD shows more prominent papillomatosis, acanthosis and compact orthohyperkeratosis, while DN shows basketweave hyperkeratosis and diminished rete pegs.6 Other differential diagnoses depending on the site of lesions would include confluent and reticulated papillomatosis of Gougerot and Carteaud, pityriasis versicolor, verrucous epidermal naevi, acanthosis nigricans, frictional hyperkeratosis, atopic dirty neck, pemphigus foliaceus, Darier’s disease and several forms of ichthyosis.3,9

Our patient had no psychiatric issues, but poor social support could have contributed to his condition. His serum zinc level was low, which was replaced. He was also advised to undergo a varicose vein scan in view of the possibility of chronic venous insufficiency and stasis dermatitis contributing to his condition.

Often patients are alarmed by the appearance of their skin, which leads to further avoidance of washing the area, thus ultimately worsening the problem and resulting in a vicious cycle. This was probably the case in our patient. Interestingly, a case of DN was reported involving the face, where the patient was in fact washing her face 12–15 times a day, but not drying her face after washing.10 Hence, adequate education of patients on how to cleanse the skin is important.

DN is a relatively common but under-reported entity. Greater awareness of this condition can spare patients from unnecessary and invasive investigations.