A 55-year-old Chinese woman presented to the ear, nose and throat clinic with a 6-month history of left-sided blood-stained mucus. It was dark brown with no epistaxis. There was no mucopus, nasal obstruction, facial pain or fever. She denies any history of hypertension, trauma, head and neck cancer, anticoagulation use or previous irradiation. Physical examination did not reveal any external nasofacial swelling or erythema, and extraocular movement was intact. Nasoendoscopy revealed a fleshy mass with overlying blood vessels arising above the left inferior turbinate, with septal deviation towards the right (Fig. 1). 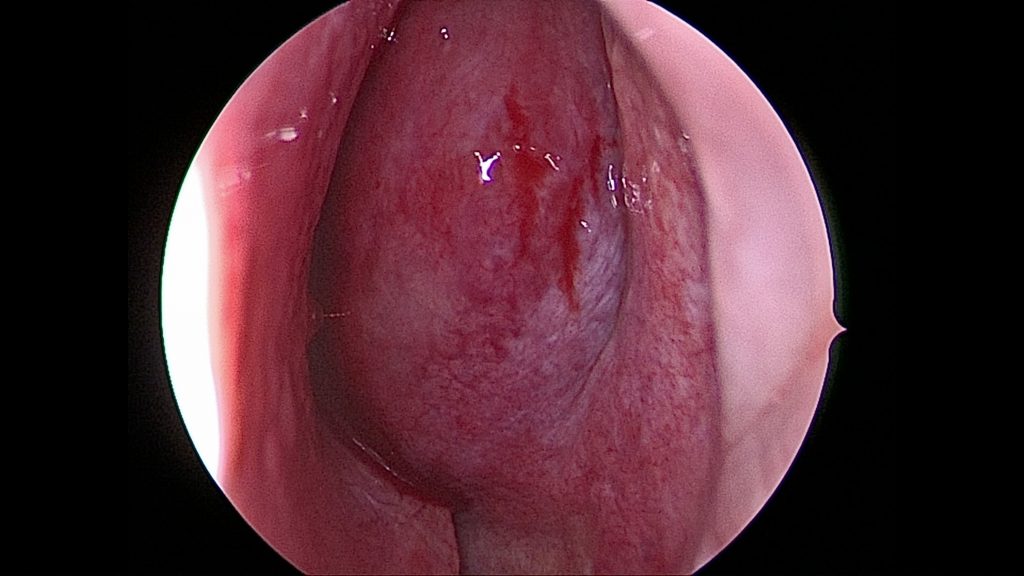 Fig. 1. Nasoendoscopic image of a nasal tumour with surface vessels.

A well-circumscribed lesion was seen in the left maxillary sinus on T2-weighted (Fig. 2) and T1-weighted magnetic resonance imaging (MRI) with contrast (Fig. 3), extending into the left nasal cavity with mass effect. The contents had serpiginous areas of marked enhancement, suggestive of areas of heterogeneous soft tissue density with interspersed blood vessels. As seen in Fig. 2, a T2-weighted MRI also depicts a hypointense peripheral rim. On computed tomography (CT) paranasal sinuses (Fig. 3), complete opacification of the left maxillary sinus is seen with medial and superior expansion with severely attenuated bony walls, particularly along the displaced left medial orbital floor and medial sinus wall, as well as a right septal deviation with no invasion into adjacent structures. 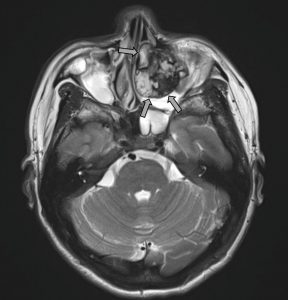 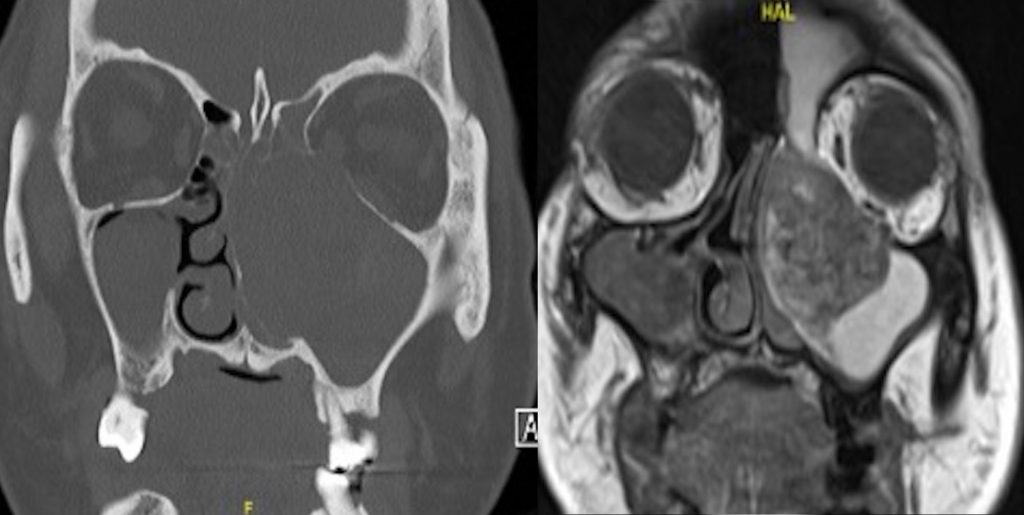 What is the diagnosis?

Ozaki et al. postulated the “Negative Spiral Theory” that illustrates how an OHMS is formed. Firstly, haemorrhage occurs in the maxillary sinus due to various causes, such as an underlying haemangioma, coagulopathy, trauma, radiation therapy, infection or inflammation. When necrosis and inflammation occurs, a fibrous capsule forms in the enclosed space, preventing the resorption of inflammatory cells and blood. Subsequently, hyalinisation and angiogenesis recur. As the cycle continues, the OHMS enlarges, causing mass effect and pressure erosion on surrounding structures.2

The diagnosis of OHMS described by Urata et al. consists of 4 criteria: (1) findings of nasal bleeding or obstruction and a unilateral, polypoidal nasal mass; (2) CT revealing an expanding maxillary lesion with thinning or destruction of surrounding bony wall; (3) MRI showing a heterogeneous mass; and (4) histopathological findings of dilated vessels, haemorrhage and fibrin exudation.3

OHMS are asymptomatic when localised to the maxillary sinus. Symptoms occur when they expand, erode and displace adjacent structures. Risk factors include an underlying haemangioma, bleeding diathesis, previous trauma, radiation, infection or inflammation, hypertension or anticoagulation use. Symptoms include epistaxis, unilateral nasal congestion, cheek swelling, retroorbital pain and blurring of vision. Nasoendoscopy may show a fleshy tumour with overlying telangiectasia. Gross examination may reveal ipsilateral proptosis and hypoesthesia over the ipsilateral maxillary region.4

It is important to note that OHMS is not typically a top differential diagnosis in a middle-aged patient presenting with a unilateral sinonasal mass with no history of trauma or anticoagulation use.

Radiologically, OHMS has a mixture of marked heterogeneous hypo-intensity and iso-intensity on MRI, surrounded by a hypo-intense peripheral rim, which matches histologically with a fibrous pseudocapsule. These findings reflect the histological heterogeneity of the lesion, which comprises haemorrhage, fibrosis and neovascularisation.5

While imaging features may overlap between haemangioma, angiofibroma and OHMS, the age and sex of the patient are atypical for a haemangioma and angiofibroma. Haemangiomas are the most common head and neck tumours in children, but rarely occur in the sinonasal cavity.6 The mass is also more anteriorly centred in the left maxillary sinus whereas an angiofibroma typically occurs around the sphenopalatine foramen, and almost always occur in young men. Enhancement in a large cavernous haemangioma or angiofibroma may be more marked than what is seen in this lesion. Mucocoeles are typically non-enhancing. Carcinoma has a solid pattern of nodular enhancement and typically shows invasive features extending into surrounding soft tissue as well as the ipsilateral ethmoid sinuses.8

Histopathological confirmation is required to rule out differentials. Histopathology for this patient revealed blood and fibrinous material, haemorrhagic and inflamed granulation tissue with underlying fibrosis, chronic inflammation and ectatic vessels with organising haematoma, consistent with the description of OHMS in literature.

Management of OHMS typically involves surgical resection, which is diagnostic and curative should the mass be resected completely. Bleeding diathesis must be optimised as OHMS may be haemorrhagic and cause massive bleeding. Both open and endoscopic approaches have been employed in the removal of this haematoma. Given its benign condition, most lesions are well circumscribed rather than infiltrative, and can be adequately addressed by an endoscopic middle meatal antrostomy.9,10