A 49-year-old man presented with a 2-month history of a rapidly enlarging left medial orbital mass. There was no local inflammation, pain, discharge, visual or nasal symptoms. On examination, there was a firm mass bulging between the left nasal bone medially and the left eye measuring 2x1cm in dimension (Fig. 1), with no overlying skin paresthesia or cervical lymphadenopathy. No punctum was seen. Nasoendoscopy was normal. There was no ophthalmoplegia or exophthalmos on clinical examination. 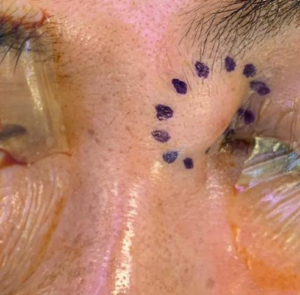 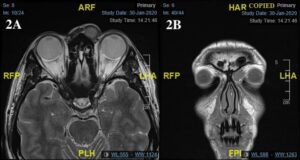 Findings and diagnosis. The patient underwent surgical excision via a lynch incision, and a fibrous tumour measuring 1.5×1.2cm was resected. It was attached to the medial canthal tendon but not invading the underlying bone. The lacrimal sac was not involved.

Histopathological examination showed fascicles of spindle cells in a fibrous stroma exhibiting focal myxoid change with no significant cytologic atypia. Mitoses were noted but no atypical mitoses were seen. Extravasated red blood cells were seen in the stroma. Immunohistochemical studies showed reactivity for smooth muscle actin and negative staining for desmin, CD34, HMB45, S100 protein and pancytokeratin AE1/AE3, in keeping with nodular fasciitis (Fig. 3). Although not done in our patient, when dedicated FNAC sampling with adequate cell block tissue is available, it is possible to obtain a definite diagnosis with molecular testing for USP6 gene rearrangements in an appropriate cytomorphological context.

While a specific FNAC-based diagnosis of nodular fasciitis is challenging, recent advancements have shown that cell block ancillary testing for USP6 gene rearrangement may be considered for confirmation of nodular fasciitis.6 These were first identified in aneurysmal bone cysts, and recently in nodular fasciitis, myositis ossificans and cellular fibrous tumours of tendon sheath. It suggests a benign and self-limiting condition, hence the final specific diagnosis has to be interpreted in appropriate clinical and cytomorphological contexts. To note, other conditions associated with USP6 gene rearrangements are very rarely described in the head and neck region.

Local excision of the nodular fasciitis is often performed as the disease can be completely resected, after which local recurrence is rare. Conservative management with observation is a possibility, and some cases have been known to resolve spontaneously.7 Some studies suggest the use of intralesional steroid injections or laser therapy, which may be useful as alternative treatments in areas where complete excision is difficult, or in aesthetically prominent areas such as the face.8 Recurrent masses are so uncommon that malignancies should be considered with careful reassessment of the original diagnosis.9 Our patient has been followed up for 1 year with no recurrence of the lesion. He has no epiphora and the incision has healed well.

Nodular fasciitis is an uncommon but possible differential for a subcutaneous periorbital lesion. The correct diagnosis helps in avoiding overtreatment of these lesions.

Noninvasive follicular thyroid neoplasm with papillary-like nuclear features and the risk of malignancy in thyroid cytology: Data from Singapore

Enlargement of the Right Maxilla – Report of an Unusual Peripheral Osteoma

Noninvasive follicular thyroid neoplasm with papillary-like nuclear features and the risk of malignancy in thyroid cytology: Data from Singapore

Enlargement of the Right Maxilla – Report of an Unusual Peripheral Osteoma