A 56-year-old Chinese man presented to the Ear, Nose and Throat clinic with months of unilateral right-sided nasal obstruction. He reported occasional mucopurulent discharge and denied any hyposmia, episodes of epistaxis, or loss of weight and appetite. Nasoendoscopy revealed a right-sided nasal mass between the septum and middle turbinate. Magnetic resonance imaging (MRI) showed a 6.9cm right nasal cavity mass extending from the cribriform plate to the hard palate inferiorly, laterally abutting the ostiomeatal unit and medially abutting the nasal septum. No intracranial or orbital wall extension was seen (Fig. 1). 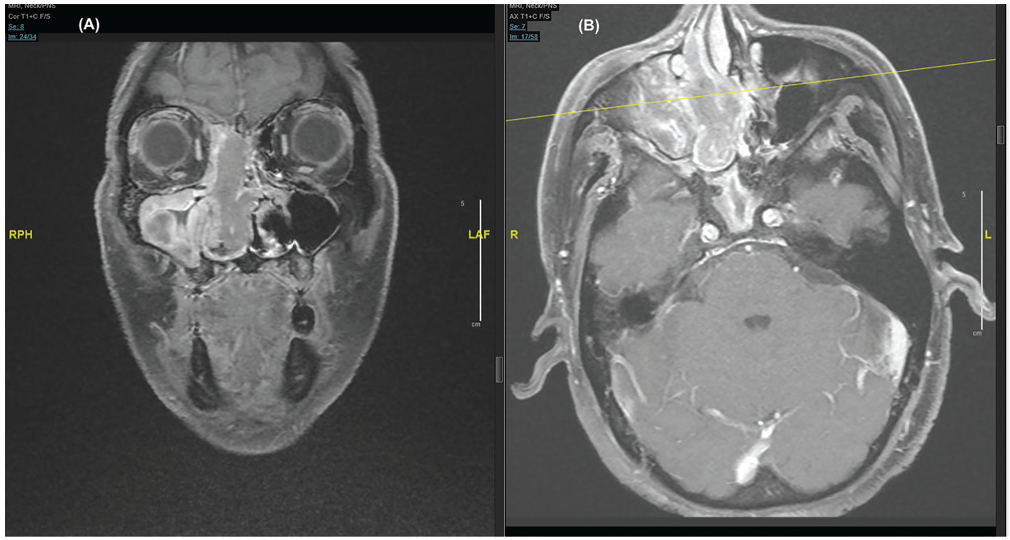 Fig. 1. Coronal (A) and axial (B) views of T1-weighted magnetic resonance imaging with contrast.

The patient underwent an open craniofacial resection with clear margins on the intra-operative frozen section, as well as a staged bilateral modified radical neck dissection that yielded no nodal metastases. This was followed by adjuvant radiotherapy. Unfortunately, the patient developed a local recurrence in the left nasopharynx 6 months post-radiotherapy for which he underwent a salvage endoscopic nasopharyngectomy.

A second local recurrence occurred one year post-nasopharyngectomy in the right nasopharynx for which he declined further surgery. Since then, regular office debridement and topical 5-fluorouracil (5-FU) have become the mainstay of treatment for this patient (Fig. 2), which has achieved good control with varying frequencies of application over the last 8 years (Fig. 3).

Fig. 2. Nasoendoscopic images of nasal tumour at right fossa of Rosenmüller before and after debridement, and subsequent 5-fluorouracil application.

On surveillance MRI (after 8 years of topical 5-FU application), a persistent but stable right fossa of Rosenmüller mass was noted. 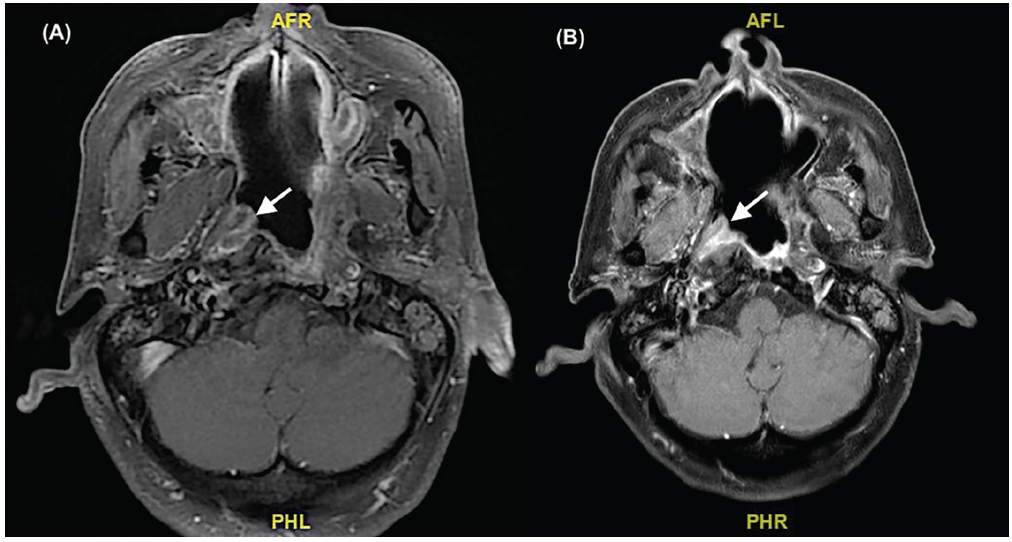 Fig. 3. Axial views of T1-weighted magnetic resonance imaging with contrast taken in 2012 after left nasopharyngectomy (A) and after 8 years of topical 5-FU application (B). White arrow marks the tumour, which has not changed in size due to the topical regime.

Which sinonasal tumour is known to be locally controlled by the topical application of 5-FU?

Sinonasal adenocarcinoma (SNAC) is an uncommon malignant tumour, making up only around 10–20% of malignant tumours originating from the sinonasal space, coming second only to sinonasal squamous cell carcinoma (SCC) in incidence across the world. Cancers of the paranasal sinuses are extremely uncommon, making up only 3% of total head and neck malignancies. While the incidence of SNAC has always been reported to be more common in men, presumably supported by the higher likelihood of men being involved in work environments with known risk factors, recent studies1 report that the incidence is similar in both men and women.

SNAC can arise from seromucinous glands and the surface epithelium of the sinonasal tract. According to the World Health Organization, classifications of adenocarcinomas can be split into salivary-type and non-salivary-type carcinomas, of which the latter involves either intestinal or non-intestinal subtypes. Intestinal-type adenocarcinoma, which the patient had, bears histological and immunohistochemical resemblance to the mucosa of small and large intestines. The association of long-term occupational hardwood-dust exposure with the development of SNAC,2 in particular the intestinal type, has been widely established in the literature.

In general, SNAC commonly arises from ethmoid sinus3 and tends to present late though tumours in other sinuses can also have a late presentation unless picked up incidentally. Common manifestations include nasal obstruction, bloody discharge, anosmia, and extension into adjacent tissue can cause vision loss and exophthalmos. Identifying4 the tumour is more challenging because of its location and the non-specific nature of symptoms. Computed tomography (CT) and MRI are complementary tests for localising and determining the size and extension of the tumour, especially in key structures5 such as orbital apex, dura mater and beyond. The risk of regional and distant metastases of the tumour has been described to be low, which according to current literature3,6 ranges from 2–10%. Positron emission tomography/CT was previously done to assess for distal metastasis, but the focus was more on MRI for this patient to determine the local control achieved by topical 5-FU application.

The imaging features7 of adenocarcinomas are often indistinguishable from those of other sinonasal cancers. Both SCC and SNAC can commonly appear as solid, heterogeneous masses with areas of necrosis and irregular margins with osseous destruction.

Sinonasal tumours can be managed in various manners. Surgical removal usually entails a craniofacial resection (CFR), especially for tumours extending into the anterior skull base. Approaches include open, endoscopic and combined. The open approach is more likely to be employed with increasing brain involvement by the tumour. However, an endoscopic approach has been reported to allow clearer visualisation of limits8 and attachment sites of the mass, hence a more precise resection and a hybrid approach may therefore be appropriate in some cases.

For SNAC,9 the utility of repeated application of 5-FU as a chemotherapy agent has been reported to be a good alternative to surgery and offers excellent results with a 5-year disease-free survival rate of up to 87%. The general principles include regular necrotomy (which can be done in the clinic) and the application of 5-FU over areas of possible tumour involvement.

Based on current literature,9,10 the frequency of initial topical 5-FU application was not well defined, but varied from a regimen of once weekly for 6 weeks before monthly follow-up and regular tissue biopsies, to a regimen of twice-weekly for a total of 4 weeks (accounting for 8 sessions in total) followed by a 2-month break before the endoscopic inspection. Here, a weekly therapy was initiated for a total of 6 sessions before a rest of 3 months. Subsequently on follow-up, the treatment intervals were lengthened to a monthly regime. Due to a high risk of local recurrence, treatment duration is anticipated to be lifelong for this patient.

In summary, SNAC can be well controlled with regular debridement and topical application of 5-FU. Such a treatment regime may allow the avoidance of major surgery in a poor surgical candidate, as well as provide long-term control of recurrences post-surgery. In general, resection of the tumour would be preferred whenever ideal. Topical 5-FU application would be best employed in smaller areas that are unresectable, or in this case where the patient refused surgery.