Symptomatic haemorrhoids is the most common anorectal disorder, where up to 75% of people experience symptoms sometime in their lives.1

The current gold standard for the surgical management of haemorrhoids is the Milligan-Morgan haemorrhoidectomy,2 with unrivalled long-term results.3 However, the technique is associated with significant postoperative pain,4,5 leading to delayed return to normal activities and readmissions.

The authors would like to describe our initial experience and evaluate the short-term effectiveness of LHP in Singapore. This initial assessment was conducted during the familiarisation period that preceded a single-centre randomised controlled trial (RCT) (NCT04329364) comparing LHP to COH. All patients presenting with symptomatic haemorrhoids were evaluated for suitability. Inclusion criteria included patients aged 21–90 years with symptomatic grade II–IV haemorrhoids; those willing to attend follow-up visits; and patients who were able to complete postoperative monitoring questionnaires. Exclusion criteria included patients on anticoagulation and those with previous surgical treatment (excluding rubber band ligations). Patients would undergo endoscopic evaluation to ascertain symptoms were attributed to haemorrhoids alone.

LHP is performed as an elective day surgery under general anaesthesia by colorectal surgeons. The procedure is performed with LEONARDO Laser Dual 45 (biolitec AG, Vienna, Austria) using a 1470nm diode laser wavelength. Mucopexy is done as an adjunct prior to laser treatment, to address the external or prolapsed component of the haemorrhoids. It is performed by placing a vicryl 2/0 stitch starting above the dentate line and progressing proximally to hitch haemorrhoidal tissue proximally; no tissue excised. The laser probe is then introduced by direct puncture into the haemorrhoidal cushion under direct vision to a level higher than the dentate line, aided by the guiding beam emitted from the laser probe. The laser treatment uses the “pulsed treatment mode” with power of 10–15W and pulse durations of 3 seconds each. After each laser firing, the haemorrhoidal pedicles are compressed with finger for 3 minutes, and iced in glove for 2 minutes. The probe is then withdrawn by 5mm, resulting in a cylindrical treatment area. After treatment, a lubricated Spongostan (Johnson & Johnson, US) is inserted to tamponade the operative area. Postoperatively, patients will be prescribed oral metronidazole, analgesia, stool softeners and Daflon.

Postoperative pain was recorded using a visual analogue scale (VAS), where 0 represents no pain and 10, the worst pain imaginable. VAS scores were collected every day from postoperative day (POD) 0 to POD10.

Overall, there was a downward trend in the mean score for postoperative pain (Fig. 1). The mean score for POD0 was 2.6, and gradually decreased towards POD10, where the mean score was 0.8. The results showed that most patients had little to no pain by POD7 (mean score 0.8). From POD0–POD5, the maximum pain score of 6 can be explained by a patient who experienced pain from a thrombosed haemorrhoid post-LHP, requiring analgesic adjustment without further intervention. Subsequent review at 3-months showed resolution of the thrombosis. 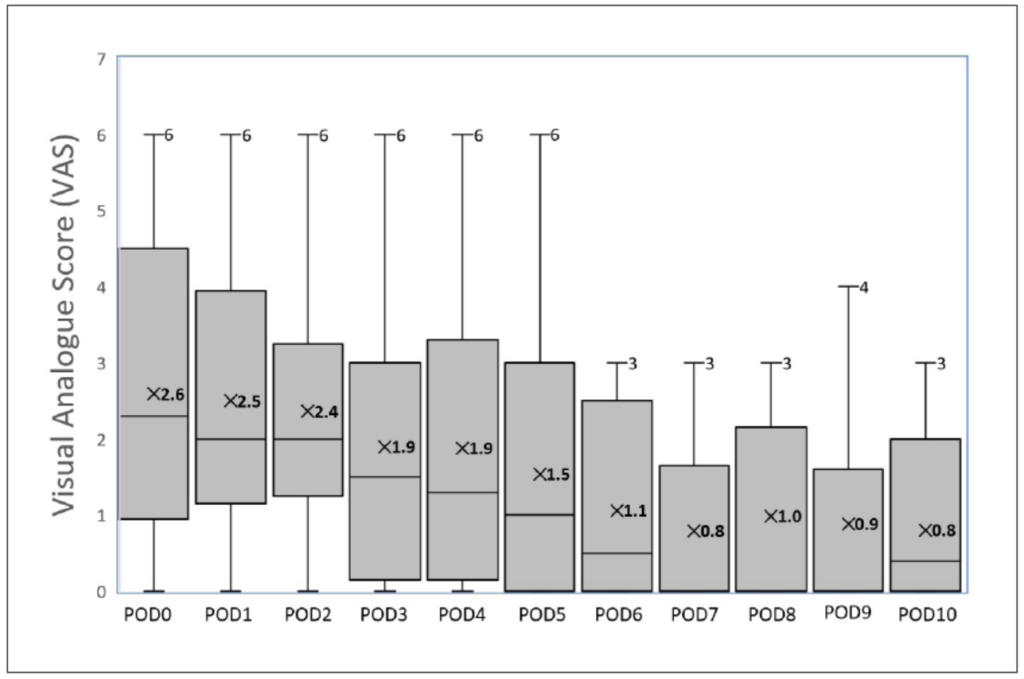 There were no intraoperative adverse events. Postoperative complications that required re-admission occurred in 2 patients (15.4%). The first had acute urinary retention secondary to severe benign prostate hyperplasia and was managed by urology. The other was for thrombosis of remnant haemorrhoidal tissue requiring analgesia adjustment as mentioned before.

The results from our initial experience show that LHP is effective in addressing symptoms faced by patients with haemorrhoids. It is also a safe procedure with minimal postoperative complications. There was no return to the operating theatre and no sphincter injury noted from this pool of patients. Postoperative pain was minimal (low mean VAS score) and resolved within 1 week postoperation. While not a direct comparison, this initial experience potentially shows that LHP has less postoperative pain. In contrast, COH usually causes significant postoperative pain because of wide external perianal wounds, with pain lasting up to 2 weeks.4,5

Preliminary studies have shown significantly better postoperative pain scores and less bleeding risk7,10 in LHP. However, none has addressed the QoL and longer-term outcomes of LHP in comparison to COH.

Limitations in our study include the small number of reviewed cases, hence may not be representative of the population. There is no control group thus the inability to do direct comparison to confirm the suggested benefits in terms of efficacy as well as less postoperative pain.

LHP is a relatively new technique in Singapore; thus, surgeons are still mounting the learning curve during this study. Despite that, the early outcomes of LHP are already favourable, with its promise of being a new approach towards treating haemorrhoids. The initial study shows that LHP has the potential to be as effective as COH, without the latter’s inconvenience. The Colorectal Department of Sengkang General Hospital, Singapore is currently doing a RCT (NCT04329364) to compare LHP and COH, with follow-up of up to a year. We look forward to seeing favourable short- and long-term results from the trial.