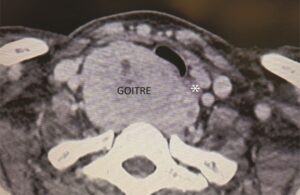 Discussion. The recurrent laryngeal nerve (RLN) is normally located posterior and medial to the thyroid lobe.1 The incidence of a superficial, lateral course of the RLN has been reported as 6–7% in primary thyroidectomy cases. This is always in associated with a tubercle of Zuckerkandl, where the nerve passes anterolaterally over the tubercle.2,3 Anterior lying nerves have also been reported in redo cases.2

In our patient, intraoperatively, there was a large right multinodular thyroid gland, which was retro-oesophageal and retrosternal. Here we describe and show photographic evidence of a recurrent nerve that runs directly anteriorly, over the direct ventral surface of the thyroid lobe (Fig. 2). The occurrence of this in a previously unoperated patient is exceedingly rare, and to our knowledge there are no cases with photographic evidence reported in the literature. 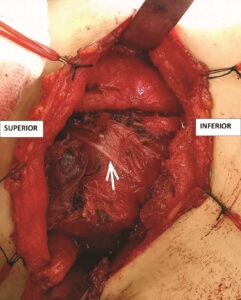 On the right side of the neck, the nerve travels lateral to medial as it ascends at an angle towards the trachea-oesophageal groove and then parallel to it. As such, there is a potential space (both superficial and deep to the RLN) especially in the inferior central compartment. In our case, a retrograde posterior growth of the lobe that extended deep onto the nerve displaced the nerve to a more ventral location.

This case highlights that in a large thyroid nodule that is extending posteriorly (in this case retro-oesophageal as well), the surgeon has to consider the unlikely but possible situation of the nerve being anterior to the gland. 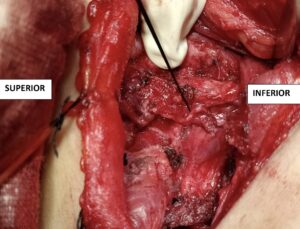 In this case, the superficial and anterior lying position of the nerve was not obvious. There was a layer of fascia over the nerve that obscured the nerve visually. However, in anticipation of the neve being pushed to an unusual position, the surgeon with the aid of an intermittent nerve monitor found the nerve running directly anterior to the gland.

In general, the recurrent laryngeal nerve may be found in a more unusual location in a large multinodular goitre, and safe identification of the nerve can be achieved by finding it in a location where it is more consistent, such as the cricothyroid joint. The nerve can also be better preserved if one performs a capsular dissection, keeping very close to the gland to avoid injury to the nerve.4

To our knowledge, this is one of the first cases that demonstrates photographic evidence of a purely ventral lying nerve in a previously unoperated case in the literature. This case clearly highlights the specific configuration of a very large thyroid nodule that is growing posteriorly, especially a retro-oesophageal nodule, in which the surgeon has to be aware that the nerve may be in an unexpected position. Intermittent nerve monitoring may be a useful adjunct in this scenario.5