An 84-year-old woman presented with a left breast mass that had been rapidly growing over a few months. On clinical examination, there was a large and firm left breast mass with no overlying skin change. The right breast was normal. The patient was treated in accordance with the Declaration of Helsinki, and Institutional Review Board approval was obtained.

The patient was evaluated with mammography (Fig. 1) and ultrasound scan of the left breast (Fig. 2). 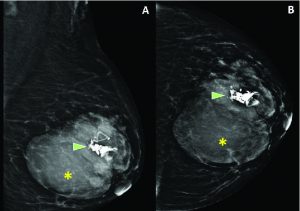 Fig. 1. Mammogram of the left breast (A) mediolateral oblique and (B) craniocaudal views show a lobulated mass (asterisks) occupying most of the breast. No spiculations are seen. The mass contains a prominent cluster of almost bone-like coarse calcifications, which appear very thick, haphazard in pattern and sharply angulated (arrowheads).

No axillary or distant metastases were detected on staging computed tomography.

Ultrasound-guided core needle biopsy through the solid component was performed. Microscopic examination revealed leaf-like stromal fronds with a spindle cell proliferation suggestive of a phyllodes tumour (PT) (Fig. 3). There was microscopic ossification, but no abnormal stromal cells with significant atypia were seen associated with the bone, thus favouring a benign osseous metaplastic process. Excision was advised to exclude underlying malignancy of the phyllodes tumour. In view of its large size and risk of inadequate margins, the patient underwent a mastectomy.

Pathology of the mastectomy specimen showed a malignant PT with a heterologous osteosarcomatous component (Fig. 4). 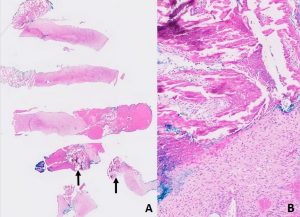 Fig. 3. (A) Core needle biopsy of the breast mass shows a spindle cell lesion with areas of ossification (arrows). (B) High magnification of the ossified portion shows association with spindle cells with relatively bland cytologic features.

Fig. 4. (A) Histopathology of the tumour in the resected mastectomy specimen at low magnification shows characteristic stromal fronds from the phyllodes tumour. It contains haphazard bony trabeculae (arrow), which correspond with the calcific pattern seen on mammography. (B) High magnification shows anastomosing pink osteoid (arrow) among abnormal cells with discernible mitoses, consistent with malignant osteoid production in osteosarcoma.

Discussion. In an elderly patient presenting with a rapidly enlarging breast mass, the important diagnostic differential considerations will be phyllodes tumour, primary breast sarcomas, medullary carcinomas and any type of high-grade invasive cancers.

Medullary carcinomas are known to be rapidly growing and can present as circumscribed lobulated masses. However, they are not typically associated with calcifications, hence this diagnosis is unlikely.1

Fat necrosis, which is typically associated with trauma or intervention, has a variable imaging appearance. It can develop as an irregular, spiculated mass or demonstrate clustered microcalcifications, and overlap with the imaging appearance of malignancy. However, the mass usually contains fatty radiolucent areas, and the calcifications are characteristically peripheral at the rim. Its sonographic appearance is non-specific. It can appear as an anechoic cyst, solid mass or a complex solid-cystic lesion, and should be correlated with the mammogram findings.2 In this case, the dense solid component lack fatty radiolucent elements and the calcifications are unlike those associated with fat necrosis, which are usually dystrophic or rimmed in appearance with lucent centres.

Fibroadenomas and PT are both fibroepithelial lesions, and have overlapping radiological and histological features. However, giant fibroadenomas ≥5cm in size are seen in younger premenopausal women and do not grow after menopause. On imaging, fibroadenomas tend to be smaller (<4cm) and are usually wider than tall in orientation. Both lesions can have lobulated margins but PT tends to have bulging borders.3 Involuting fibroadenomas can also demonstrate coarse, popcorn-like calcifications that are >2mm in size. These calcifications typically show smooth margins, unlike the irregular and angulated margins seen in this case. Intra-tumoural cystic components are usually due to clefts between the bulging nodular protuberances, and are more commonly seen in PT compared to fibroadenomas. Cystic infarctions in rapidly growing fibroadenomas and PT may also give rise to cystic areas.3

PTs are rare fibroepithelial neoplasms that account for <1% of all breast neoplasms, usually affecting women 40–50 years of age.4 Based on the histological characteristics, which include nature of the tumour borders, degree of stromal cellularity, stromal overgrowth, cellular atypia and the number of mitoses per 10 high power fields, they are classified into benign, borderline and malignant categories.

PT commonly presents as a large, rapidly growing mass. Features of a regular shape with generally circumscribed margins that lack spiculations help differentiate it from other invasive breast malignancies.6 The margins of PT also tend to be bulging and lobulated due to stromal protuberances.6 Ill-defined margins and intra-tumoural cystic spaces, as demonstrated in this case, favour malignancy. Although coarse calcifications have been reported in PT, they are rare due to rapid tumour growth.7

Other imaging differentials include primary breast sarcomas and metaplastic breast carcinoma. Primary breast sarcomas are a heterogeneous group of mesenchymal tumours without epithelial components, which include angiosarcoma, osteogenic sarcoma, fibrosarcoma, liposarcoma and malignant fibrous histiocytoma.9 Metaplastic carcinoma is an invasive carcinoma with mesenchymal and epithelial components, and shows coexistence of matrix-producing, spindle cell, sarcomatous or squamous differentiations. Both types of tumours can present as a large rapidly growing mass of regular shape with circumscribed, lobulated margins.10-12 They may appear as solid-cystic masses on sonography,10,13 and may have coarse calcifications if there is osseous heterologous differentiation, similar to the case presented. Metaplastic breast carcinomas tend to be associated with stromal distortion.14 Both types of tumours are rare, accounting for <1% of all breast cancers; phyllodes tumours are relatively more common in comparison.

On microscopy, malignant osteoid formation can be mistaken as collagen, especially when the osteoid is not calcified. Also, if histological ossification is not accompanied by malignant cells, interpretation as a benign metaplastic process is likely. There may be undersampling with core needle biopsies, further contributing to the challenges of accurate recognition. Knowledge of the radiological features can help alert the pathologist to the possible malignant nature of the tumour. Presurgical diagnosis of a malignant PT will be useful for surgical planning, especially if a wide local excision is planned. Surgery should aim to achieve negative margins for malignant PT to reduce the risk of local recurrence. Wide local excision with 10mm margins, without axillary staging, is the current recommended treatment according to the recent US National Cancer Comprehensive Network guidelines.15

Serum Selenium in the General Population of Singapore, 1993 to 1995

Measuring Quality of Life in Chinese Cancer Patients: A New Version of the Functional Living Index for Cancer (Chinese)

Serum Selenium in the General Population of Singapore, 1993 to 1995

Measuring Quality of Life in Chinese Cancer Patients: A New Version of the Functional Living Index for Cancer (Chinese)