Sarcoidosis is a multisystem, granulomatous disorder of unknown aetiology. It affects the lungs in 90% of cases, but is also known to affect other organs including the skin, liver, spleen, kidneys and heart.1 Cardiac sarcoidosis (CS) is thought to clinically affect 5% of those with sarcoidosis, manifesting as conduction abnormalities, ventricular arrhythmias, heart failure and sudden cardiac death.2,3 A further 20–25% of people with sarcoidosis are thought to have clinically silent CS.4 Hence, there is a clinical need for the early recognition and intervention of CS.

A 34-year-old Chinese woman presented to our cardiac clinic with a 1-month history of pre-syncopal symptoms, described as a sensation of “roller coaster” giddiness, and 4 subsequent episodes of transient loss of consciousness. She had also been experiencing intermittent palpitations, exertional breathlessness and lethargy. Prior to this, she was well with no infective prodrome or intercurrent illness, no relevant past medical history and no family history of heart disease. 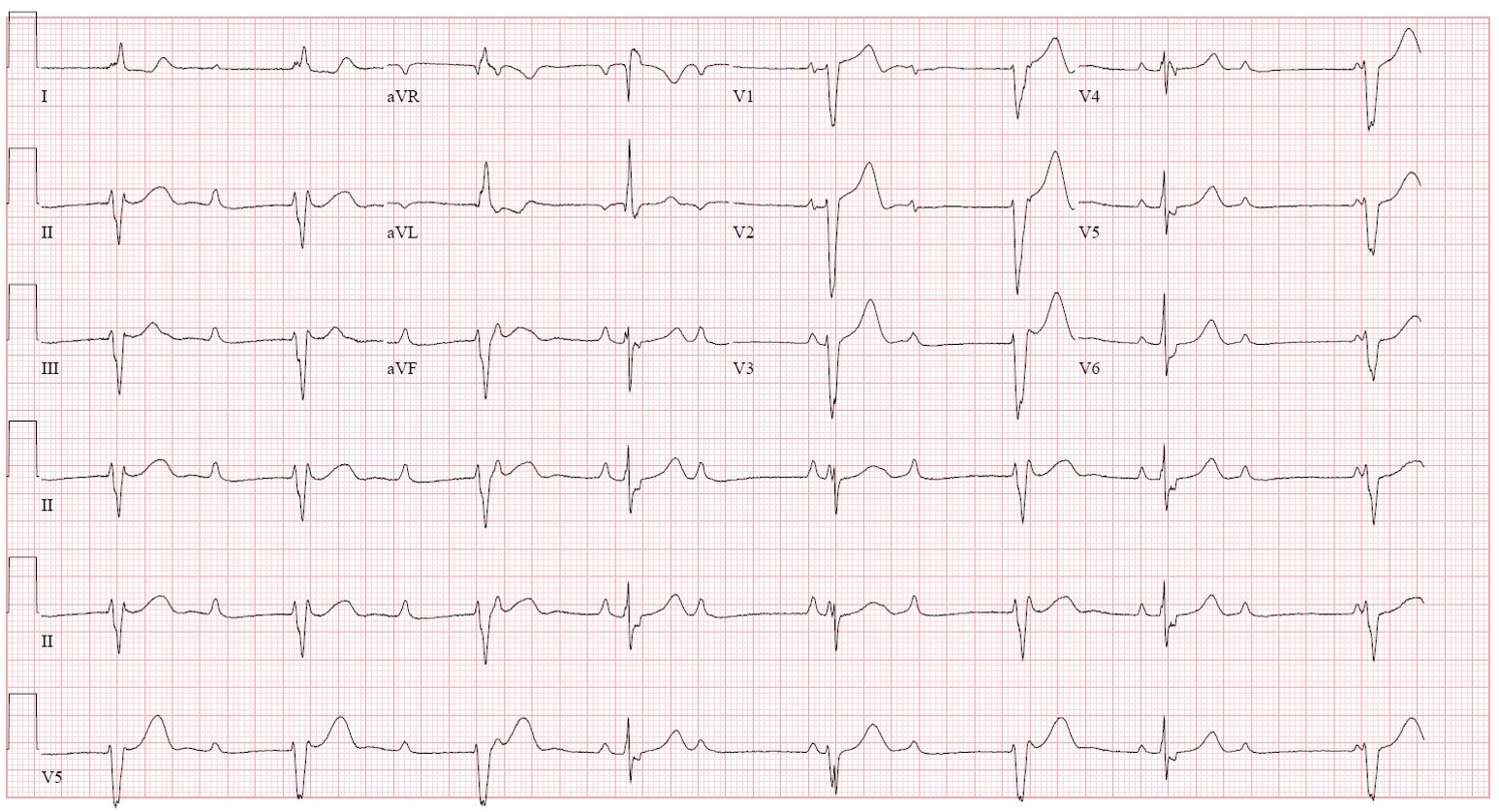 Her troponin I levels were elevated at 52.1ng/mL (normal <14ng/mL). The remaining admission blood tests, including calcium levels, antinuclear antibody and thyroid screen were unremarkable.

Given the elevated troponins and the fortuitous availability of a slot for a cardiovascular magnetic resonance imaging (CMR) scan, a CMR was performed to look for myocarditis before a transthoracic echocardiogram (TTE) was performed. The CMR showed a left ventricular ejection fraction (LVEF) of 52% and extensive, near transmural late gadolinium enhancement (LGE) in the basal anterior and inferior ventricular septum, and in the mid-ventricular septum at the mid-cavity level (Fig. 2). The basal ventricular LGE extended into the mid-myocardial and subepicardial layers of the basal anterior left ventricular wall. There was also subendocardial LGE in the mid-cavity anterolateral left ventricular wall, and in the anterolateral papillary muscle. These regions of LGE corresponded to areas of increased signal intensity seen on T2-weighted short-tau inversion recovery images. Together, these findings were in keeping with extensive inflammation. The potential aetiologies included a viral or autoimmune myocarditis and sarcoidosis. A subsequent TTE revealed the same findings, showing evidence of scarring of the anterior septum and thinning of the basal septum, regional wall motion abnormalities and mild left ventricular systolic dysfunction, with an ejection fraction of 50%. 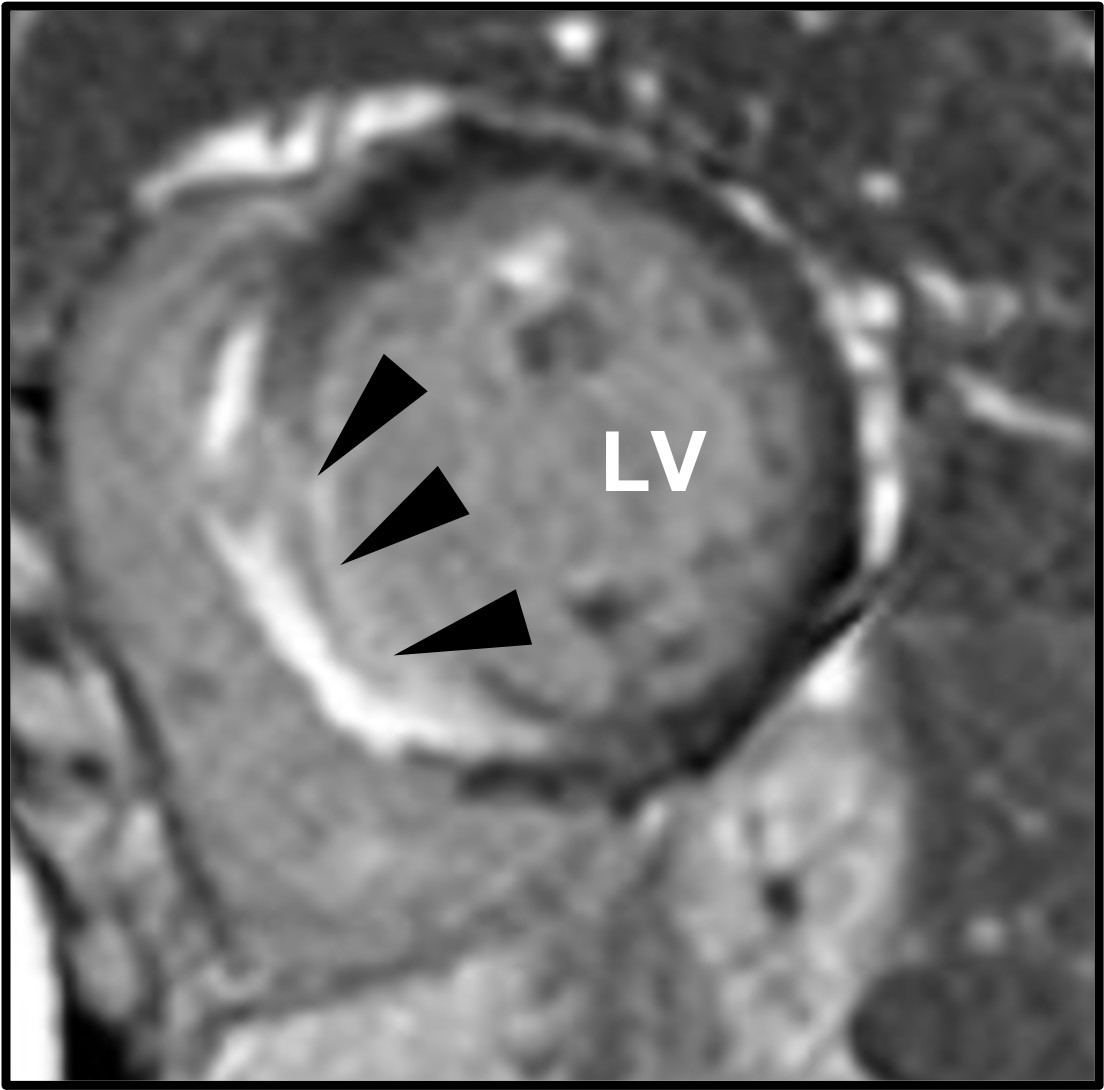 A coronary angiogram performed revealed normal coronary arteries. An endomyocardial biopsy (EMB) was also performed, which demonstrated mild interstitial oedema but no discernible fibrosis. In particular, there was no inflammatory infiltrates or granulomata, nor was there any myofibre disarray, increased glycogen, haemosiderin, or amyloid deposits. A fluorodeoxyglucose (FDG)-positron emission tomography (PET) scan was performed, which showed heterogeneous mild to moderately increased FDG avidity along the septal wall and basal segment of the anterior wall of the left ventricle (Fig. 3A). It also revealed an FDG-avid splenic lesion close to the hilum, for a suspicion of splenic involvement. 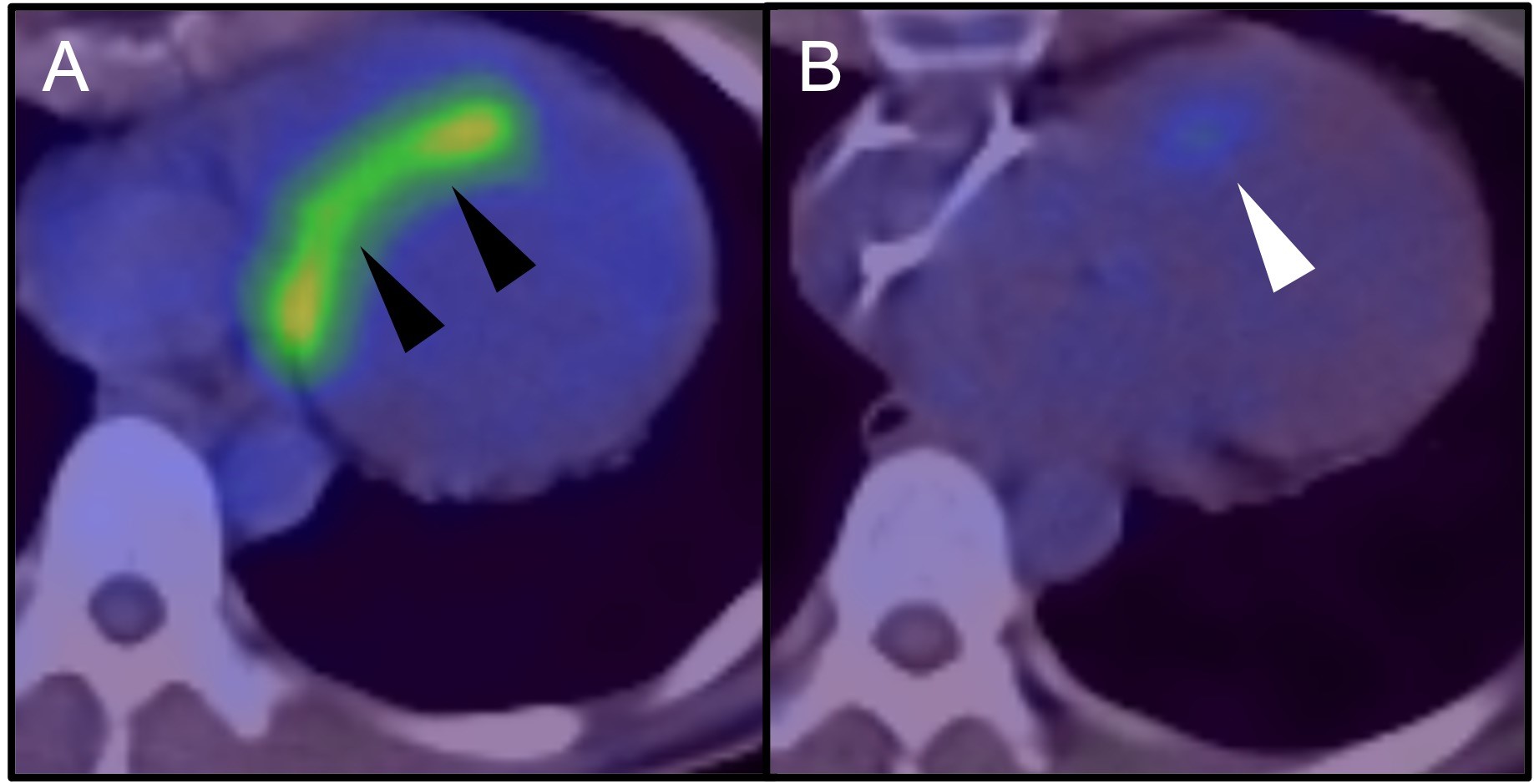 Fig. 3. (A) Fluorodeoxyglucose (FDG)-positron emission tomography (PET) of patient. There is FDG-avidity seen in the interventricular septum prior to initiation of treatment (black arrowheads). (B) After 14 months of methotrextate treatment following initial steroid treatment failure, only faint non-specific FDG accumulation is seen in the interventricular septum, indicative of remission (white arrowheads).

A diagnosis of CS was made, and the patient underwent implantation of a dual chamber implantable cardioverter defibrillator (ICD) for her symptomatic heart block, as well as for primary prevention of sudden cardiac death. She was also commenced on high-dose steroids.

A repeat FDG-PET scan after 6 months of high-dose steroid treatment however showed a persistence of FDG-avidity in the left ventricular myocardium, although the splenic lesion was no longer seen. A repeat EMB was performed, which again did not show any granulomatous inflammation, with only focal fibrosis and myocyte hypertrophy seen. Our patient was commenced on methotrexate therapy, with a gradual tapering of steroid dose. A repeat FDG-PET scan performed 14 months after methotrexate therapy showed regression of the cardiac inflammation, with only a non-specific increase in FDG accumulation along the interventricular septum (Fig. 3B). Our patient was subsequently put on a tapering dose of methotrexate, with a view of discontinuation of therapy if sustained remission was achieved.

Sarcoidosis is a rare disease, with a prevalence that varies with ethnicity and geographical location. In the US, the prevalence of sarcoidosis was found to be 60 cases per 100,000 from 2010–2013.5 However, the prevalence ranged from as high as 141.4 per 100,000 in African Americans, to 49.8 in White individuals. The prevalence in Asians was even lower, at 18.9 per 100,000. A nationwide case-control study in Taiwan identified a very low prevalence among the predominantly Chinese population, at 2.17 per 100,000 people.6 As aforementioned, CS is even rarer, clinically affecting 5% of those with sarcoidosis.

The Heart Rhythm Society (HRS) has outlined 2 pathways for diagnosing CS—histological and clinical. Histological diagnosis involves the presence of the hallmark non-caseating granuloma on myocardial tissue without an alternative cause. Clinical diagnosis of probable CS is achieved in the presence of histological evidence of extracardiac sarcoidosis, in addition to other causes being reasonably excluded, and the presence of corticosteroid and/or immunosuppressant-responsive cardiomyopathy or heart block; unexplained reduced ejection fraction (<40%); unexplained sustained ventricular tachycardia; Mobitz type II second-degree heart block or third-degree heart block; patchy uptake on dedicated cardiac PET; LGE on CMR; or a positive gallium uptake.7

Apart from the PET-computed tomography (CT) demonstrating a possible splenic involvement, our patient presented with isolated cardiac sarcoidosis (ICS), and would not have met the criteria for diagnosis. ICS is thought to affect between 27 and 54% of patients with CS.8 In 2016, the Japanese Circulation Society updated their guidelines to accommodate for ICS (Table 1).9

Histological evidence provides a definitive diagnosis of CS, but presents its own challenges. Owing to the patchy nature of the disease, sensitivity of EMB in diagnosing CS is low, at 20–30%.10,11 This was exemplified in our patient’s case, where 2 EMB attempts, months apart, were non-diagnostic. EMB, assisted by electroanatomic mapping, has also been used to improve diagnositic sensitivity. However, a systematic review of this strategy showed only a possible increase in diagnostic yield to 39% on per-patient analysis.12

Hence, unsurprisingly, imaging remains a mainstay of CS diagnosis. TTE is readily available in most centres and is often employed as the first line imaging modality in suspected CS. Apart from thinning of the ventricular septum described above, other findings in CS include ventricular aneurysms and regional wall motion abnormalities. However, abnormal TTE finding is not ubiquitous in CS, with some studies identifying TTE abnormalities at between just 14 and 41% for patients with CS.13 Furthermore, Freeman et al. demonstrated the negative predictive value of abnormal TTE findings to be just 32% when used to exclude CS.14 This demonstrates again the need to employ multiple modalities in CS diagnosis. CMR and FDG-PET scans are both viable options, with studies to compare their diagnostic utilities proving equivocal thus far.15,16 CMR findings consistent with CS include LGE, myocardial oedema, and ventricular wall thinning. Of these, LGE is the most common, with the extent of showing high positive and negative predictive values for serious cardiac events including malignant arrhythmias and sudden cardiac death.17 PET-CT is an alternative to CMR and may be chosen for patients with pacemakers or ICDs in situ, or those with advanced renal impairment (in view of gadolinium being involved in CMR). PET-CT may also be useful in monitoring ongoing inflammation in response to therapy.19

Steroids remain the first line of treatment for CS, with demonstrable benefits in reducing heart failure admissions, and in slowing down the worsening of left ventricular systolic function.21,22 The beneficial effect of steroids is greater when LVEF is more than 35%, suggesting a reduced effect in more severe fibrosis.23

Unusually, for our patient, a repeat PET-CT 6 months after the initiation of steroids showed diffuse intense FDG avidity in the left ventricular myocardium, indicative of non-responsiveness to therapy. She was then started on methotrexate, with a follow-up PET-CT demonstrating treatment response. Although there have been documented cases of steroid non-responders, the percentage of CS patients who are unresponsive to steroids is not known. Of the non-steroidal immunosuppressants that form the second line of treatment, methotrexate has the largest evidence base. Alternatives would have included cyclosporine, azathioprine, and tumour necrosis factor-inhibitors such as infliximab and adalimumab.24 These corticosteroid-sparing agents would provide an alternative to avoiding the multitude of side effects associated with chronic steroid use.

Regarding the use of a cardiac implantable electronic device, our patient had a definite indication for pacemaker implantation, given that she had symptomatic complete heart block. A primary prevention ICD was thus implanted in her, a class IIa indication as per the HRS recommendations. Class I indications for ICD include spontaneous sustained ventricular arrhythmias, or a LVEF of 35% or less despite optimal medical therapy and a period of immunosuppression. Conversely, the HRS consensus does not recommend ICD to those without a history of syncope, with normal LVEF, no LGE on CMR, a negative electrophysiology study, and no indication for permanent pacing. It is also not recommended for patients with incessant ventricular arrhythmias, and New York Heart Association class IV heart failure.7

Lastly, with regards to biomarkers in CS, elevated serum angiotensin-converting enzyme (ACE) levels have long been associated with sarcoidosis.25 Despite this, serum ACE has a limited role in the diagnosis of sarcoidosis, in view of its low sensitivity (41.4%) and specificity (89.9%) from 1 study.26 Rather, serum ACE levels may be used to monitor disease activity in those known to have sarcoidosis.27 The association of serum ACE with CS is even lower, with 1 study finding elevated serum ACE levels in just 24% of patients with CS and 15% with ICS.28

In summary, we present a case of a 34-year-old woman with symptomatic complete heart block. Although the CMR and FPG-PET findings were highly suspicious for CS, repeated EMBs were non-diagnostic. Our patient failed to respond to the standard therapy of steroids and was started on methotrexate to good effects. The present case highlights the diagnostic challenges of CS, demonstrating the importance of follow-up imaging to closely monitor for treatment response.