Circular RNAs (circRNAs) are a group of endogenous RNAs characterised by their covalently closed-loop structures. These molecules are part of a large class of non-coding RNAs that includes microRNAs (miRNAs) and long non-coding RNAs (lncRNAs). CircRNAs were initially thought to be of low abundance and represent errors in splicing. However, recent interest in these molecules, coupled with advancements in sequencing techniques, has led to the identification of thousands of specific circRNAs among many eukaryotes. The high abundance, stability and conservation of circRNAs between species suggest that these molecules may have important roles in physiological processes and pathological conditions.1 They are increasingly recognised as having important functions in gene regulation, and these RNAs have been implicated in the pathogenesis and progression of a variety of diseases, specifically in cancers, cardiovascular conditions, neurological disorders and infectious diseases.2 Thus, there is  great interest in investigating circRNAs as potential disease biomarkers and novel therapeutic targets.

Recent advances in high-throughput sequencing techniques and bioinformatics approaches have spurred the identification of a large number of previously unknown circRNAs in different organisms and conditions. Unlike linear RNA, the 3’ and 5’ ends in circRNAs are joined together, forming a covalently closed, continuous loop that prevents degradation by RNA exonucleases, conferring it stability in the cell cytoplasm.3 Canonical pre-mRNA splicing is catalysed by the intracellular spliceosomal machinery to remove introns and to join the exons, resulting in the formation of linear RNA transcripts (Figs. 1A and 1B).3,4 By comparison, circRNAs are typically formed by a non-canonical splicing process known as backsplicing (Fig. 1C). They are derived from canonical splice sites, utilising their canonical splicing machinery. Looping of the long intron sequences leads to flanking of the downstream splice-donor site and the upstream splice-acceptor sites. The close proximity of these sites allows for spliceosomes to engage in backsplicing. This looping can be mediated by pairing of structures such as inverted repeat elements and dimerisation of RNA-binding proteins. Three different types of circRNAs can arise depending on their composition of exons and introns: exonic, intronic and exon-intron circRNAs (Fig. 1).5 Additionally, lariat formation during exon skipping or intronic lariats that escape debranching can also lead to the formation of exonic circRNAs and circular intronic RNAs (ciRNAs), respectively (Figs. 1A and 1B). Following production, most circRNAs, with the exception of intron-containing ones, are exported to the cytoplasm. 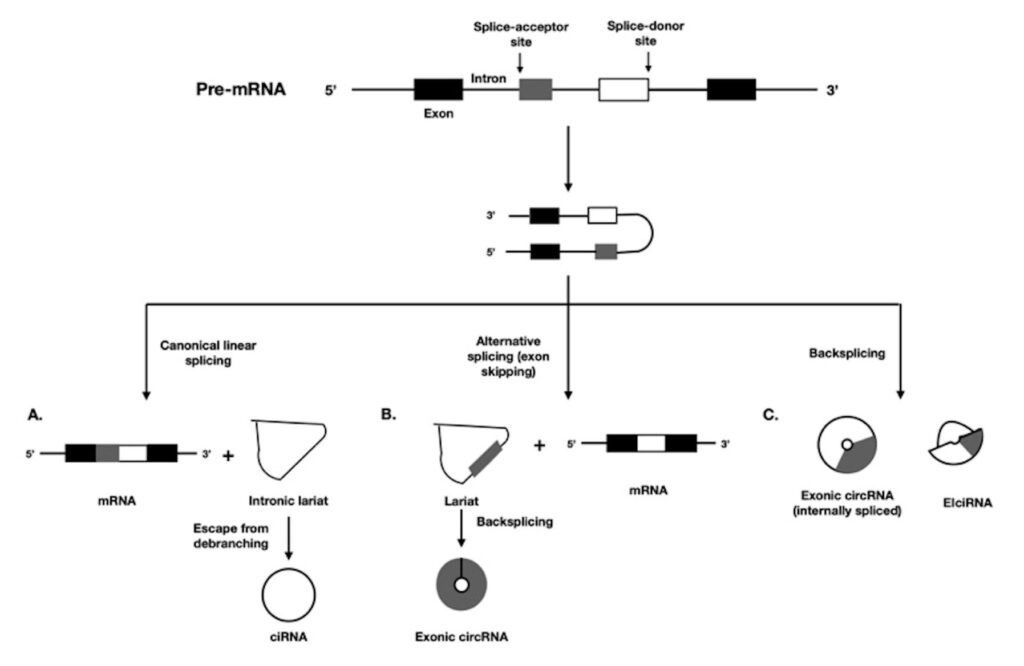 Fig. 1. Major proposed mechanisms in the biogenesis of circular RNAs. (A) Canonical linear splicing with the splicing of introns. (B) circRNAs are also formed from splicing intermediates such as lariat. (C) Long flanking introns, inverted repeat elements and RNA binding proteins favour backsplicing. These elements bring a downstream splice-donor site in close proximity to upstream splice-acceptor leading to backsplicing, resulting in formation of exonic circRNAs and exon-intron circRNAs (EIcircRNAs).

CircRNAs are known to regulate gene expression through several mechanisms, including regulation of transcription and splicing; miRNA sponges; mRNA traps; and translational and post-translational modification.6 Even so, most of the mechanisms of circRNA function in physiological and pathological conditions remain to be defined—a big part of our current understanding of their functions relates to their ability as miRNA sponges. miRNAs are a family of small non-coding RNAs that have been shown to regulate a wide variety of biological processes by regulating gene expression at the post-translational level.7 CircRNAs are thought to impair miRNA activity through sequestration, resulting in regulation of the miRNA target gene expression. Even so, only a limited number of circRNAs have since been identified and proposed as miRNA sponges to date, suggesting many other functions and capabilities of these molecules.5 CircRNAs have been proposed to interact with many different RNA binding proteins to act as protein sponges, enhance protein function, act as scaffolds and recruit specific proteins.3

The prospects of clinical application of circRNAs in the field of infectious diseases have been highlighted by recent studies on viral infections. Several studies have showed differentially expressed host circRNAs associated with infection by a multitude of viruses, including hepatitis B virus (HBV), human immunodeficiency virus (HIV) and herpes simplex virus (HSV).6 Analyses of interactions between circRNA, miRNA and mRNA have revealed different pathways that may be implicated in the progression of chronic viral infections such as HBV. These illustrate the potential role of circRNAs in regulating virus replication through modulation of antiviral immune responses.6,9 Of interest, proof-of-concept in vitro experiments utilising synthetic, engineered circRNAs were able to demonstrate inhibition of viral protein production in a hepatitis C virus cell culture system by sequestering miRNA-122, an important miRNA for the viral life cycle.10

In spite of these advancements, standardised protocols and workflows for the detection of circRNAs are still developing. Advancements are still needed to experimentally elucidate and verify the many functions of circRNAs. Detection of circRNAs exploits the presence of backspliced junctions as a key feature for identification of cirRNA. Many circRNA studies utilise RNase R treatment of samples to deplete all linear RNAs before sequencing. The rare cases of RNase R-resistant linear RNAs and RNase R-sensitive circRNAs are potential limitations of this strategy.11 Other studies are based on sequencing total, ribosomal-depleted or non-polyadenylated RNA, thus avoiding issues surrounding the usage of RNase R. However, with the presence of both linear and circRNAs, circularity confirmation of the circRNAs is required.3 The discovery of chimeric transcripts from the abundant circular DNAs further complicates these analyses as circRNAs are not the only transcripts with chimeric junctions.11 Further advances in sequencing technology, bioinformatics and better algorithms for circRNA detection are needed.

Recent advancement in our understanding of the biogenesis and functions of circRNA have emphasised the potential importance of these molecules in the pathophysiology of a multitude of complex human diseases such as sepsis. The specificity of circRNAs for certain diseases, their stability in human cells and their proposed regulatory functions have highlighted circRNAs’ potential as diagnostic and therapeutic targets in complex conditions such as sepsis and beyond. However, further progress in our knowledge is needed—through improvements in sequencing technology and bioinformatics for detecting and verifying circRNAs’ functions in human diseases—before this potential can be realised.