Vestibular hypofunction (VH) is the clinical condition where there is partial or complete loss of the vestibular organs and/or vestibular nerves. Symptoms of VH include vertigo, postural unsteadiness, and oscillopsia with head movements.1,2 These symptoms, if untreated, can affect an individual’s daily activities, occupational performance and mobility, leading to deconditioning and withdrawal from social activities.3 VH in the elderly is a major risk factor for falls and reduction of physical activity.4

Current VRT programmes involve patients being taught home exercises by trained therapists, with exercise performance feedback received only during follow-up sessions (average 4–6). Without timely feedback, patients who perform home exercises suboptimally may aggravate their symptoms and prematurely stop their exercise programme.5 Furthermore, patients rely on their therapists to progress further into their exercise programme during followup sessions, resulting in multiple and costly visits to the clinic.

Recent innovations have incorporated virtual reality via smartphone apps, used together with low-cost devices, to include gamifications aimed at improving visual and vestibular stimulation,9 and gaze stability and balance training in VRT.10 The level of difficulty of the games is determined at the clinicians’ discretion.10

VOR exercises involve patients moving their head horizontally or vertically, while focusing their eyes on a target, and keeping the target clear at all times at a prescribed rate and intensity. Patients need to slow down their head movement when the target becomes blurred or dizziness increases.

Users receive immediate on-screen feedback on their performance of the VOR exercises, which empowers self-progression according to the severity of their symptoms (Fig. 1). They will be informed to modify the speed of their head movement based on self-perceived dizziness severity rating. Other feedback includes keeping their eyes focused on the target, if not maintained consistently throughout the VOR exercises. 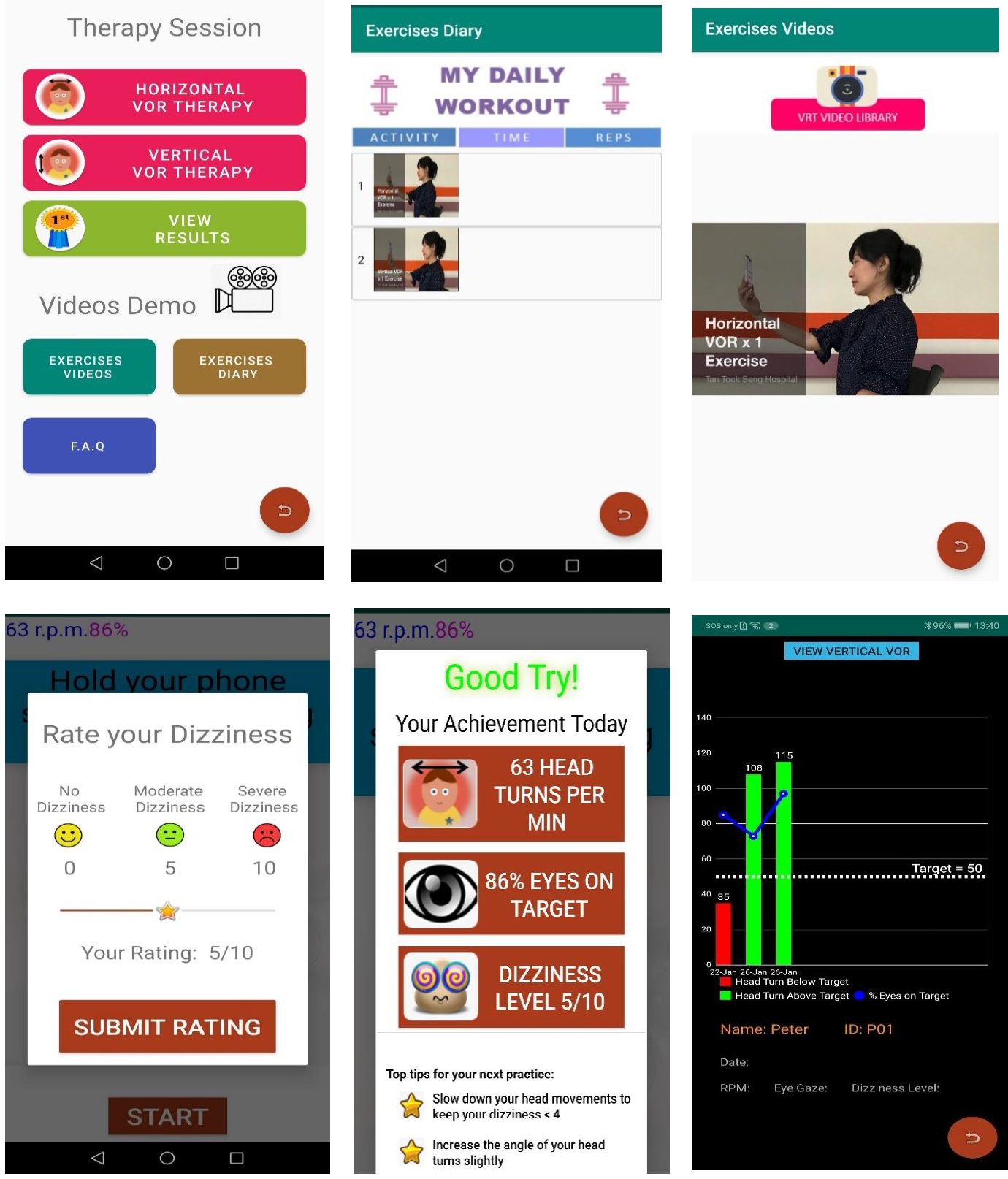 Cloud-based service can be incorporated to enable remote supervision and monitoring of individual compliance and performance of VOR by clinicians. The number of horizontal and vertical head movement per minute will be recorded per training session to track users’ performance. Dizziness intensity will be rated on a visual analogue scale of 1–10.

From 2012 to 2014, there was a 30% increase in smartphone internet usage among senior citizens aged 50–59 years, and a 19% increase among adults aged ≥60 years.10 Given senior citizens’ increasing familiarity with the use of smartphones in Singapore, the introduction of the mobile VRT for therapy in older adults is a timely idea.

We sought to test the experience and acceptance of older adults towards the mobile VRT, particularly given that these are unknown for apps that allow users to self-progress in VOR exercises.

Sixteen healthy older adults (mean age 57±7 years, 11 females) with no prior experience with vestibular rehabilitation consented to participate based on the National Healthcare Group Human Research Ethics Committee guidelines, to test and provide feedback on the mobile VRT. Subjects were taught to follow a series of exercise tasks over one 30-minute session, supervised by study team members before completing a questionnaire.

A 13-item questionnaire, with a combination of Likert scale and 1 open ended-question, was developed to evaluate users’ experience and feedback on the ease of use, clarity of instructions, and intuitiveness of progression between exercise intensity levels.

All recruited users found the mobile VRT easy to learn and navigate, and instructions and exercise videos simple to understand. All users also agreed that its use for rehabilitation is an innovative idea. A total of 93% reported confidence in using the app and would be keen to use it (Table 1).

Table 1. Questionnaire responses from the participants 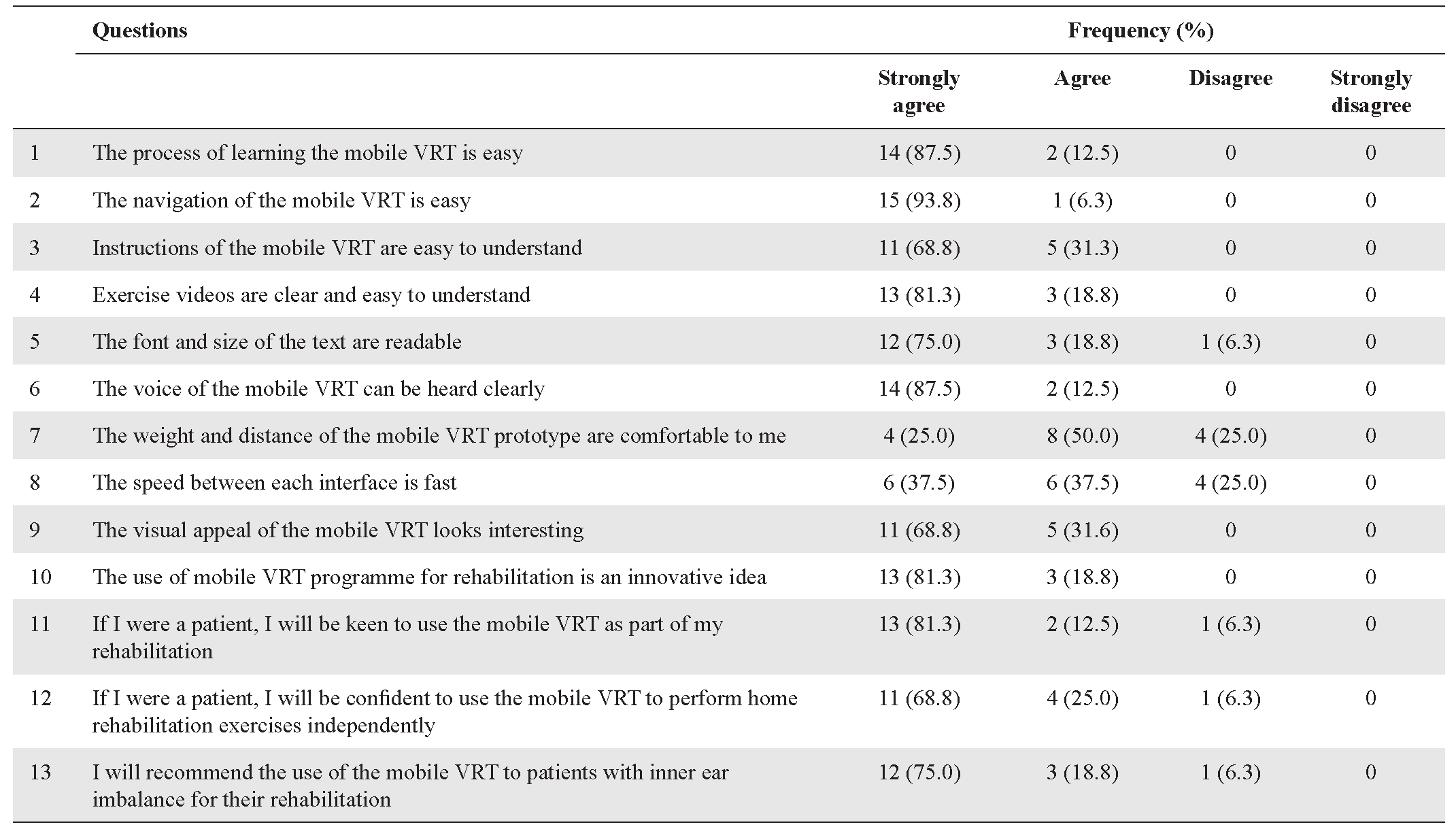 Further enhancements were proposed following thematic feedback analysis. These include: fine-tuning of vertical VOR, development of instruction videos and development of a troubleshooting guide during calibration process.

This study has preliminarily demonstrated the feasibility and usability of the mobile VRT in healthy older adults. Following further enhancements to the mobile VRT, the team plans to evaluate its potential for virtual reality gamifications to optimise VOR, visual and vestibular stimulation, and balance training in patients with VH.

Our study has some limitations. Only English-speaking older adults were recruited and currently, only the Android version of the app is available. Development of an iPhone-compatible version and in other languages would expand the usability of the mobile VRT.

Education and cognitive levels may be potential confounding variables in determining feasibility of the mobile VRT. Future feasibility studies may recruit users from different socioeconomic backgrounds, and age and ethnic groups to better represent the population in Singapore.

The mobile VRT was found to be easy to use, innovative and favourable by healthy older adults. Findings from this study will be considered for further development of the app.

Medicine and Surgery—History, Change and Challenge

Demands and Challenges of Modern Medicine

Radiology: Does It Have a Sell-by Date?

Medicine and Surgery—History, Change and Challenge

Demands and Challenges of Modern Medicine

Radiology: Does It Have a Sell-by Date?