Introduction: Identifying peripheral arterial disease (PAD) during diabetic foot screening (DFS) is crucial in reducing the risk of diabetic foot ulcerations and lower limb amputations. Screening assessments commonly used include absolute systolic toe pressure (ASTP) and toe-brachial index (TBI). There is a lack of research defining the threshold values of both assessment methods. We aimed to compare the accuracy of ASTP and TBI and establish optimal threshold values of ASTP and TBI with reference to the internationally accepted ankle-brachial pressure index (ABPI) screening test, for a multiethnic diabetic population in Singapore.

Diabetes mellitus is a global healthcare problem. In Singapore, the rising disease burden of this metabolic condition places considerable strain on the healthcare system, with healthcare costs for diabetes mellitus exceeding 1 billion Singapore dollars a year.1 An important complication of diabetes is lower limb loss. As diabetic foot ulcers (DFU) have been recognised as a major precursor to lower extremity amputation where almost 3 in 4 amputations were preceded by DFU,2,3 international guidelines have recommended regular foot assessments to identify and manage DFU risk.4-7

Diabetic foot screening (DFS) is performed in Singapore as part of routine diabetic foot assessment. The aim of this assessment is to identify risk factors leading to the development of DFU. This would allow healthcare professionals to intervene accordingly, manage and reduce the risks of DFU. A critical aspect of DFS is to establish if patients have peripheral arterial disease (PAD). Major international guidelines recommend the use of ankle-brachial pressure index (ABPI) at a cut-off value of ≤0.9 to diagnose PAD and stratify diabetic patients in routine foot assessments.6,8-10

In 2019, the Agency for Care Effectiveness, Ministry of Health Singapore, published “Appropriate Care Guide: Foot assessment in people with diabetes”.10 The document provides alignment and a standard at the national level for how DFS should be conducted. Apart from an ABPI≤0.9, the guide recommends the use of absolute systolic toe pressure (ASTP) to detect PAD during routine DFS. ASTP is a measure of microvascular perfusion and has been shown to have excellent inter-rater and intra-rater reliability.11,12 ASTP is also used to derive the toe-brachial index (TBI), which is another non-invasive vascular assessment tool for identifying PAD. The advantages of ASTP include requiring only a single reading parameter, as well as requiring less equipment and time to perform. In particular, the ASTP does not require the brachial systolic blood pressure to be taken, and as such can be performed quicker than the ABPI or TBI.

Although there is currently no consensus regarding the optimal threshold value of ASTP to detect PAD in routine DFS, published values range from 60mmHg10,13 to 97mmHg14 as indicative of PAD. An ASTP value of <60mmHg is recommended by the aforementioned guide to indicate PAD in routine DFS. The guide highlights that further research should be performed to determine a locally derived toe pressure value specifically for DFU risk stratification.10

A retrospective, observational study of DFS results from January 2017 to December 2017 was performed at Tan Tock Seng Hospital in Singapore. Ethics approval was obtained from the Domain Specific Review Board (NHG DSRB Reference 2021/00169) prior to study commencement. Data were extracted from consecutive medical records of patients attending their annual outpatient DFS appointments. The inclusion criteria were patients aged ≥21 years old who underwent regular DFS. Patients with incomplete records were excluded. Extracted data included demographic information such as age, sex, ethnicity, diabetes type and self-reported smoking status. Relevant DFS parameters such as the right brachial systolic blood pressure, left brachial systolic blood pressure, right dorsalis pedis systolic blood pressure, right posterior tibial systolic blood pressure and right ASTP were also collected. Only data from the right lower limb were used, to adhere to the assumption of independence of data in statistical analysis. The DFS conducted in the outpatient setting was standardised and performed in accordance to the Tan Tock Seng Hospital podiatry service clinical protocols. Assessments were performed by any 1 of 3 trained podiatry assistants, each with an average practice experience of 4 years.

The ASTP was measured using a standardised automated Doppler device (Smartdop 30EX PPG, Hadeco Inc, Kawasaki, Japan). Measurements were performed by positioning the appropriately sized toe cuff around the hallux and placing the photoplethysmograph probe directly on the apex of the hallux, affixed with an adhesive tape. The TBI was calculated as the ratio of the right ASTP to the higher of the right or left brachial systolic blood pressure.6

The demographic and clinical characteristics of patients were represented as mean and standard deviation for continuous variables and percentages for categorical variables. Normality of ABPI, ASTP and TBI were assessed using quantile-quantile (Q-Q) plots. To examine the diagnostic performance of ASTP and TBI against ABPI-determined PAD (ABPI≤0.9), receiver operating characteristic (ROC) analysis was conducted and area under the curve (AUC) was estimated for ASTP and TBI with 95% confidence interval (CI). The 2 AUCs were compared using DeLong’s test for 2 correlated ROC curves. The optimal threshold for ASTP and TBI for detecting ABPI-determined PAD were estimated using Youden’s index, and sensitivity and specificity of the threshold were reported with 95% CI. All statistical analyses were performed using R (R Core Team 2021, R Foundation for Statistical Computing, Austria) and pROC package was used for ROC analysis.18 Statistical significance was fixed at two-sided 5% level for all tests. No a priori sample size calculation was done given the retrospective nature of this study. A post hoc power calculation revealed that our study had a minimum of 80% power to detect the difference between 2 estimated AUCs at two-sided 5% significance level. In general, an AUC of more than 0.9 is considered outstanding, 0.8–0.9 excellent, 0.7–0.8 acceptable and 0.5 suggests no discrimination.19 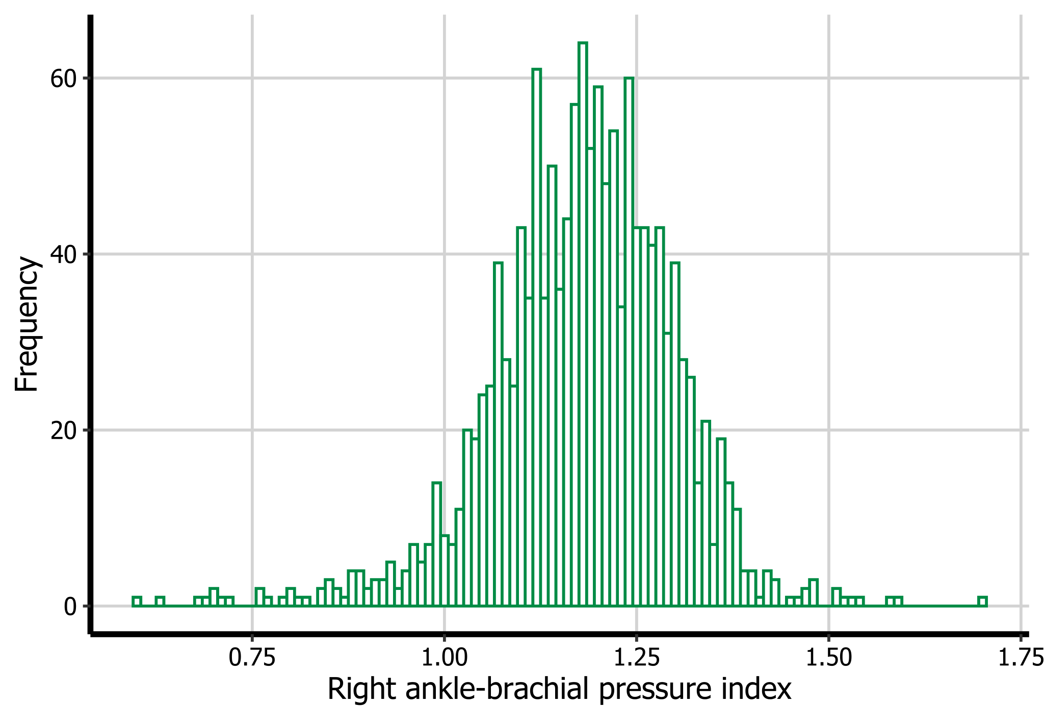 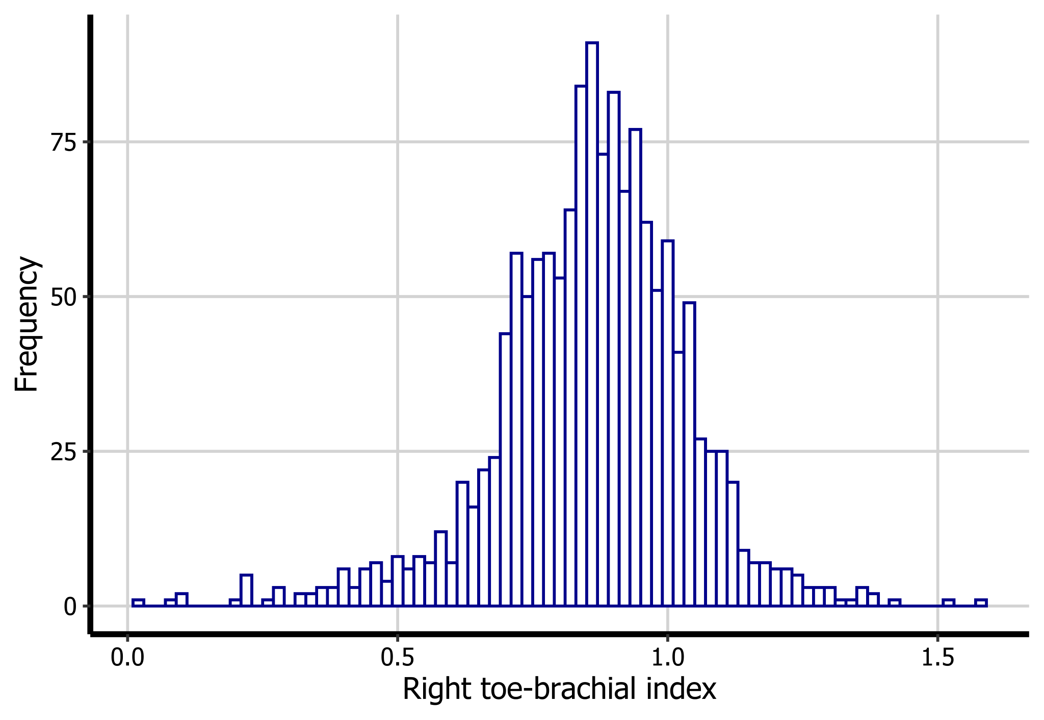 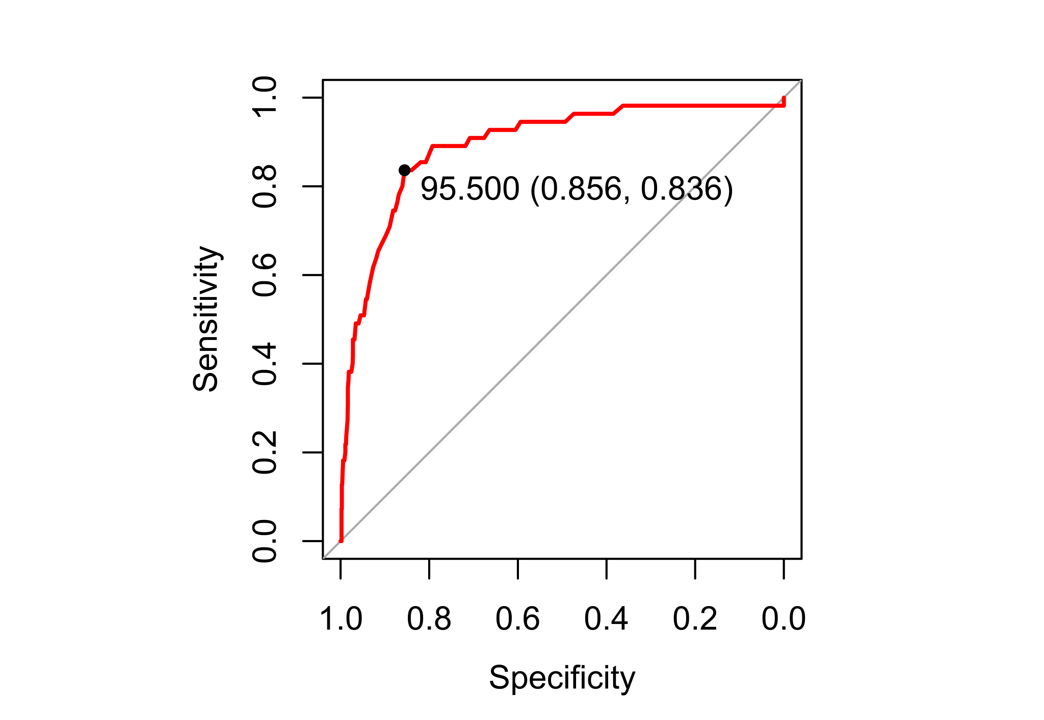 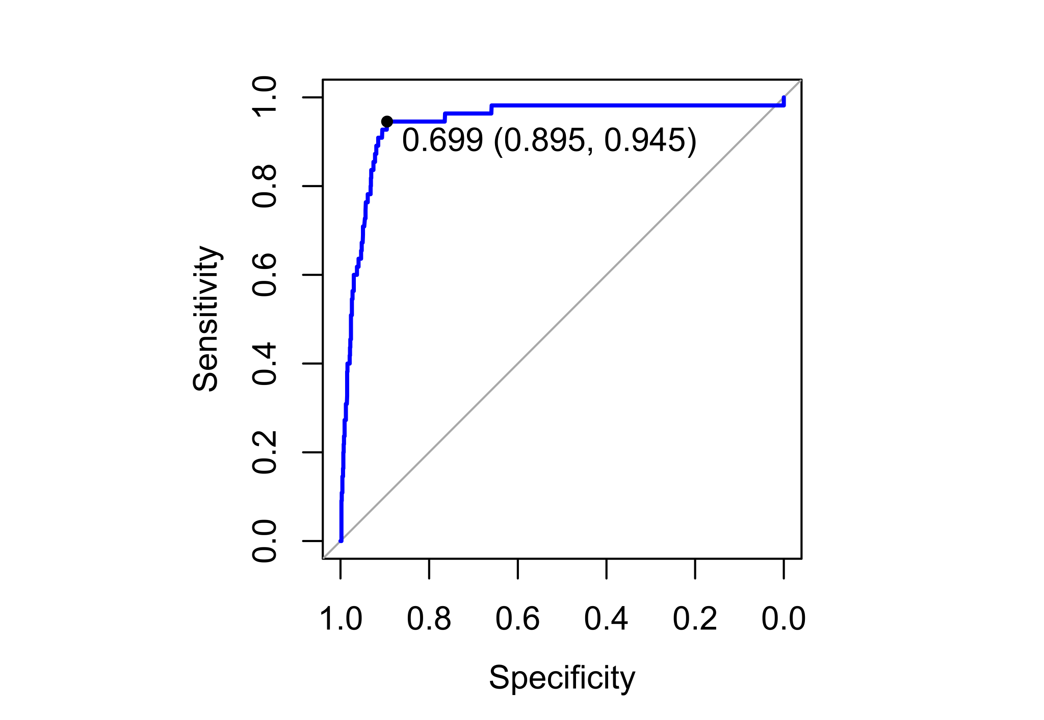 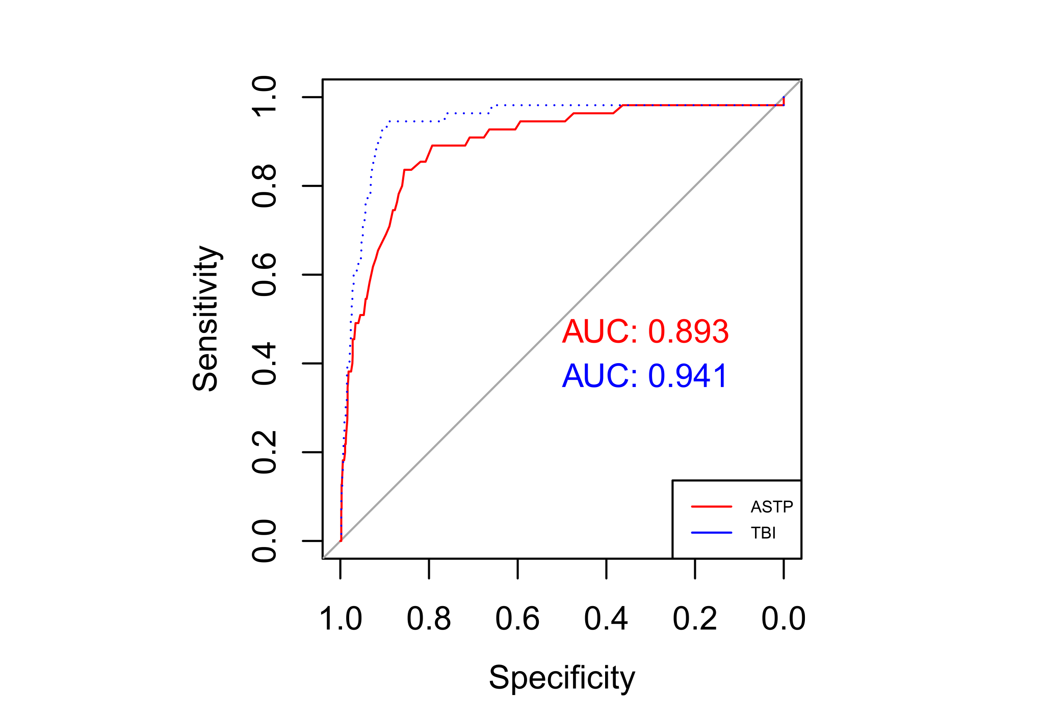 ASTP and TBI yielded AUCs in the excellent and outstanding categories of 0.8–0.9 and >0.9, respectively. These results supported the use of ASTP or TBI as alternative measurements to ABPI≤0.9 to indicate PAD for risk stratification in routine DFS in Singapore. Although the difference in AUCs between ASTP and TBI was statistically significant in favour of TBI, ASTP could be considered for implementation in screening services due to its excellent AUC value and single parameter measurement characteristic. ASTP is easier to perform and time-saving as brachial systolic blood pressure measurement is not needed when compared to TBI. Time constraints have been reported to be a major deterrent to performing vascular assessments in practice.20,21 In Singapore where the prevalence of diabetes is one of the highest in the world,1 an accurate, time-saving and efficient measurement is needed to allow screening for ABPI-determined PAD during DFS that can also be performed on a large scale.

The indicative threshold value of TBI at 0.7 (specificity 0.89, sensitivity 0.95) for detecting an ABPI≤0.9 is in agreement with some of the internationally reported threshold values and guideline recommendations of TBI<0.7 to be indicative of PAD.16 Our results provided further evidence to support TBI<0.7 as the optimal threshold in indicating ABPI-determined PAD in routine DFS in a multiethnic diabetic population such as Singapore.

The derived indicative threshold value of ASTP at 95.5mmHg (specificity 0.86, sensitivity 0.84) for indicating ABPI≤0.9 is about 50% higher than the current recommended value of 60mmHg.10 The current threshold of ASTP<60mmHg may be under-diagnosing many patients who may benefit from earlier detection and intervention during routine DFS. As the results of this study are consistent with previously reported threshold values of 97mmHg to be indicative of PAD,14 the current recommendation of ASTP<60mmHg for indicating ABPI-determined PAD in DFS in Singapore needs to be reconsidered as more data and evidence become available.

One limitation of our study was the potential for measurement errors as only single readings were performed for each parameter. To minimise this, all readings were performed by 3 trained podiatry assistants. The accuracy of ABPI was another limitation. Although ABPI≤0.9 is considered the accepted standard in assessing PAD in routine DFS, limitations have been reported regarding its reduced accuracy in the presence of medial arterial calcification. However, ABPI is still the de facto standard recommended by international guidelines and is commonly used worldwide for routine DFS. Future studies may consider investigating how ABPI, TBI and ASTP compare with each other using colour duplex sonography as the reference test to overcome the limitation of ABPI. ROC analysis may be used to further investigate the optimal threshold value for indicating PAD for ABPI, TBI and ASTP, with colour duplex sonography as the reference standard, in a multiethnic diabetic population in Singapore.

Our study showed that ASTP or TBI may be used to detect ABPI-determined PAD in DFS. The optimal threshold values derived from a multiethnic Asian diabetic population were <0.7 for TBI and <95.5mmHg for ASTP. ASTP is an effective and efficient single measurement modality that may be used as an alternative to the well-established ABPI in DFS.

Periodontal disease and systemic health: An update for medical practitioners

Diagnosis and management of polycystic ovary syndrome: Perspectives of clinicians in Singapore

Periodontal disease and systemic health: An update for medical practitioners

Diagnosis and management of polycystic ovary syndrome: Perspectives of clinicians in Singapore