Methods: This is a retrospective cohort study of 132 patients who received ECT from July 2017 to December 2019. Sociodemographic and clinical characteristics were obtained from medical records. Changes in QoL, psychiatric symptoms and cognition function were examined after 6 sessions of ECT. Generalised linear regression was used to examine the associations of Brief Psychiatric Rating Scale (BPRS) scores and Montreal Cognitive Assessment (MoCA) scores with QoL as measured by EQ-5D scores.

Schizophrenia is a severe mental disorder with a profound impact on patients, their families, caregivers and society. The global prevalence of lifetime schizophrenia is 0.2–0.4% without significant differences between sex and ethnicity, nor between urban and rural environments.1 The health and economic burden of schizophrenia is significant, given the resources required to provide services to patients and the indirect costs of productivity loss from patients and their caregivers.2 Current long-term treatment strategies remain suboptimal for patients with schizophrenia. A subgroup of patients does not respond satisfactorily to existing treatment modalities and experiences symptom relapses over a prolonged period of their life.3 Therefore, the goal of clinicians and healthcare workers has increasingly shifted over time from focusing on the psychiatric symptoms of schizophrenia alone towards functional improvement and quality of life (QoL).4

Electroconvulsive therapy (ECT) is arguably ranked the first among many effective biological methods of treatment for schizophrenia with a potential of augmenting treatment response from antipsychotics.14 Even in patients resistant to the gold standard of antipsychotic treatment (clozapine), ECT augmentation can result in up to 50% response rate in both clinical trial and real-world settings. Additionally, there have been reports of cognitive side effects induced by ECT among patients with schizophrenia,15,16 while some studies have demonstrated cognitive improvement.17,18 Despite the large amount of research into symptomatic and cognitive effects of ECT and ECT-associated improvement of QoL among patients with depression,19-21 the impact of ECT on QoL among patients with schizophrenia remains largely unexplored. In 3 studies with small samples (n=46, 30 and 15, respectively),22-24 participants reported an improvement of overall and subdomain QoL scores as assessed by the Quality of Life Scale (QLS);22 World Health Organization Quality of Life Scale (WHO QOL) Scale23 immediately after acute ECT; or a 36-item short form survey (SF-36) at 3 or 6 months after acute ECT.24 However, the question of whether these improvements were associated with symptomatic and/or cognitive changes with ECT remained unclear.

The present study aimed to examine the changes in QoL with an acute course of ECT treatment, and the potential associations with changes in psychiatric symptoms and cognition in patients with schizophrenia. We hypothesised that both symptom and cognitive improvements are associated with QoL improvement.

This was a retrospective cohort study where medical records of all patients who received ECT at our institution from July 2017 to December 2019 were included. The subgroup of patients with a diagnosis of schizophrenia or schizophrenic spectrum disorder, and with completed Montreal Cognitive Assessment (MoCA) tests before and after 6 ECT sessions, was then selected for analysis. Patients’ sociodemographic and clinical characteristics, including ECT information and outcome assessment were collected. Ethical approval to conduct the study was obtained from the National Healthcare Group Domain Specific Review Board (2015/01283) with a waiver of consent for use of the registry data. Patients were referred for ECT by psychiatrists who had made clinical diagnoses based on the Diagnostic and Statistical Manual of Mental Disorders, Fourth/Fifth Edition (DSM-IV/DSM-5), or International Statistical Classification of Diseases, 10th Revision (ICD-10) criteria. ECT was administered 2–3 times a week using a single Thymatron System IV (Somatic Systems Institute, Northhampton, US). The ECT treatment algorithm used bifrontal ECT with 1.0ms pulse width as the initial treatment modality, followed by bitemporal with 0.5ms pulse width. Right unilateral ultra-brief (0.3ms) ECT was occasionally selected for patients to reduce cognitive side effects. All patients received individual, empirically-derived seizure titration dosing for ECT and all ECTs were delivered at 1.5 times the seizure threshold.

Anaesthesia-ECT time interval, propofol dosage, succinylcholine dosage, ECT dosage and electroencephalogram (EEG) postictal suppression (PIS) score were averaged across ECT sessions 2–6 (treatment 1 was a seizure threshold titration session). PIS score was chosen as it was a quick, reliable and valid way for ECT practitioners to rate the quality of seizures in a busy clinical service as part of the Clinical Alliance and Research in Electroconvulsive (CARE) network.25,26 We used the Brief Psychiatric Rating Scale (BPRS) to assess changes in psychiatric symptoms. The BPRS is a Likert scale ranging from 1–7 for each item (question) where a clinician or researcher may measure psychiatric symptoms such as depression, anxiety, hallucination, psychosis and unusual behaviour. A lower BPRS score indicates a better mental condition. We used MoCA to assess cognitive functioning in the language that patients were most comfortable with (English, Chinese, Malay or Tamil). The MoCA is a cognitive screening test designed to assist healthcare professionals in detecting mild cognitive impairment, with a lower score indicating worse cognitive function. Patients also reported their QoL using EuroQol-5-Dimension (EQ-5D)-3L, the 3-level version of the EQ-5D questionnaire. EQ-5D contains 5 subdomains including mobility, self-care, usual activity, pain, and anxiety ranging from 1–3 levels, with lower scores indicating better conditions. EQ-5D utility score was calculated according to a formular provided by Luo et al. that reflects the Singapore population norms of QoL.27 For both EQ-5D utility score and a visual analogue scale (VAS) score, a lower score indicated worse QoL. All assessment scales including BPRS, MoCA and EQ-5D were administered with patients 1–2 days pre-ECT and 1–2 days after the 6th ECT session.

Quality of life and clinical outcomes 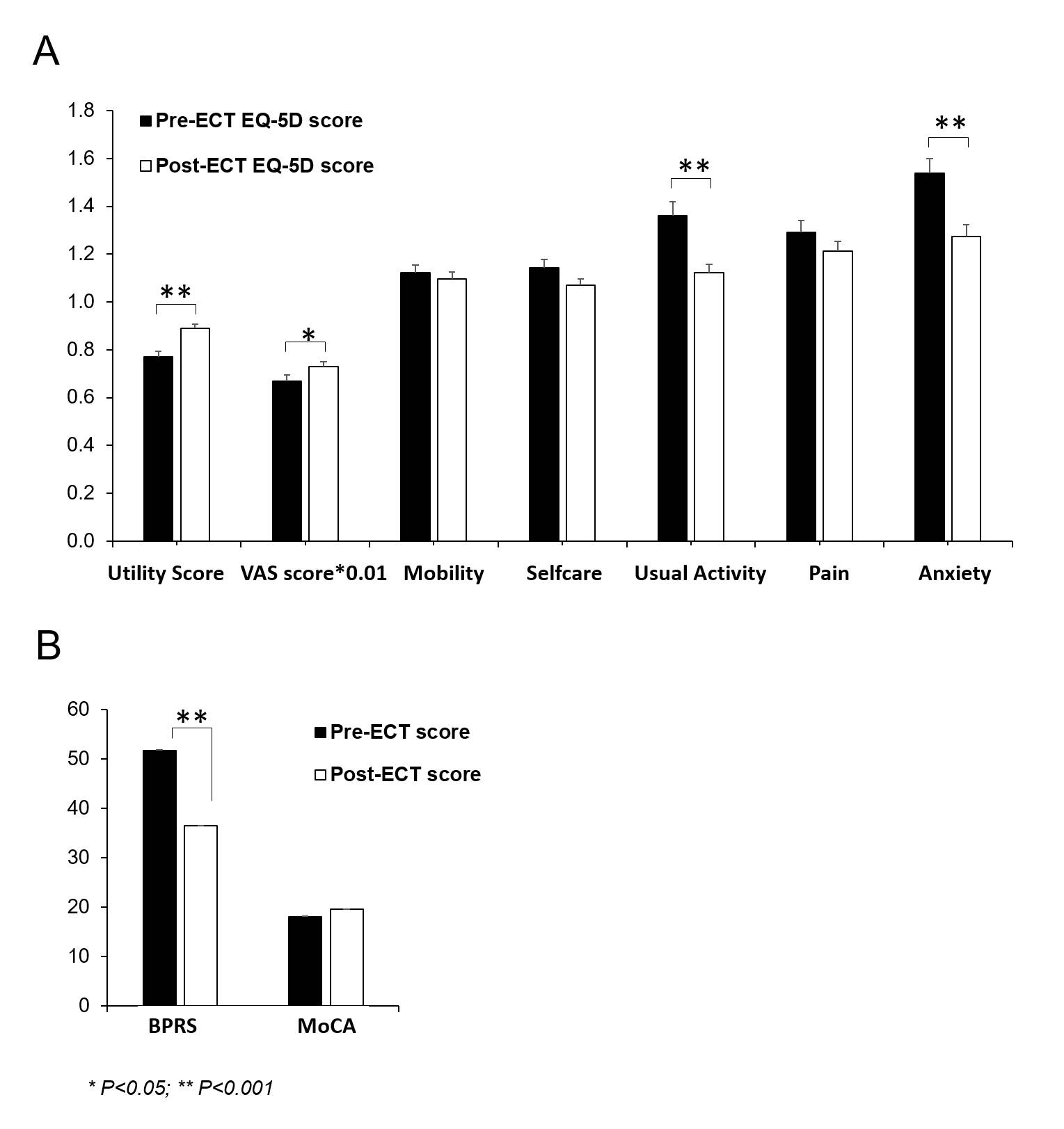 While evidence remains scarce regarding the QoL effect of ECT in patients with schizophrenia, our data demonstrated an improvement of QoL as assessed by EQ-5D after 6 sessions of ECT. This is in agreement with 1 of the few papers documenting quick improvement in QoL of patients with schizophrenia when treated by ECT.23 As our patients were mostly severely ill patients who were typically referred for ECT due to treatment resistance to several courses of pharmacotherapy (65.2% with previous relapse episodes and 91.7% resistant to antipsychotics) and were in need of a rapid relief of symptoms, ECT has the potential to be a rapid acting treatment option if it can be efficiently delivered to patients to improve QoL quickly.

In our study population, improvement of BPRS and MoCA scores were significantly associated with an improvement of overall utility score, but this was not the case for VAS score. A possible reason for the discrepancy is that utility score is a validated composite score calculated from EQ-5D subdomain scores and normalised to a local population’s general perception of QoL, whereas VAS score is a subject self-reported score. Evidence has shown that factors such as political structure, social culture and economic conditions may affect the utility values of EQ-5D health states,28,29 so an evaluation on the same health problems varied for different countries/social status. For example, affective mood problems such as anxiety/depression had different effects on people from countries with different economic levels.30 Therefore, utility scores could more accurately and objectively reflect the overall improvement of QoL among a population induced by ECT, while the VAS score is more self-biased due to a lack of insight into other patients with schizophrenia. In a comparison study of self-reported QoL among patients with schizophrenia with objective QoL assessed by their primary clinicians, it was found that there was moderate agreement on symptoms and function, less agreement on physical health, and little to no agreement on social relations and occupational aspects of QoL.31 In our early study of QoL among patients with mental disorders, we recognised that patients with psychosis lacked self-awareness of their illness and social environment. Consequently, they may develop self-protective strategies and assign meanings to their lives, leading to reporting of better subjective QoL than patients with depression. Thus, although patients with schizophrenia reported a general improvement of both the utility score and VAS score after ECT, VAS may not be a valid measurement of QoL change in the current population.

In addition, we found that ECT-associated symptomatic and cognitive improvement had no association with EQ-5D mobility function. One possibility is that ECT had a limited effect on mobility. There was a statistically non-significant improvement of mobility function after 6 sessions of ECT. Another possible explanation is the insensitivity of the 3-level EQ-5D-3L to assess changes in mobility function. The insensitivity of EQ-5D-3L subdomain assessments may also partially explain the observed relatively small effect size and model-fit testing value in the regression analysis for both BPRS score and MoCA change to predict EQ-5D change. Indeed, the 5-level EQ-5D-5L was recently introduced by the EuroQol Group to improve the instrument’s sensitivity and to reduce ceiling effects.33 However, EQ-5D-5L has not been validated in Singapore.

To date, the number of studies that investigated predictors of ECT efficacy in patients with schizophrenia is limited. The influence of common sociodemographics including age and sex on efficacy of ECT remains unclear. Stenmark et al. reported that no studies have found age to be a predictor of treatment response to ECT in patients with schizophrenia.38 ECT was reported to be significantly more effective in female patients than in male patients suffering from schizophrenia,39 although contrary evidence exists that sex does not influence the ECT dose required to achieve a response among a group of patients with schizophrenia.40 In our study, we did not find a correlation of age and sex with ECT-induced changes of QoL. The relevance of this finding is as yet unclear. Individual variations in ECT parameters may limit generalisability of our results.

There were several limitations in our study. Our assessment data were from after a short course of ECT without further follow-up treatments. Patients may benefit more from a longer course of ECT. The longer-term impact of ECT on QoL and the long-term associations between symptomatic/cognition function and subjective QoL remain unclear, although evidence currently exists on the diminished benefit of ECT on patients’ subjective QoL after 1 year of treatment.22 Further interventions, such as maintenance ECT or other ECT augmentation to improve symptoms and cognition function could probably help to maintain QoL improvements. Additionally, other subjective or objective QoL instruments, which have a better sensitivity and clearer differential assessment of patients’ mental health and physical health, may be needed to replicate our results. Finally, similar to other retrospective studies with medical records, we cannot rule out the confounding effects of other important factors that were not included in our analysis model, such as the education background of participants and the dosage of medications patients were prescribed.

In summary, ECT induced an overall and quick improvement of QoL among patients with schizophrenia. The improvement of psychiatric symptoms was found to be significantly associated with better mental health while the improvement of cognitive function was associated with better physical health. Several issues remain a concern including the utilisation of a subjective EQ-5D VAS to assess treatment outcomes and the sensitivity of EQ-5D subdomain scales. To the best of our knowledge, this is the first study in the literature to examine association of ECT-induced symptomatic improvement and cognitive function with QoL among patients with schizophrenia. Our pilot study warrants a future prospective and blinded trial to validate current observations to gather valuable information for identifying patient-reported needs for ECT and the benefits of ECT.

Bridging electroconvulsive therapy in schizophrenia with cognition and quality of life

Perception of disease, well-being and financial burden by patients with chronic hepatitis B: A self-reported assessment

Psychosocial impact and treatment trends of hidradenitis suppurativa in Singapore

Bridging electroconvulsive therapy in schizophrenia with cognition and quality of life

Perception of disease, well-being and financial burden by patients with chronic hepatitis B: A self-reported assessment

Psychosocial impact and treatment trends of hidradenitis suppurativa in Singapore