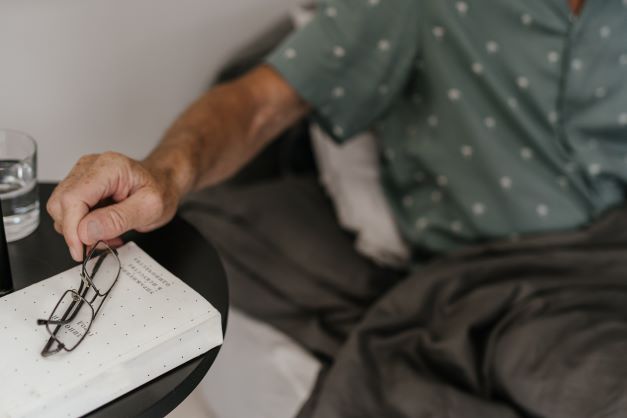 Post-anaesthesia care unit (PACU) delirium is defined as a disorder in thought processes that affect cognition in terms of memory, comprehension and attention.1 It has a strong association with postoperative delirium, which is present in up to 45% of patients after surgery.2-5 PACU is a wide-reaching problem, and especially prevalent in elderly patients. Postoperative delirium directly affects clinical outcomes such as hospital length of stay and increased 30-day mortality.6 Up to 10% of these patients may develop long-term neurocognitive deficits with diminished quality of life, and pose a tremendous socioeconomic burden on family and caregivers.7,8

Despite its importance, PACU delirium remains underdiagnosed in the perioperative setting. The lack of awareness and established biomarkers could potentially contribute to increased morbidity and mortality in these vulnerable patients. Despite many screening and assessment tools3 being readily available, few hospitals have institutionalised monitoring protocols. One such scoring tool is the Nursing Delirium Screening Scale (Nu-DESC). It is a nurse-led, validated, quick and easy screening tool that can be performed within 2 minutes. It has a sensitivity and specificity of 98% and 92%, respectively, in postoperative patients with a score of ≥2 being indicative of delirium.3

With an increasingly ageing population requiring surgery, the problem of PACU delirium is set to increase. It is crucial to understand the risk factors and contributors to PACU delirium so that strategies to reduce it can be adopted. In line with this new focus, several guidelines have been promulgated to address this issue, including the Brain Health Initiative9 and the Safe Brain Initiative.10 Previous pilot study in our local population has found that the incidence of PACU delirium is up to 6.2% in the elderly population,11 while other studies found up to 25% prevalence of PACU delirium.12 Despite the high prevalence rate, our lack of understanding of the risk factors that predispose patients to PACU delirium makes it difficult for the formulation of an evidence-based guideline for prevention of delirium. The recent American Society for Enhanced Recovery and Perioperative Quality Initiative Joint Consensus Statement on Postoperative Delirium Prevention13 has recommendations that are mainly based on study in Caucasian population, and PACU delirium in Asian population has not been well studied.

Thus, we aimed to do a pragmatic observational study using Nu-DESC to understand the incidence of PACU delirium in patients aged 65 years and older after major non-cardiac surgery in Singapore and determine its associated risk factors.

Patients aged 65 and above presenting for non-cardiac surgery that was expected to last longer than 2 hours were recruited in the anaesthetic preoperative consultation clinic. Exclusions included patients undergoing neurosurgical procedures and those undergoing surgery performed under local anaesthesia. The patients who fulfilled these criteria were invited to participate in a series of questionnaires involving screening for cognitive impairment with Montreal cognitive assessment (MoCA) score,14 depression with Patient Health Questionnaire-9 (PHQ-9) score,15 frailty with Frailty Index for Elders (FIFE)16 and nutritional screening.17 Other demographic data and perioperative parameters were collected. The research assistants administering the questionnaires were trained and certified for MoCA. All blood test results collected were based on the preoperative requirements for each patient based on individual surgical and anaesthesiologist’s decisions. Each hospital was targeted to recruit 30 patients and the target for the study was to recruit 120 patients. No additional blood tests were taken for the purpose of the study.

Intraoperative details such as surgical discipline, type of anaesthesia and duration of surgery were collected. The type of surgery was classified as low, intermediate, or high risk based on the European Society of Cardiology and European Society of Anaesthesiology non-cardiac surgery risk score.18 Postoperative hypotension was defined as having a systolic blood pressure of below 90mmHg for more than 5 minutes.

Postoperatively, patients were assessed for PACU delirium at 30–60 minutes upon arrival in PACU using Nu-DESC. Nu-DESC evaluates delirium based on observation of the following 5 features: (1) disorientation, (2) inappropriate behaviour, (3) inappropriate communication, (4) illusions/hallucinations and (5) psychomotor retardation. Each item was scored based on its severity from 0 to 2. A score of ≥2 was classified as a positive score for PACU delirium.3 Other postoperative variables such as postoperative hypotension (systolic blood pressure of below 90mmHg for more than 5 minutes.), hypothermia (core temperature <35oC Celsius), desaturations (<92% requiring supplemental oxygen), postoperative nausea and vomiting, highest pain score and aggressive behaviours were collected during the PACU stay.

A follow-up phone call was conducted on postoperative day 30 to assess outcomes of the patient, including falls at home and unplanned hospital readmission. Questionnaire on 10-signs of delirium was conducted in the same setting over the phone. Data on hospital length of stay and cost of hospitalisation were also obtained for analysis.

Sample size calculation was not done for this study. All data were entered into a statistical software program, with analysis, statistical computing and visualisations carried out with SPSS Statistics software for Windows, Version 25.0 (IBM Corp, Armonk, US) and R environment version 1.2.1335 (The R Foundation for Statistical Computing, Vienna, Austria). For continuous variables, mean and standard deviation (SD) were presented, and the student t-test was used to test the mean differences between the groups. For categorical variables, the chi-square test was used to compare the proportions between the groups. Risk factors with a P value of <0.10 were fitted into a multivariate logistic regression model to determine the independent predictors for PACU delirium. The effect size was reported as an odds ratio (OR) and its 95% confidence interval (CI). To prevent multicollinearity, all factors included in the multivariable analysis were run through variance inflation factors (VIF) and were only included if VIF was <5.

In an exploratory analysis attempt to find the optimum preoperative capillary blood glucose cut-offs, Youden’s index was identified (highest value of specificity + sensitivity – 1). The detailed analysis can be found in the Supplementary Materials (Appendix in the online version of this article).

A total of 122 patients were recruited. Twenty-four were excluded from the study due to voluntary withdrawal (n=3), cancelled operations (n=6), the operation being less than 2 hours (n=8), patients going to intensive care unit postoperatively (n=2) and patients who could not be followed up due to COVID-19 restrictions at the time of data collection (n=5). Fig. 1 shows the Consolidated Standards of Reporting Trials (CONSORT) diagram. 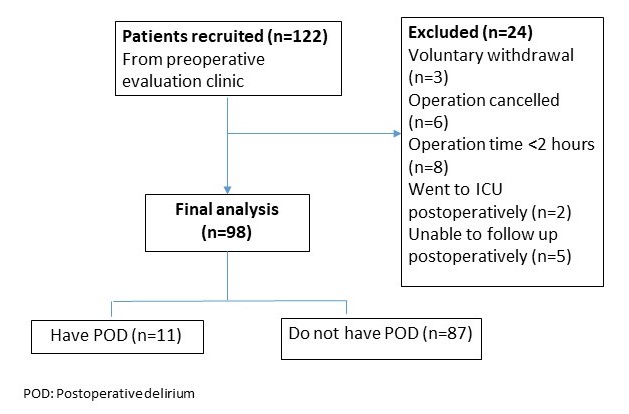 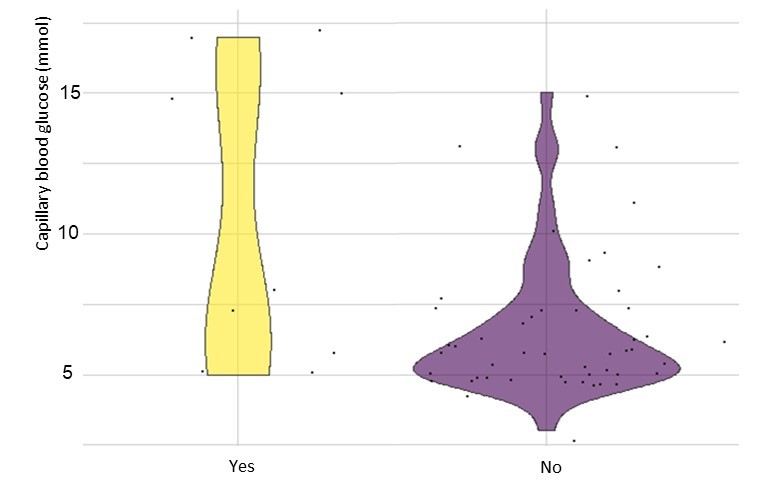 The method of anaesthesia did not make a difference to rates of PACU delirium (P=0.516), but surgeries that are deemed to be high risks contributed to PACU delirium (36.4% vs 3.4%). The use of different anaesthetic medications such as opioids, midazolam, neuromuscular blockers, ketamine, dexmedetomidine and propofol did not contribute to a difference in PACU delirium risk. The duration of time where bispectral index (BIS) was <30 was not a risk factor for PACU delirium.

The incidence of PACU delirium in the elderly surgical population of Singapore at 11.2% was lower compared to those found in other studies.12

A variety of factors were examined in this study, including preoperative risk screening for dementia and depression. Although it has been postulated that preoperative dementia is a risk factor for PACU delirium, the MoCA cognitive screening test14 did not generate any significant association with PACU delirium. This is congruent with findings in Austin et al.,19 where preoperative cognitive impairment was not associated with postoperative delirium when delirium was measured within 24–72 hours after surgery. The hypothesis that postoperative delirium may worsen preexisting cognitive decline20 is also not supported by data from our study.

While the MoCA score did not show any association with PACU delirium, moderate to severe depression could have a potential relationship. Studies screening for postoperative delirium geriatrics depression scale found that even different components of depression are differentially predictive of PACU delirium, for instance, behavioural inactivity.21 The identification and optimisation of elderly patients at risk of these behaviours may reduce the risk of PACU delirium.

The incidence of PACU delirium was not found to be different with the various anaesthesia techniques performed. Similarly, the latest American Society for Enhanced Recovery and Perioperative Quality Initiative Joint Consensus Statement on Postoperative Delirium Prevention has stated that there is no current evidence to suggest that the use of different anaesthetic agents or techniques such as central neuraxial blockade would reduce PACU delirium.13 Concurring with the findings in the Electroencephalography Guidance of Anesthesia to Alleviate Geriatric Syndromes (ENGAGES) trial, the amount of time where bis values were between 30 and 40 intraoperatively was not associated with increased incidence of PACU delirium22 (Table 2).

While there are a few modifiable risk factors that have been associated with PACU delirium, preoperative glucose control has emerged as one potential area for optimisation. Preoperative HbA1C and random blood glucose were associated with PACU delirium in our study. Lin et al. similarly found that high glycaemic variability increases the risk of PACU delirium in acute aortic dissection patients,23 while Heymann et al. also found that patients with hyperactive delirium had higher mean blood glucose than the non-hyperactive delirium patients.24

As a simple carbohydrate, the effect of glucose on the body is significant. Neurons are especially sensitive to glucose levels as they use glucose as a primary source of energy.25 Hyperglycaemia has been postulated to cause oxidative stress and neuronal damage, which may explain the association found in this study.

However, overzealous correction and tight control of perioperative blood glucose may be detrimental in vulnerable geriatric patients. Keulen et al. demonstrated that hypoglycaemia is also associated with increased delirium incidence.26

Exploratory analysis showed that preoperative random glucose of >9.5mmol/L may be associated with increased risk of PACU delirium, with a specificity of 0.90 and sensitivity of 0.40. This could potentially provide a target during preoperative optimisation in elective surgery. There is hence a window of opportunity for anaesthesiologists to participate in the reduction of PACU delirium.

Patients with PACU delirium are associated with a significant increase in length of stay in hospital postoperatively in elective surgical patients (P=0.049) with a median of 8 days vs 4 days. The increase in length of stay also resulted in a trend towards higher hospitalisation cost of approximately SGD10,000 (P=0.051, SGD28,124±11,633 vs SGD18,251±11,677). This, however, should be interpreted in the context that patients with delirium were more likely to be elderly and of higher ASA status.

In our study population, only 31 (31.6%) patients had preoperative HbA1C taken, and 58 patients had random blood glucose (59.2%). This is due to different institutional protocols across the 4 hospitals and thresholds to perform preoperative glucose control monitoring. The study is therefore limited by missing data. It highlights, however, the importance of having routine perioperative glucose monitoring for vulnerable patients. This was set up to be a pilot study and sample size calculation was not done. We cannot exclude a type 2 error for potential predictors of PACU delirium.

The project is sponsored in part by Medtronic APAC under its External Research Program. Consumables such as bispectral index (BIS) monitor strips were provided for patients to facilitate the collection of intraoperative BIS data, and a total of SGD2,000 was supported for patient reimbursement.

We would like to extend our gratitude to the nurses and clinical research associates at various hospitals who had helped with data collection and acquisition.