An 84-year-old Chinese man with stage IV non-small cell lung cancer was initiated on pembrolizumab, an anti-programmed cell death (PD)-1 monoclonal antibody, 4 times per week. Seven weeks later, on the day of his third cycle, he developed a rash on his chest and right axilla, which subsequently resolved with 1% hydrocortisone cream, and there was no interruption to his immunotherapy. Eleven weeks after the initiation of pembrolizumab, the patient reported new pruritic, purpuric papules on his buttocks, forearms and legs. There were associated blisters seen on his feet. The rash progressively worsened despite topical steroids (Fig. 1).

Fig 1. Violaceous plaques and flat-topped papules on both legs. 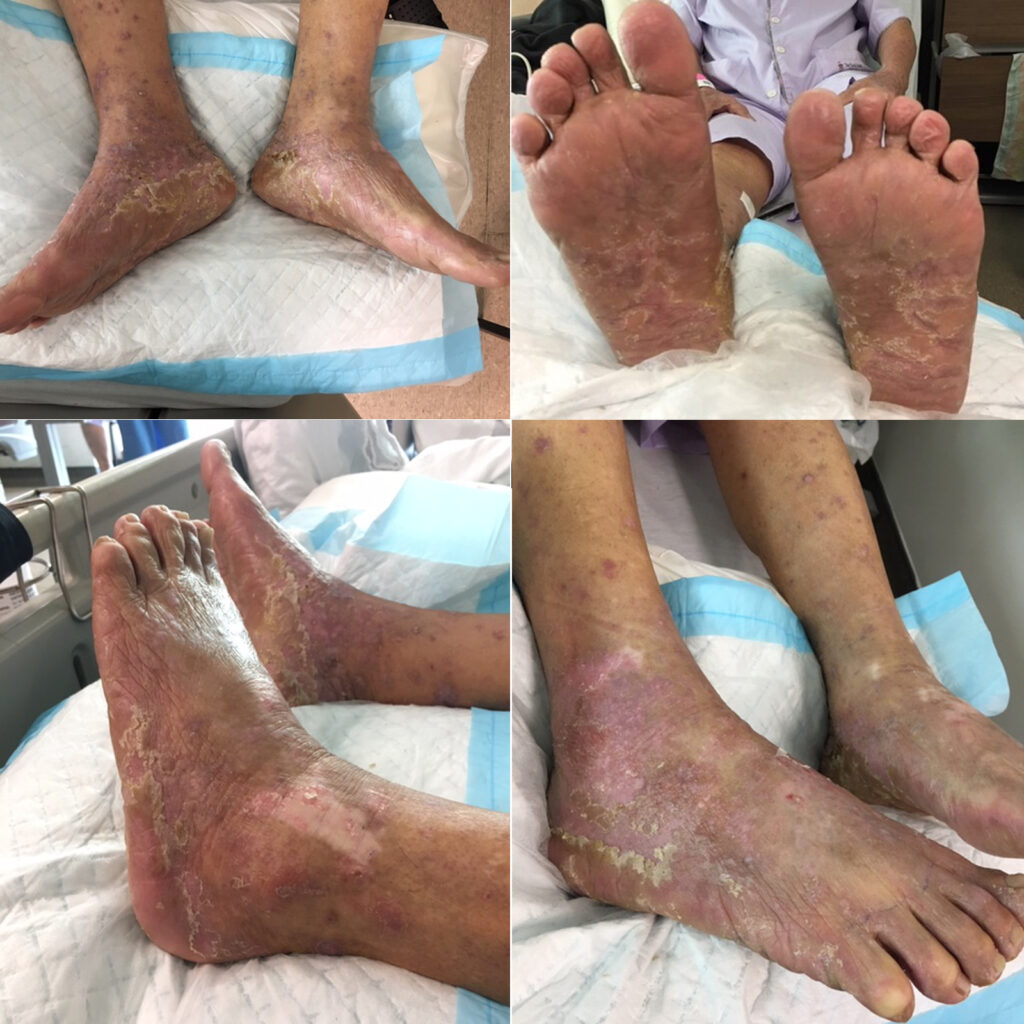 A skin biopsy was performed on his right shin. Histologically, basal vacuolar alteration with a few apoptotic keratinocytes and subepidermal clefting (Max-Joseph spaces) were observed, accompanied by a lichenoid infiltrate of lymphocytes, histiocytes and eosinophils. Melanin incontinence and melanophages were also present within the upper dermis (Fig. 2). Direct immunofluorescence (DIF) demonstrated bright linear deposits of immunoglobulin G and complement 3 along the basement membrane zone (Fig. 3). Overall, the findings were consistent with lichen planus pemphigoides (LPP). 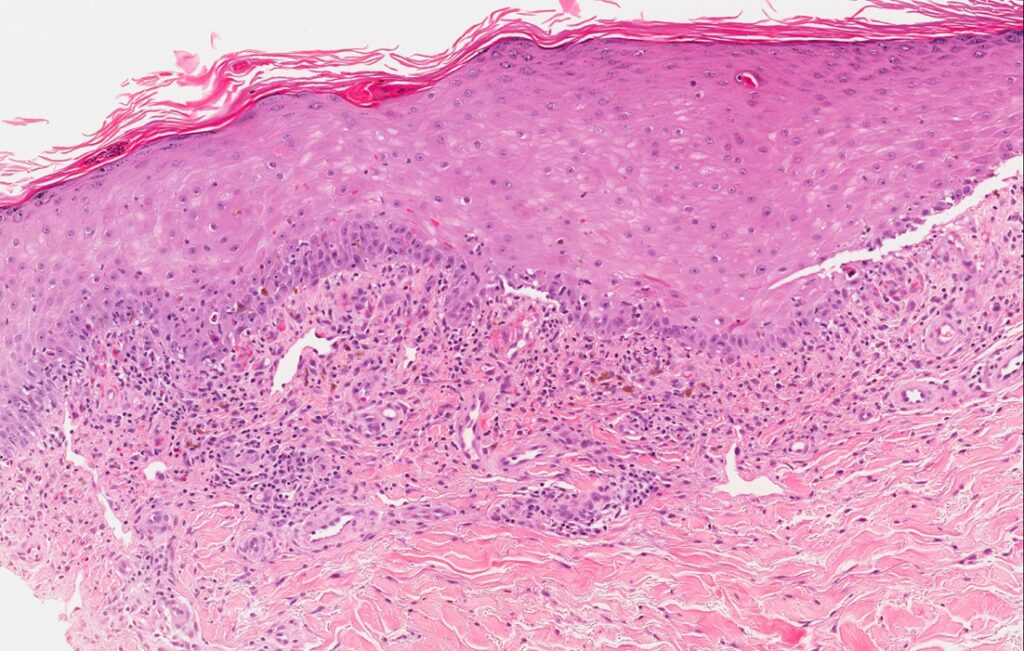 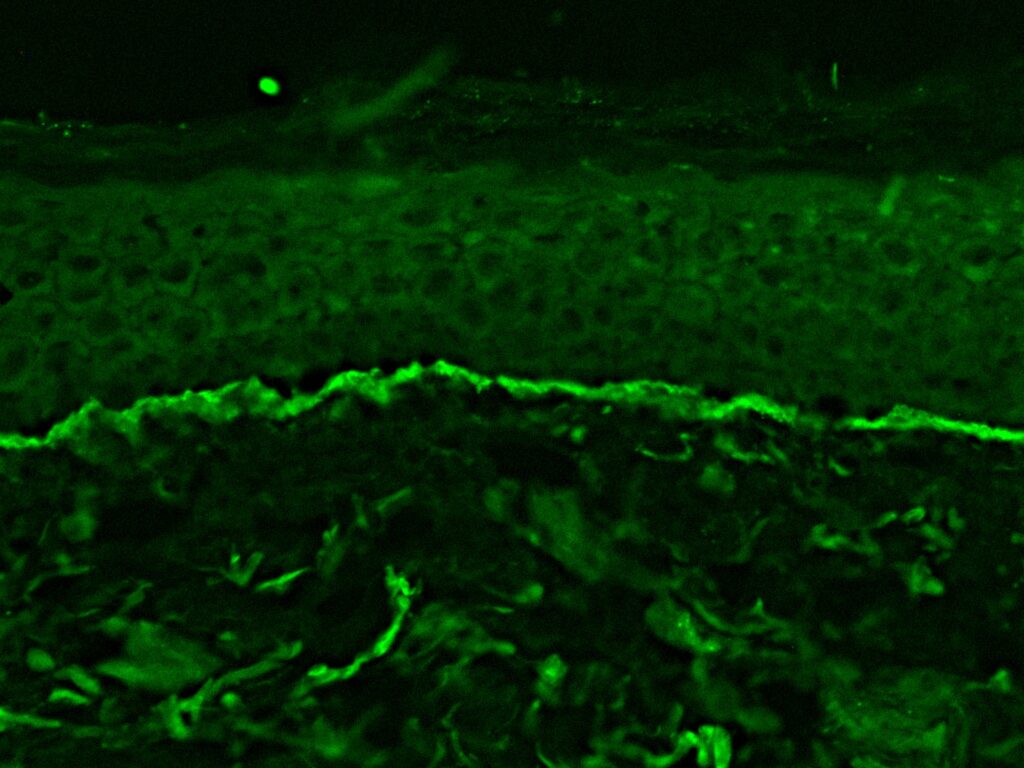 The patient was treated with topical clobetasol ointment, and the rash went into remission 6 weeks later, leaving post-inflammatory hyperpigmentation. Despite his cutaneous eruption, there was no interruption to his immunotherapy. He continued to receive infusions of pembrolizumab 4 times per week and has remained quiescent for 4 months.

Close differential diagnoses are bullous pemphigoid and bullous lichen planus (LP). Bullous pemphigoid is an autoimmune blistering disease that is characterised by the presence of urticated plaques and tense blisters. It may also be precipitated by PD-1 inhibitors. However, our patient does not have urticated plaques. His rash consisted of violaceous flat-topped papules and plaques.

Bullous LP is a variant of LP where bullae develop at sites of pre-existing LP lesions. This is due to severe basal vacuolar degeneration at the dermo-epidermal junction (DEJ). DIF findings of bullous LP are the deposition of immunoglobulins in cytoid bodies at the DEJ. In our patient, blisters developed on his skin, unaffected by LP lesions.

Disseminated superficial actinic porokeratosis (DSAP) is an inherited keratinisation disorder that causes red-brown scaly, annular papules and plaques mainly over the limbs. DSAP may also arise in patients who are immunocompromised. Although our patient also had a rash distributed over the limbs, the morphology of the rash is inconsistent with DSAP.

Cutaneous side effects have been reported in approximately 20–40% of patients treated with PD-1 inhibitors.1 Common cutaneous adverse events include eczematous dermatitis and pruritus, though a wide range of cutaneous manifestations such as vitiligo, lichenoid dermatitis, psoriasiform eruptions and bullous pemphigoid have also been observed.2

The treatment of lichenoid reactions from anti-PD1 agents similarly includes topical and systemic corticosteroids, based on a case series by Tetzlaff et al.3 Most patients had improvements in their skin lesions after using topical corticosteroids and stopping their anti-PD-1 therapy.

Among the 7 U.S. Food and Drug Administration-approved checkpoint inhibitors, LPP has been reported in treatment involving the use of nivolumab (3 cases), pembrolizumab (2 cases) and atezolizumab (1 case) thus far. Drug latency ranged from 12–24 weeks, with 2 cases developing LPP after drug cessation. In Sato et al.’s report, the patient had also been on vildagliptin, and this was deemed to be the more culpable drug.4 Okada et al. reported the onset of bulla 12 weeks after pembrolizumab cessation, although the patient had already developed prior lesions consistent with LP 12 weeks into pembrolizumab treatment.5 Lindner et al. reported an attempt to continue nivolumab, which led to further cutaneous worsening 12 weeks later and eventual cessation of the drug.6 In all other 3 cases, anti-PD1 agents were discontinued contemporaneously, with improvement or resolution of skin lesions occurring after 0.5 to 6 months. Of note, Schmidgen et al. highlighted the potentially recalcitrant nature of this dermatosis, whereby the skin lesions could not be controlled over a 12-month period despite potent immunosuppression including prednisolone, rituximab or sirolimus; remission was eventually achieved with a 6-month course of dapsone 50mg twice daily.7

Indeed, our patient’s drug latency corresponds to that in the literature, but to our knowledge, we also demonstrate the first successful resumption of immunotherapy without a worsening of LPP lesions. Immune-related adverse events (irAEs) to checkpoint inhibitors—of which LPP is one—may arise from the following mechanisms. First, pharmacologic blockade of the PD-1 pathway promotes T cell responses towards both malignancy and self. The latter results in proliferation of self-reactive T cells, which drive autoimmunity and thus, irAEs.8 Second, cross-reactivity between tumour antigens and self-antigens, including skin epitopes,9 has been described. Such molecular mimicry may account for cutaneous irAEs as bystander sequelae, a result of T cell-mediated anti-tumour responses. Indeed, evidence of irAEs being associated with superior oncologic outcomes10 lends weight to the above mechanistic hypotheses in the second point. Extrapolating from the second hypothesis, it is of the authors’ view that successful treatment with anti-PD-1 therapy leading to a reduction in tumour burden also concomitantly reduces tumour antigen load and thus, risk of cross-reactivity. This may potentially explain the lack of LPP recurrence despite continuation of anti-PD-1 therapy, as experienced by our patient.

With the increasing use of PD-1 antibodies in the treatment of various malignancies, recognising rare cutaneous toxicities would become increasingly important. Our case demonstrated typical features of LP pemphigoides both clinically and immunohistologically, and highlights the need to characterise and biopsy patients presenting with immunotherapy-induced rashes to improve understanding of this phenomenon. The case also demonstrates that a lichenoid reaction with pembrolizumab may not preclude the continuation of immunotherapy.