A 45-year-old Chinese woman with no medical history or regular medications presented with painful nodules on her left shin that progressed to involve her right shin, thighs and lower back over a period of 3 months. There was associated lower limb joints stiffness. Systemic review revealed constitutional symptoms of loss of appetite, night sweats and amenorrhea of 3 months’ duration. She also had unintentional weight loss of 7kg over the preceding 2 months. Examination demonstrated multiple indurated erythematous to violaceous plaques and nodules over bilateral thighs, calves and shins (Fig.1), associated with bilateral lower limb pitting oedema up to mid-thigh. 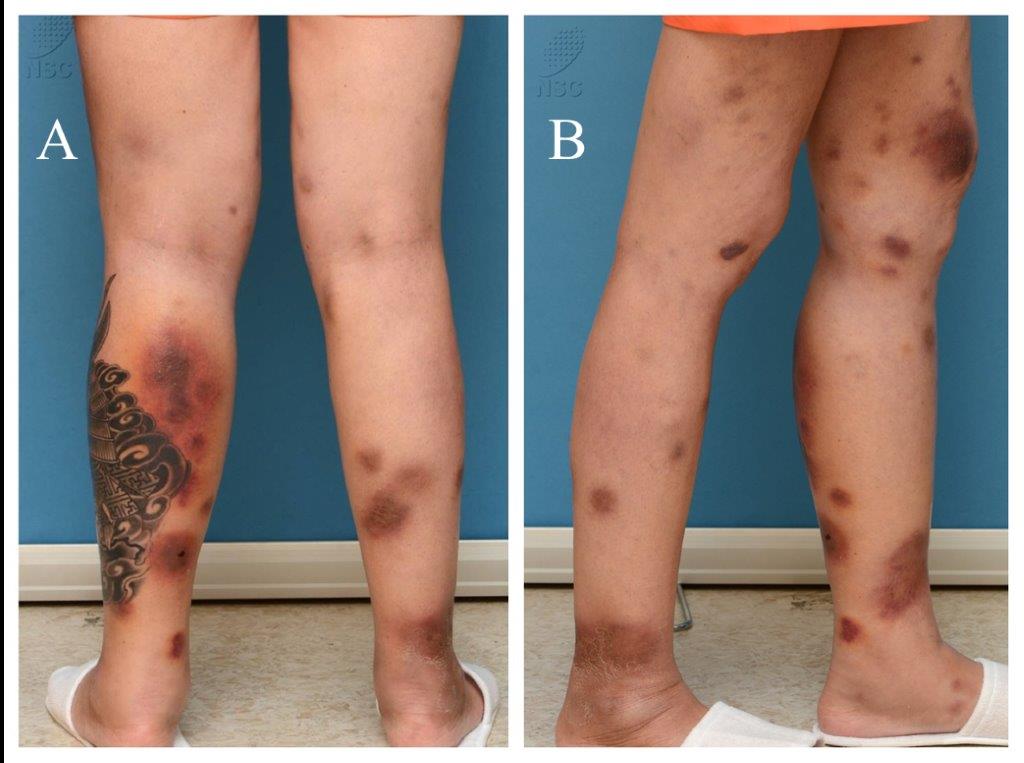 Fig. 1. Indurated erythematous to violaceous plaques and nodules on
bilateral lower limbs associated with lower limb oedema from (A) posterior
and (B) right lateral views.

Skin biopsy from a right thigh nodule demonstrated a lobular panniculitis. There was extensive necrosis of the subcutis, with a dense neutrophilic infiltrate. Characteristic ghost cells were seen and basophilic calcifications were present (Fig. 2). There was no vasculitis. Ziehl-Neelsen stain was negative for acid-fast bacilli.

level of <3.5. Tumour markers were elevated with CA-125 at 1093U/mL, CA 19-9 at 371U/mL and alpha-fetoprotein at 16μg/L. Pan-computed tomography imaging revealed extensive mass lesions along the peritoneum, lesser sac, porta hepatis, omentum and mesentery that were inseparable from the pancreas. There was also a moderate left pleural effusion and indeterminate rounded lymph nodes in the anterior mediastinum and left axilla. Biopsies of the peritoneal and pelvic masses both reported adenocarcinoma on histology.

She was empirically treated with oral prednisolone initially, with only partial improvement of the skin nodules.

What is the most likely diagnosis?

Discussion. Various conditions may present clinically with subcutaneous skin nodules. Polyarteritis nodosa is a multisystem vasculitis that often presents with cutaneous involvement, such as palpable nodules and ulcers, with constitutional symptoms and arthritis. Histology characteristically demonstrates segmental necrotising vasculitis of the medium-sized arteries within the deeper dermis and subcutaneous fat.1

Sarcoidosis is another multisystem disorder that can present with cutaneous papules and plaques, commonly red-brown in colour, involving the lower limbs and sites of previous injury. Histologically, non-caseating epitheloid cell granulomas are usually observed.2

Panniculitides, or disorders of the subcutaneous fat layer, represent another category of conditions that may present as subcutaneous nodules. They may be differentiated by clinical features and the 2 major histologic patterns of panniculitis—septal and lobular.

Erythema nodosum, the most common panniculitis, typically presents with subcutaneous nodules on the Erythema induratum, on the other hand, is an uncommon panniculitis that usually presents with subcutaneous nodules on the posterior lower limbs, and is associated with mycobacteria tuberculosis infections.3 Histologically, it is a septo-lobular panniculitis with granulomatous inflammation, fat necrosis and associated acute vasculitis.3

Our patient was diagnosed with pancreatic panniculitis following the skin biopsy, which showed characteristic features: a lobular panniculitis with extensive necrosis, an acute neutrophilic inflammatory infiltrate with characteristic ghost cells, and basophilic calcification. This was further supported by laboratory findings of raised lipase levels and radiological evidence of extensive mass lesions with pancreatic involvement. An eventual biopsy of one of the peritoneal masses confirmed a diagnosis of metastatic primary pancreatic adenocarcinoma.

Clinically, it presents as erythematous, oedematous, painful nodules on the lower extremities, sometimes on the anterior trunk, arms and scalp.6 They can occur singly or in crops, with the potential to ulcerate and migrate.6 Laboratory investigations often reveal raised lipase levels as in our patient’s case. Tumour markers such as CA 19-9 may also be raised,8 as in this case.

Of note, our patient’s presentation was accompanied by initial peripheral eosinophilia and inflammatory arthritis. This could represent fulfilment of Schmid’s triad—a rare clinical syndrome characterised by a triad of panniculitis, polyarthritis and eosinophilia in patients with pancreatic tumour. This triad is associated with poorer prognosis.6,9

Management centres on treatment of the underlying pancreatic disease, such as resection of tumours, though supportive measures such as local compression may be helpful if ulcerations are present. Octreotide can also be considered in the setting of acute pancreatitis to inhibit pancreatic enzyme synthesis.6 Our patient underwent chemotherapy and follow-up scans showed radiological improvement of the peritoneal masses. Correspondingly, she had marked amelioration of her bilateral lower limb nodules, with reduced pain and some even resolving completely.

A man with bark-like skin

A man with bark-like skin