A young woman presented to the Singapore General Hospital with a history of cough in the 2 weeks prior. She had no significant past medical history and no history of immunocompromised state. Chest radiograph showed cardiomegaly. Electrocardiogram showed low voltages in precordial leads (Fig. 1A). A computed tomography scan of the chest was performed, which showed a low-density large pericardial effusion with enhancement of the thickened pericardium, as well as patchy consolidation in the lung bases with partial left lower lobe collapse (Fig. 1A).

She was initially covered with intravenous antibiotics (co-amoxiclav) and a pericardiocentesis was unsuccessfully attempted. The patient subsequently underwent an emergency left anterior thoracotomy, with the creation of a pericardial-pleural window. Intraoperatively, 650mL of haemoserous pericardial effusion was drained. The pericardium was noted to be thickened with intra-pericardial fibrin, and the epicardial surface of the heart was inflamed. The 2 specimens were sent to the anatomical pathology and microbiology laboratories, respectively. Gram stain of the pericardial fluid, however, was negative. After 72 hours of incubation, there was no growth of organisms from culture of the pericardial fluid, pericardial tissue or tissue from the intrapericardial fibrin, and the initial plates were discarded.

Histopathology review of tissue from the pericardial biopsy demonstrated fibrinous exudates on the visceral aspect, overlying granulation tissue with superimposed acute and chronic inflammation, and abscess formation. Within one of the abscess areas, a single branching filamentous bacterial colony was identified in the haematoxylin and eosin section, and positively highlighted by Grocott’s methenamine silver (Fig. 1B). This finding was communicated to the microbiologist by the infectious disease physician. Pericardial tissue specimens were retrieved and re-inoculated on plates for prolonged incubation under conditions optimised for the recovery of anaerobic organisms (blood agar and MacConkey agar incubated at 35°C in 5% CO2, and CDC anaerobe blood agar incubated anaerobically at 35°C). On day 6 of re-incubation, 3 whitish colonies grew on the CDC anaerobe blood agar. Gram stain microscopy of the bacterial colony showed gram-positive bacilli (Fig. 1C). 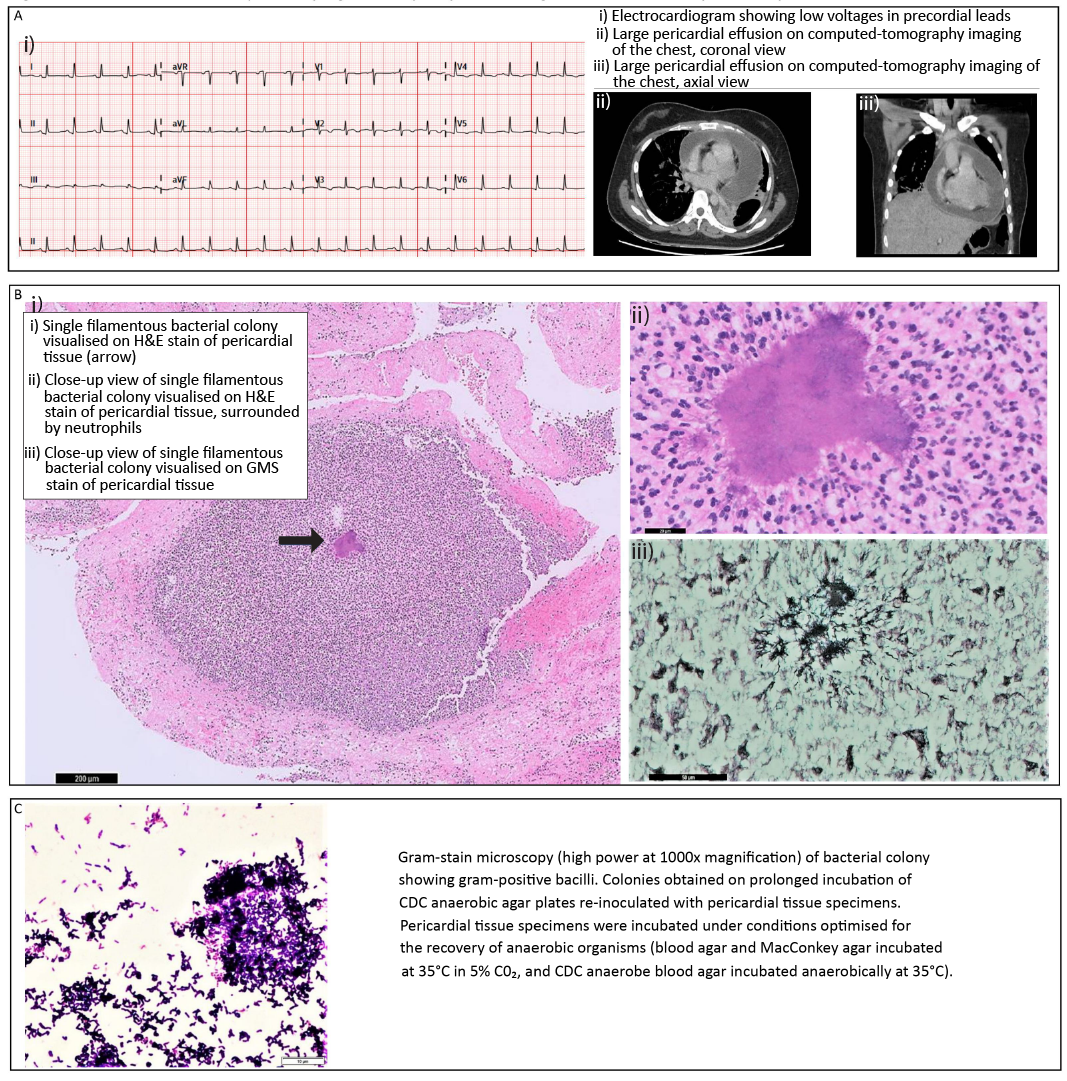 While pneumococcal infection is a common cause of purulent pericarditis, this would present as gram-positive cocci instead of gram-positive bacilli. Additionally, in-house partial 16S ribosomal RNA gene sequencing performed on pericardial tissue identified Actinomyces spp. and Fusobacterium spp. Periodontitis was noted on dental review. The patient received 6 weeks of intravenous ceftriaxone, followed by high-dose amoxicillin (1g 3 times a day) for another 6 months, with clinical and radiological resolution (Fig. 2). At 10-month follow-up, the patient remained well without relapse.

The presence of a rare, though compatible clinical syndrome (anaerobic pericarditis caused by Actinomyces spp. presenting as cardiac tamponade), and concordance of microbiological and histopathological findings, together with clinical response to culture-directed therapy, made the alternative diagnosis of incidental contamination extremely unlikely.

Pericarditis due to anaerobic bacteria remains a rare entity; the true incidence may be underestimated due to a lack of or inadequate anaerobic culture techniques.1 The mechanism of occurrence is postulated to arise via spread from a contiguous site of infection (eg. pleuropulmonary), via haematogenous infection, or direct inoculation resulting from a penetrating injury or surgery.1

In our patient, we postulate that pericardial actinomycosis occurred via pleuropulmonary spread, with periodontal disease as a known risk factor for this rare condition.2 Pericardial involvement is an uncommon manifestation of actinomycosis, seen in <2% of cases.3 The condition frequently goes unrecognised due to a low rate of positivity in cultures.2 Clinical clues to the identity of the causative organism (e.g. draining sinus tracts, with presence of sulphur granules) are often absent in pericardial actinomycosis, and histologic examination of tissue samples is often necessary to make the diagnosis.2

Treatment generally involves at least 4–6 weeks of effective intravenous antimicrobials, followed by 6–12 months of suppression with oral antibiotics, in view of the high risk of relapse.2 While pericardial actinomycosis can evolve into cardiac empyema, presentation as cardiac tamponade is uncommon and has only been reported in isolated case reports.3-5 Concomitant recovery of other anaerobic organisms (e.g. Fusobacterium spp.) has also been demonstrated,2,4,5 especially with greater usage of molecular techniques.

In conclusion, pericardial actinomycosis presenting as cardiac tamponade is uncommon. Early recognition is crucial given potential mortality,5 and complete cure is achievable with appropriate surgical intervention and antimicrobial treatment. In this case, close cooperation and communication among the microbiologist, pathologist, infectious disease physician and surgeon upon suspicion of this rare condition was critical in enabling timely microbiological confirmation of pericardial actinomycosis and institution of appropriate treatment.

Attitude towards screening for congenital cytomegalovirus infection in newborns in Singapore

Attitude towards screening for congenital cytomegalovirus infection in newborns in Singapore