We would like to highlight the need to reduce intraoperative frozen section (FS) during diagnostic hemithyroidectomy performed on thyroid nodules with Bethesda III cytology. Thyroid nodules are increasingly diagnosed and subjected to fine needle aspiration cytology. Bethesda III is a cytological category that consists of atypia or follicular lesion of undetermined significance, and carries a 6–30% risk of malignancy.1 Hemithyroidectomy is commonly performed on Bethesda III nodules to obtain a definitive histological diagnosis. FS during hemithyroidectomy allows some thyroid cancers—predominantly papillary thyroid carcinoma (PTC)—to be diagnosed intraoperatively.2 Such a diagnosis may prompt the surgeon to perform a total thyroidectomy and/or central neck dissection. However, the routine use of FS on Bethesda III nodules is controversial considering the low probability of a diagnosis of malignancy on FS,2 and such a diagnosis would not necessarily alter the extent of surgery.3 Until 2016, we practised FS routinely on Bethesda III nodules followed by total thyroidectomy with or without elective central neck dissection, if thyroid carcinoma was diagnosed on FS—except for papillary thyroid microcarcinomas. In view of recent guidelines recommending hemithyroidectomy without elective central neck dissection to be an acceptable treatment of well-differentiated intrathyroidal papillary carcinomas that are ≤4cm,3 we reviewed our experience to determine how FS in Bethesda III nodules may be reduced.

After obtaining ethics approval from our institution in Singapore, we studied the preoperative clinical, sonographic and pathologic characteristics associated with the diagnosis of malignancy or suspicion of malignancy on FS in 98 Bethesda III nodules from 98 patients. These patients underwent hemithyroidectomy and FS in our department from 2010 to 2016. Sonographic characteristics were retrieved from the radiologist’s report and suspicion of malignancy, defined by the presence of any of these features—microcalcification, marked hypoechogenicity, tallerthan-wider configuration, irregular margin, extrathyroidal extension or abnormal cervical lymph nodes—was considered present if it was so specified by the radiologist. Cytologic nuclear atypia was diagnosed when nuclear enlargement, pale or clear chromatin, grooves or pseudoinclusions were seen in various combinations in the follicular cells, but were insufficient for a diagnosis of suspicion of malignancy (Bethesda V) or malignancy (Bethesda VI). 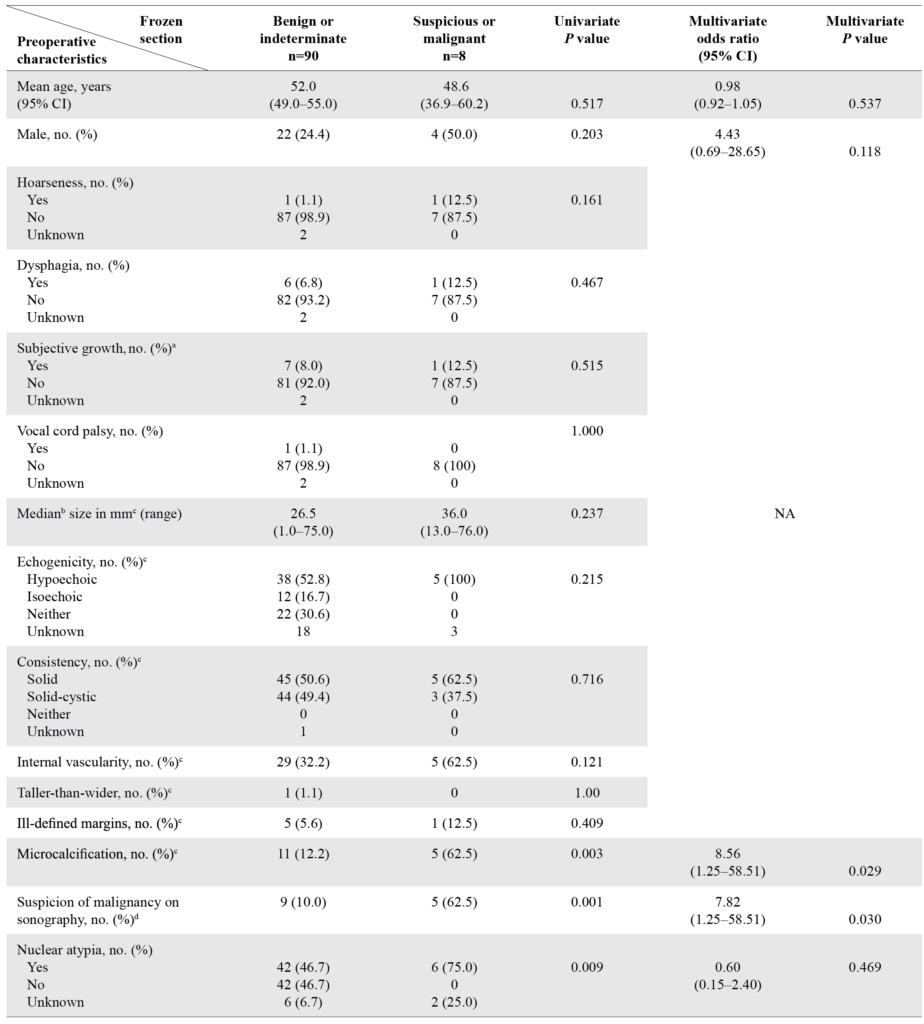 However, even if we only selected Bethesda III nodules with either microcalcification or a radiologist’s suspicion of malignancy for FS, the likelihood of a diagnosis of malignancy on FS would only increase from:

Moreover, the size of the 3 PTCs diagnosed on FS were 1.3cm, 2.6cm and 3.5cm pathologically. None demonstrated gross extrathyroidal extension or nodal metastasis intraoperatively. Only 1 tumour diagnosed as malignant on FS, a medullary carcinoma (MTC), showed gross extrathyroidal extension and gross nodal metastases. This would be the only tumour that certainly required a total thyroidectomy and neck dissection. Therefore, FS in our series of Bethesda III nodules would convincingly change the extent of surgery in only 1 out of 98 patients (1.02%). Even in this patient, the fact that his MTC was diagnosed as Bethesda III was unusual. Upon review of the cytology, we found clues of MTC—the most important being the presence of singly dispersed cells misinterpreted as follicular cells. However, the cytology lacked amyloid, and was insufficient for immunohistochemistry. Neither was serum calcitonin or carcinoembryonic antigen available because MTC was not suspected clinically. If it had been, this MTC would probably be diagnosed preoperatively, therefore not requiring FS for confirmation of malignancy.

Up till 2015, professional bodies such as the American Thyroid Association (ATA) have endorsed total thyroidectomy as a preferred treatment for PTCs >1cm in the longest dimension, and permitted elective central neck dissection for these PTCs.5 Referenced by ATA, a study of the US National Cancer Database (NCDB) demonstrated that total thyroidectomy was associated with lower hazard of recurrence or death in patients with PTCs >1cm.6 However, single institution studies with more details on patient selection7 and a contemporary analysis of the NCDB8 have since demonstrated no detriment to disease-specific or recurrence-free survival in patients who were treated with hemithyroidectomy alone for well-differentiated intrathyroidal PTCs ≤4cm without nodal metastasis clinically. Therefore, both hemithyroidectomy and total thyroidectomy are now endorsed by ATA as management options for these PTCs in the absence of a history of neck irradiation or familial PTC.3

Recent guidelines worldwide, including a consensus statement from Singapore,9 are also supporting this “less may be more” approach towards the treatment of these typically indolent cancers, as hemithyroidectomy decreases the need for thyroid hormone replacement, calcium supplementation and the risk of recurrent laryngeal nerve injury. As elective central neck dissection has not been shown to improve disease-specific survival in patients with these PTCs,10 but instead increases the risk of hypoparathyroidism and recurrent laryngeal nerve injury, the ATA made a strong recommendation against it since 2015. Therefore, current guidelines recommend that only PTCs >4cm, or those with gross extrathyroidal extension or gross nodal/distant metastases, be routinely treated with total thyroidectomy and central neck dissection.3,9 Although sonographic suspicion of malignancy increases the likelihood of diagnosing thyroid cancer on FS, the extent of surgery would not necessarily change considering recent evidence. Selecting Bethesda III nodules that are sonographically suspicious and >4cm, or those with gross extrathyroidal extension or metastasis for FS, may be a way to improve the utility of this investigation.

Declaration
This paper was first presented as oral presentations at the ENT World Congress, 2017 and the Asia Pacific Thyroid Congress, 2018. The authors have no funding and conflict of interest to declare.

Barriers to breast cancer screening in Singapore: A literature review

Cause of vaginal spotting in an older woman

Barriers to breast cancer screening in Singapore: A literature review

Cause of vaginal spotting in an older woman