A 57-year-old woman presented with first onset syncope, which was witnessed by her family members. It occurred in the middle of a conversation and lasted for 30 seconds, followed by spontaneous and prompt recovery. There was upward rolling of eyeballs with no witnessed tongue biting, jerking of limbs or urinary incontinence. There was no family history of sudden cardiac death or heart disease. She denied symptoms of chest pain, palpitation, dyspnoea, diaphoresis and fever. She was not taking any medication or over-the-counter supplements. In addition, there was no identifiable stressors preceding this syncopal episode. 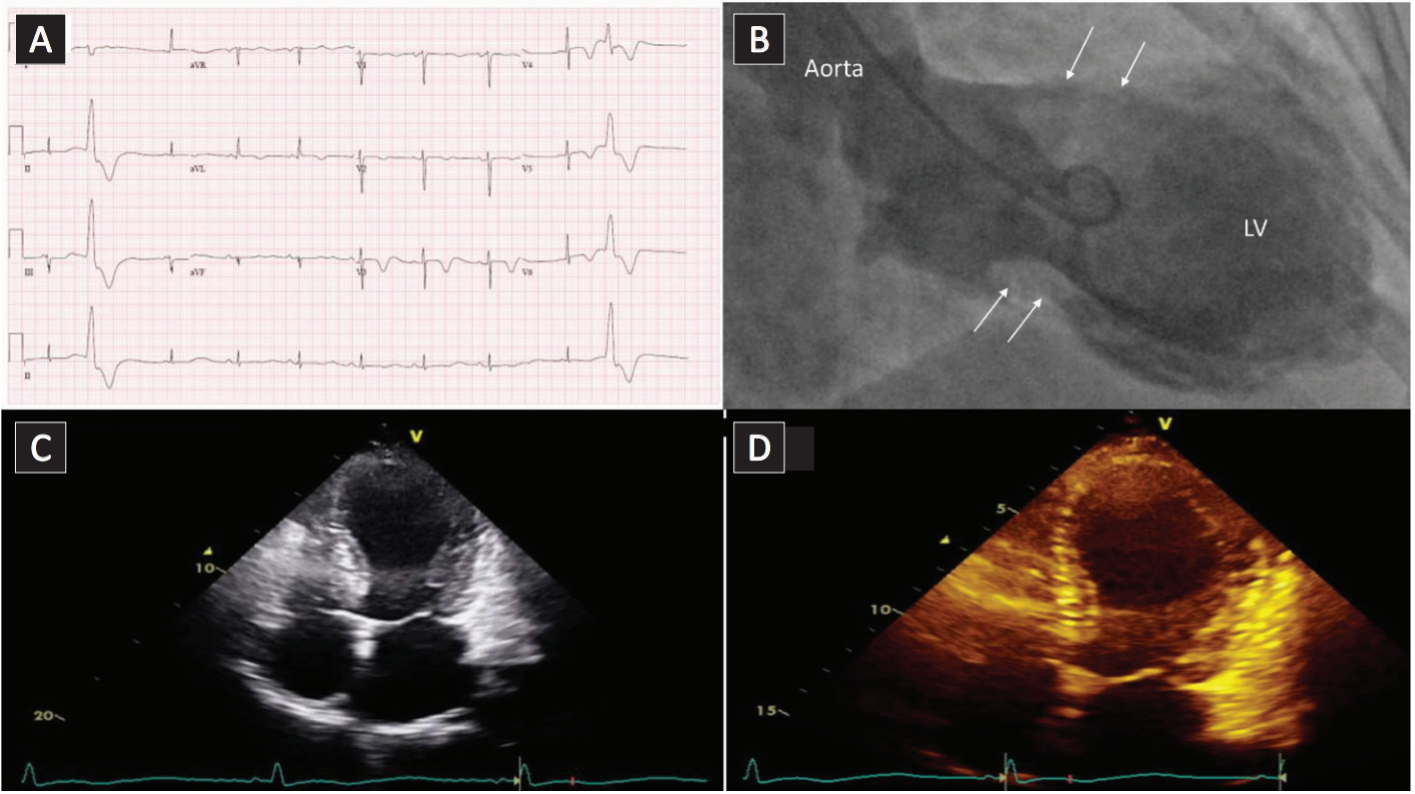 During the cardiac catheterisation, patient developed recurrent episodes of torsades de pointes (TdP), and required electrical cardioversion (Fig. 2A). A temporary pacing wire (TPW) was inserted in view of recurrent TdP with a back-up pacing rate set at 80 beats per minute. Cardiac magnetic resonance imaging (CMR) was carried out to exclude reversible causes including myocarditis.

What do Figs. 1 and 2 demonstrate?

CMR showed early oedema in the apex, consistent with diagnosis of takotsubo cardiomyopathy (TCM) (Fig. 2A). There was no evidence of late gadolinium enhancement or features of myocarditis on CMR.

The patient had regular 12-lead ECGs and her QTc remained lengthened at 500–600ms with frequent PVCs seen despite initiation of beta-blockers. Furthermore, when attempting to wean off TPW by reducing the pacing rate to 50bpm, the patient developed TdP. Decision was made for insertion of implantable cardioverter defibrillator (ICD) for secondary prevention. ICD was implanted on day 14 of hospitalisation. She was discharged well on bisoprolol, atorvastatin and aspirin. Subsequent TTE (2 months post-discharge) showed resolution of wall motion abnormalities with recovery of LVEF to 55%. A follow-up 12-lead ECG showed atrial paced rhythm with QTc of 456ms (Fig. 3). Device interrogation did not reveal any episode of ventricular arrhythmia. 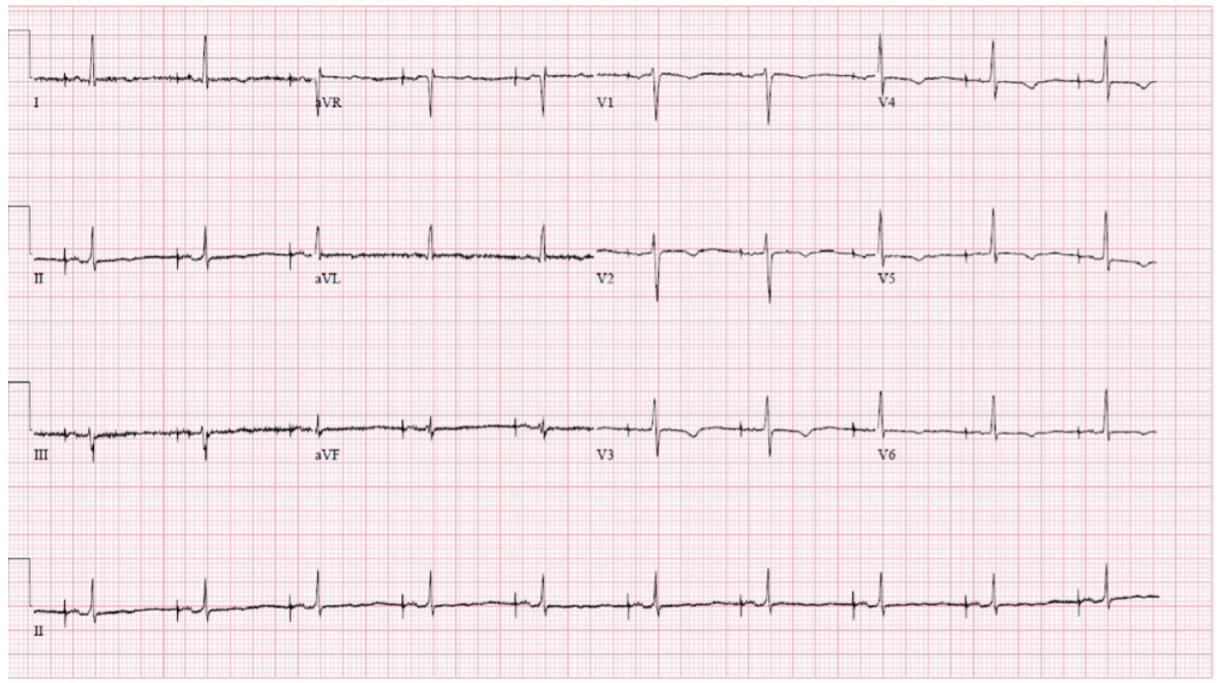 Coronary artery dissection and vasospasm are key differential diagnoses to consider in this case. Thus, coronary angiogram remains the gold standard in evaluating coronary anatomy. However, the presentation was atypical as patients would usually complain of chest pain rather than syncope. Myocarditis needs to be excluded in the setting of raised troponin, wall motion abnormalities and patent coronaries. Lake Louise criteria placed a great emphasis on CMR as an imaging modality in diagnosing myocarditis. Arrhythmogenic right ventricular cardiomyopathy is less likely in the absence of right ventricular impairment and dilatation.

This case highlights the association of recurrent episodes of TdP from acquired long QTc syndrome and TCM. Investigation for prolonged QT interval remains challenging as this often involves multiple modalities with a wide range of differential diagnosis to entertain. Female and old age are the only non-modifiable predisposing factors for acquired long QT-syndrome (LQTS).1 TCM, despite being a reversible form of cardiomyopathy, may not be benign as this patient presented with syncope with evidence of prolonged QT interval and required an ICD as secondary prevention. It is known that the risk of TdP escalates as QT interval increases.2 Early afterdepolarisation-induced triggered activity in the setting of catecholamine excess has been postulated to increase TdP risk. Our patient presented with a substantially prolonged QT interval of 600ms, which had likely led to cardiogenic syncope from Tdp. The QT interval shortened to 456ms after recovery from TCM with no further ventricular arrhythmias detected. Reduction of QT interval (Tpeak–Tend/QT ratio) dispersion are associated with recovery.3

TCM is a rare disorder characterised by transient, reversible left ventricular dysfunction commonly triggered by emotional or physical stress. The US Mayo Clinic criteria are widely adopted by cardiologists in an attempt to better describe the syndrome.4 The association between TCM and acquired LQTS have been described in case reports.5 However, life-threatening arrhythmias (ventricular fibrillation or TdP) in this group of patients are extremely uncommon.

Emotional and physical stressors are recognised triggers for TCM. However, in approximately 30% of patients, TCM occurred without any evident trigger.6 To note, emotional stress or lack of identifiable triggers is more common in women while physical stress leading to TCM is more common in men. There were no identifiable physical or emotional stressors in our index case. Singapore studies have demonstrated that TCM mainly affects post-menopausal women with recent trigger from a surge in catecholamines.7,8

Management of TCM remains largely supportive to sustain life and minimise complications until full recovery, which may take weeks. To date, there have been no randomised trials to define optimal treatment of TCM. The use of angiotensin-converting-enzyme inhibitors or angiotensin receptor blockers was associated with improved survival, though the usage of beta-blockers was not.6 Temporary transvenous pacing should be considered in the acute setting if patient has TdP.9 In this case, there were additional features suggestive of high-risk LQTS (post-TCM QTc >500ms, previous syncope and TdP), which necessitate the implantation of ICD.10

In conclusion, TCM should be recognised as one of the causes of acquired long QT syndrome, in addition to its associated risk of Tdp. There is still much to learn regarding the aetiology and underlying pathophysiology of TCM. Future studies including randomised trials are needed for optimal management of this condition.