Emergence from anaesthesia and deep sedation is the transition from unconsciousness to the return of awareness and airway reflexes. The chief patterns of unsafe recovery include sudden unpredictable emergence or delayed return of airway tone and reflex with risk of airway obstruction.1 Agitation includes straining, sitting up, screaming or shouting. Even with supraglottic airway (SGA) use, coughing and expulsion of airway secretions can occur in 14–19% of patients.2

Emergence is more predictable when guided by surrogate measures of anaesthetic depth evaluated by processed cortical electroencephalography (EEG) analysis, such as the bispectral index monitoring system (Covidien-Medtronic, Boulder, US) or SedLine (Masimo Corp, Irvine, US);3 or volatile anaesthetic concentration measurements of end-expiratory gas analysis. However, these require specialised equipment that is largely limited to the operating theatre (OT) environment. These technologies are less consistently employed when patients are sedated or anaesthetised in resource-limited settings, or in locations outside the OT and in post-anaesthesia care units (PACU) where patients recover with airway devices in situ until they can maintain their airway patency unassisted.

A randomised controlled trial was conducted to evaluate the use of a novel technique utilising pressure on the tragus—a fleshy prominence in front of the ear canal—to guide emergence. The tragus pressure technique (Fig. 1) encompasses the application of 3–5 seconds of pressure at 10–30 newtons on the tragus, calibrated by staff pre-trained with using weighing scales to apply optimal non-nociceptive pressure on the tragus.

Tragus pressure application is postulated to stimulate neuro-humoral outflow, thalamo-cortical projections and the reticular activating system.4-6 This might produce arousal to wakefulness without resulting in sudden emergence, thus guiding and smoothening the process of emergence, removal of airway devices, and safe recovery. The application of tragus (TG) pressure (acupuncture points TG1 and TG2) with counterpressure at the intertragal notch and antitragus (AT) (acupuncture points AT1, AT2 and AT3) shown in Fig. 1 is known to stimulate airway and autonomic responses.7,8  This pressure application might have triggers on the projections to  solitary nucleus, which is in turn part of the complex neural circuitry that contributes to arousal to hypercarbia.7 We evaluated the facilitation of emergence from anaesthesia and deep sedation through the application of tragus pressure in this randomised controlled study. 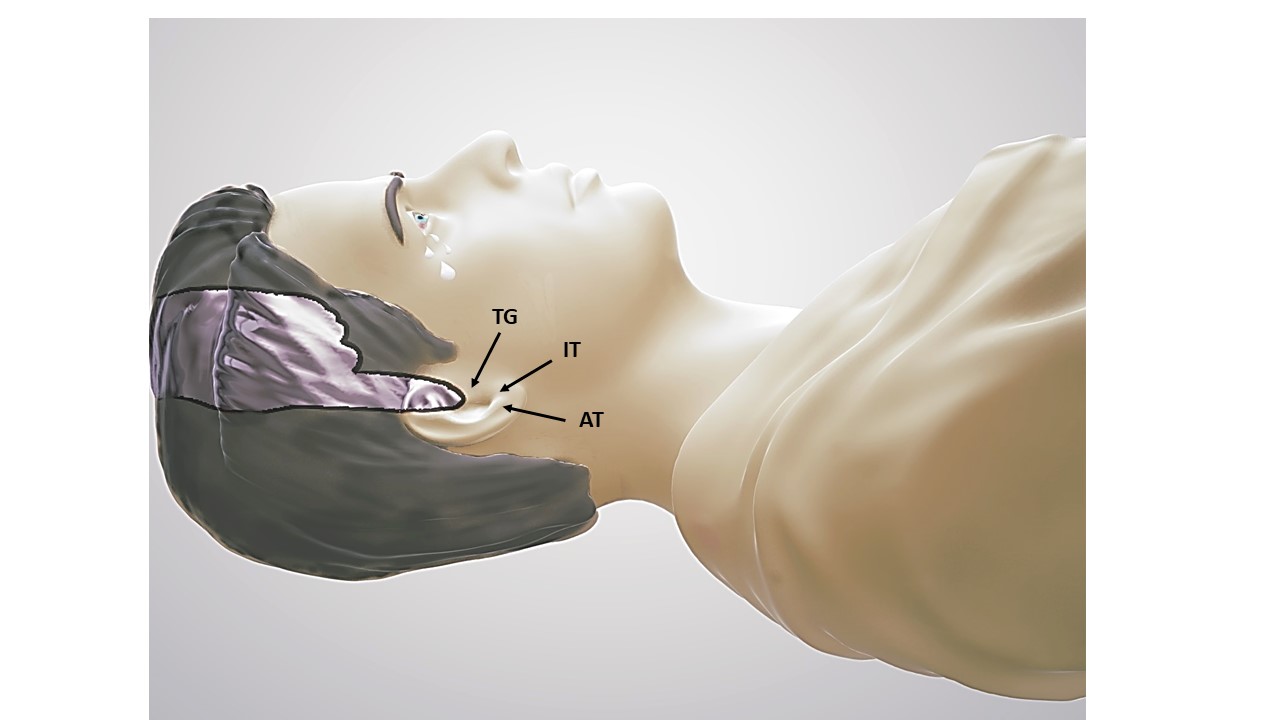 Fig. 1. Application of pressure on the tragus with a steady pressure at 10–30N for 3–5 seconds and releasing the pressure is postulated to trigger tragus (TG) (includes acupuncture points TG1 and TG2), intertragus (IT) notch and antitragus (AT) (includes acupuncture points ATI, AT2 and AT3). Stimulation of these points corresponds to the activation of neuronal outflows from the brain stem to the cortex. Image demonstrates signs of emergence to tragus pressure application: pupillary dilatation, conjunctival injection, eye opening and tears. Other signs (not shown) include the presence of grimacing, tight closure of eyelids/lifting of eyebrows, swallowing movements and gentle motor movements in extremities (shrugging of shoulders/movement of fingers).

Approval was obtained from the institution’s ethics review committee (NHG Domain Specific Review Board DSRB Ref: 2017/00071), and the study was registered with ClinicalTrials.gov (ID: NCT04331756) prior to the commencement of the study. All patients who had consented and signed a written informed consent were included in the study.

The primary outcome that the study aimed to explore was the reduction of incidence of airway events (airway obstruction, laryngospasm and negative pressure pulmonary oedema) or patient-deterioration, that necessitated manoeuvres to maintain airway patency. Power calculation based on an anticipated airway event reduction to <5% showed a sample size of 500 with 250 in each arm (tragus and control). The secondary outcomes included the assessment of predicted time-to-emergence, emergence profile and evaluation of the usefulness of tragus pressure in minimising agitation from rapid, uncontrolled sudden emergence. Sudden emergence was identified by the occurrence of thrashing, biting on the airway devices, lip or tongue, or dislodgement of intravenous and arterial/central venous lines. Block randomisation was achieved through segments of 100 each, with allocation concealment ensured until the arrival of patients in PACU (online Supplementary Fig. S1 for consort diagram). Statistical analysis was performed using SPSS Statistics version 25.0 (IBM Corp, Armonk, US). Univariate analyses (chi-square and Fisher’s Exact tests) were used to identify differences between groups.

Results. All patients aged from 21 to 65 years scheduled for short surgical procedures under general anaesthesia with SGA were eligible for the study. A total of 371 patients were recruited and randomised into tragus (n=182) and control (n=189) groups. A total of 272 patients were included for analysis (tragus n=140, control n=132) due to dropouts from changes in anaesthetic technique such as the conversion of SGA to tracheal intubation, patient awakening prior to arrival or waking up immediately on arrival in PACU, before data collection could commence.

Study data (online Supplementary Table S1) revealed a lower incidence of uncontrolled emergence with patient flailing (2.6% for tragus versus 8.3% for controls) and biting on the airway device (23.4% for tragus vs 32.8% for control). The mean time-to-emergence was comparable (tragus  11min 29s vs control 12min 42s).

A subgroup analysis was performed by stratification of patients according to anaesthetic depth based on the last recorded end-tidal volatile anaesthetic concentrations before leaving the OT. Patients with lighter anaesthetic planes (minimum alveolar concentration [MAC] <0.3) had an increased incidence of adverse events during emergence at PACU in the control group such as biting (37.5% control group vs 18.2% in tragus group), and flailing (12.5% control group vs 0.0% in tragus group). There were no incidences of airway complications (airway obstruction and desaturation to <95%) in the tragus pressure group, suggesting the safety of the technique. Further data collection was ceased as no new patterns emerged.

Discussion. The different stages of anaesthesia and recovery were first described in unpremedicated, spontaneously breathing patients receiving diethyl ether as an inhaled anaesthetic. These stages are not elicitable in the originally described sequences with modern balanced anaesthesia. Advanced monitoring equipment, mathematical modelling of target-controlled infusions and use of end-tidal anaesthetic gas concentrations are all limited to the intraoperative measurement of anaesthetic depth. With increasing proportion of general anaesthetics being provided with SGA, more scientific and predictable ways of emergence are needed for bedside assessment of anaesthetic depth in PACU, and for recovery of patients and SGA removal.

We identified tragus pressure as a simple, predictable intervention to guide smooth emergence from anaesthesia, while potentially minimising the risks of rapid emergence. The tragus pressure-guided emergence technique is easily reproducible, safe and inexpensive. It stratifies patients into non-reactive and reactive phases. Reactive phase features the occurrence of pupillary dilation, facial grimace, contraction of orbicularis oculi, eye opening or gentle motor movements such as shrugging of shoulders or fine movements in hand as a response to tragus pressure application (Fig. 1). This reactive phase is a predictable component of impending emergence from anaesthesia, an indication of the optimal plane for SGA removal (without laryngospasm). It is also a primer of anticipated emergence necessitating closer monitoring by attending staff. This predictability is particularly vital in resource limited settings (compromised nurse-patient ratios), clinical environments with very rapid turnover such as PACU and remote locations for anaesthesia and deep sedations (dental, endoscopy and radiology), where expertise in airway management is scarce.

Managing adult asthma during the COVID-19 pandemic: A 2022 review and current recommendations

Antiphospholipid and other autoantibodies in COVID-19 patients: A Singapore series

Managing adult asthma during the COVID-19 pandemic: A 2022 review and current recommendations

Antiphospholipid and other autoantibodies in COVID-19 patients: A Singapore series