An 81-year-old man who had been fully vaccinated against COVID-19 was admitted to the medical intensive care unit on day 5 of his COVID-19-induced pneumonia for high flow nasal oxygen treatment. He had hypoxaemic respiratory failure secondary to acute respiratory distress syndrome (ARDS) from the COVID-19-induced pneumonia. He had a past medical history of hyperlipidaemia, hypertension, type 2 diabetes mellitus and stage 3 chronic kidney disease. He was treated with an extended 14-day course of dexamethasone and tocilizumab (the latter, an anti-interleukin-6 [IL-6] antagonist). His hypoxaemic respiratory failure continued to worsen despite these therapies, and he had to be intubated and mechanically ventilated on day 11 of his admission. He was started on propofol infusion for sedation post intubation, ventilated using a lung-protective ventilation strategy and placed on prone positioning for severe ARDS. He was also started on enteral feeding. The second day after intubation, his renal function continued to worsen with refractory hyperkalaemia, and he was initiated on continuous renal replacement therapy (CRRT). The CRRT circuit began to frequently clot 2 days after the initiation of dialysis, despite the use of regional citrate anticoagulation. A whitish discolouration was noted in the patient’s blood and dialysis circuits, indicated by the arrows in Fig. 1 (taken on day 7 of intubation). 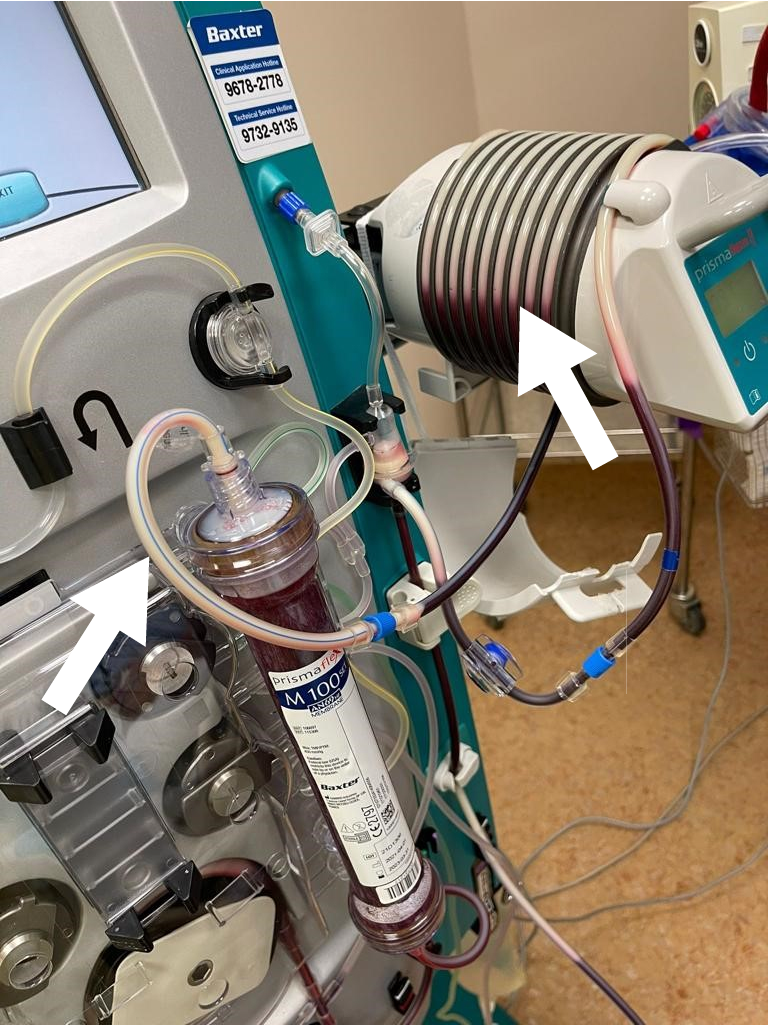 What is the cause of the whitish appearance of blood that led to frequent CRRT circuit clotting in this patient?

The cause of the whitish appearance of blood/tubing that led to frequent CRRT clotting in this patient was propofol-induced hypertriglyceridaemia (Figs. 1 and 2, and online Supplementary Figs. S1 and S2). 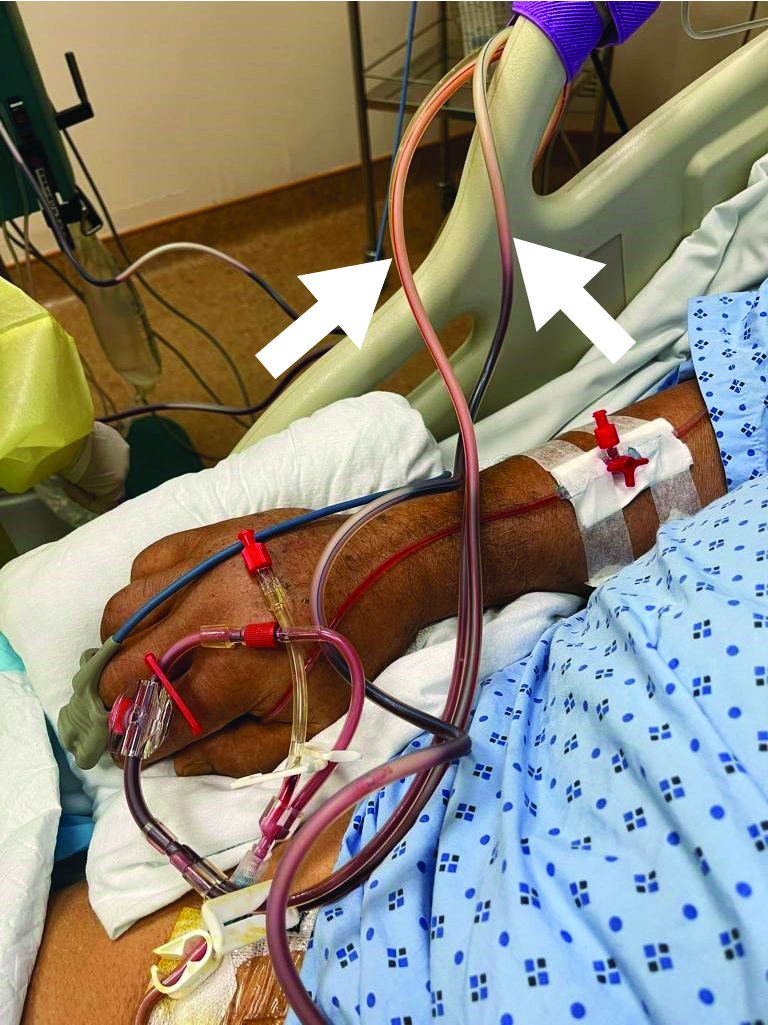 Fig. 2. White precipitate in the arterial port (left arrow) and venous port (right arrow) of the dialysis line access due to hypertriglyceridaemia.

Diagnosis. Lipid emulsion layering was seen in the CRRT circuit. It also clotted the filter on day 7 of intubation. This led us to suspect that this was caused by propofol infusion, which the patient was initiated on to ensure adequate sedation while on mechanical ventilation. Earlier, the patient had received high daily doses of propofol of 250–300mg (patient’s weight 80kg) with an infusion rate of 3.1–3.75mg/kg/h. High doses of propofol were required to achieve adequate sedation due to ventilator dyssynchrony from poor lung compliance as a result of severe ARDS. During this time, there was no evidence of propofol-related infusion syndrome such as bradycardia, arrythmias, hepatomegaly or rhabdomyolysis.

A serum lipid panel was checked on the same day the lipid emulsion layering was seen, and the triglyceride (TG) level recorded was 21.2mmol/L. Our patient had a baseline TG level of 5.98mmol/L, and he was on atorvastatin prior to admission. The high-dose propofol infusion was stopped and switched to midazolam infusion. The femoral dialysis line was also replaced, and the appearance of the whitish blood in the CRRT circuit resolved 4 days after propofol infusion was stopped, corresponding to a reduction in a serum TG level of 7.1mmol/L, repeated 2 days later (Table 1). This confirmed the diagnosis of propofol-induced hypertriglyceridaemia.

In severe stages of COVID-19, patients frequently develop respiratory failure requiring intensive care unit (ICU) admission and intubation with mechanical ventilatory support. Acute hypoxaemic respiratory failure from ARDS is the most common complication in patients admitted to the ICU. Propofol is a popular choice for sedation due to its rapid onset of action and easy titratability. Sedation with propofol decreases the incidence of ventilator dyssynchrony and is used as part of lung-protective ventilatory strategies. A review of studies points to an estimated 18–45% incidence of hypertriglyceridaemia with propofol.3 A Swiss study of 220 patients in the ICU showed that the median dose of propofol associated with hypertriglyceridaemia was 2.04mg/kg/h after a median of 4 days with higher dose propofol.1 A US study involving 552 patients found that approximately one third of patients developed hypertriglyceridaemia within a median time of 72 hours of propofol administration. The cumulative propofol dose was identified as a significant predictor of the development of hypertriglyceridaemia.4

In our patient, another potential cause to consider for the increase in triglyceride levels would be the use of an IL-6 inhibitor, tocilizumab. Tocilizumab is an IL-6 inhibitor used in the treatment of rheumatoid arthritis.5 Case reports have described that IL-6 inflammatory cytokine blockade results in greater production of apolipoproteins, which lead to higher cholesterol levels.1 Studies show that the use of tocilizumab in the treatment of rheumatoid arthritis leads to higher overall cholesterol, low-density lipoprotein (LDL) and triglyceride levels compared to patients treated with other disease-modifying anti-rheumatic drugs,6 but not to the extent that it causes severe hypertriglyceridaemia. The exact mechanism is unclear. However, one hypothesis is that decreased IL-6 levels lead to decreased expression of LDL receptor, very low-density lipoprotein (VLDL) receptor and scavenger receptor leading to decreased internalisation of lipids.9 These findings are all consistent with previous studies.7,8

Application. Early detection and recognition of hypertriglyceridaemia helps to avoid complications such as CRRT and ECMO circuit clotting; pancreatitis; dyslipidaemia; and increased risk of stroke and myocardial infarction. We propose daily weaning of sedation, optimising sedation practices through the use of minimal doses, and limiting the duration and amount of lipid content delivered to patients. Other alternatives to propofol, such as dexmedetomidine can be considered. A multicentre, double-blinded randomised controlled trial showed that the use of dexmedetomidine compared to propofol did not result in any difference in weaning off ventilator use or mortality at 90 days.10 In patients at particular risk for propofol-induced hypertriglyceridaemia, we recommend monitoring of TG levels to avoid hypertriglyceridaemia-associated complications.

Response to letters arising from publication of the Academy of Medicine, Singapore clinical guideline on the use of sedation by non-anaesthesiologists during gastrointestinal endoscopy...

Sedation in gastrointestinal endoscopy in Singapore

Response to letters arising from publication of the Academy of Medicine, Singapore clinical guideline on the use of sedation by non-anaesthesiologists during gastrointestinal endoscopy...

Sedation in gastrointestinal endoscopy in Singapore