There is a high burden of genetic disorders in patients admitted to the intensive care unit (ICU), ranging from 45–56%,1,2 and delayed definitive diagnoses with a long diagnostic odyssey often contribute to increased healthcare costs.3 The application of clinical exome sequencing in ICU has been gaining traction, where short turnaround time (usually within 2 weeks), coupled with relatively high diagnostic yield (30–40%), allows for significant changes in the medical management of patients with rare diseases,3,4 and provides answers to patients and their families.

As a follow-up to the Singapore Undiagnosed Disease research programme,5,6 we worked on translating the research into a rapid exome sequencing (RapidSeq) in April 2018. This exercise focused on known Mendelian genes, for critically ill patients admitted to the neonatal ICU (NICU) or children’s ICU (CICU) with suspected genetic disorders. Since then, we have extended this to include other families requiring urgent genetic testing outside the ICU setting.

This study is a prospective, observational study on the use of rapid genomics-based diagnostics for patients at KK Women’s and Children’s Hospital, Singapore where a genetic disease was suspected. The aim was to provide a genetic diagnosis within 10 days for these patients and/or families. In this study, we present our framework as well as initial results in implementing RapidSeq and highlight the lessons learnt and challenges faced, some of which are unique in the Singapore context.

Ethics approval was obtained from the SingHealth Central Institutional Review Board. Using existing hospital services, our team comprised a clinical research coordinator, laboratory scientists, bioinformaticians, genetic counsellors, a genetics specialty nurse, and a team of clinical geneticists to oversee the logistics and implementation. The overall process from enrolment to results analysis and disclosure is described in the online Supplementary Materials Fig. S1. 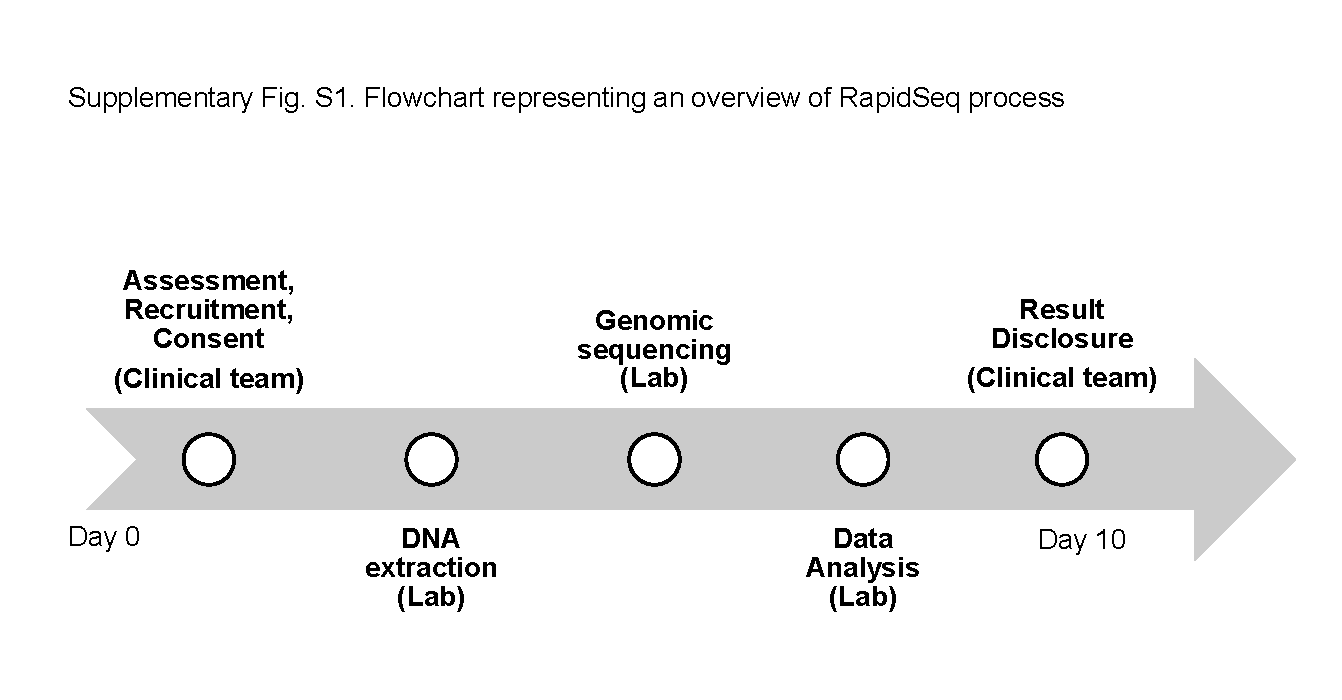 Patients were eligible if admitted to the NICU/CICU, or needed an urgent result, e.g. for prenatal care, and deemed suitable for testing by the clinical genetics team. Patients were ineligible if (1) a secure clinical diagnosis (such as Down syndrome) was made or previously known, (2) an underlying genetic aetiology was considered unlikely, or (3) parents were unavailable or declined to participate.

Clinical features were characterised by the attending geneticist, with provisional clinical diagnoses established. When indicated, chromosomal abnormalities were ruled out using karyotyping and/or chromosomal microarray analysis. Individuals who fulfilled the inclusion and exclusion criteria were then recruited, and pre-test counselling and consenting were performed by genetic counsellors.

Targeted sequencing of exonic regions of 4,813 genes associated with human diseases (i.e. clinical exome) was performed on extracted DNA, followed by bioinformatic analysis. Variants were classified according to the published guidelines7 with a clinical report being generated within a target turnaround time of 10 days.

From April 2018 to January 2019, 10 cases were enrolled into RapidSeq, with ages ranging from 3 days to 4.5 months old. Seven were from NICU, 2 were from CICU, and 1 was a stored fetal DNA sample where the mother was 12 weeks pregnant with a second pregnancy (online Supplementary Table S1).

In 5 of the 10 cases (50%), a genetic diagnosis was achieved (Table 1), although 1 case was only diagnosed on re-analysis of data 2 years later. For 3 of the 5 cases, the diagnosis led to changes being implemented in the patient’s management plan. The median turnaround time for results was 9.5 working days (range 5–19 days) (online Supplementary Table S2).

For cases 2, 6 and 10, the discovery of an underlying unifying diagnosis provided more clarity to the patient’s care team, allowing for targeted management and surveillance. For example, case 6 had a pathogenic mutation in SAMD9, consistent with an ultra-rare diagnosis of MIRAGE (Myelodysplasia, Infection, Restriction of growth, Adrenal hypoplasia, Genital phenotypes and Enteropathy) syndrome. Prior to diagnosis, the child was being managed by multiple specialists in an organ-centric manner. Identification of her diagnosis allowed for a more holistic and targeted management, and furthermore facilitated surveillance for other complications, including haematological malignancy and immunodeficiency.

Several challenges were faced during implementation. These included (1) facilitating care in a multidisciplinary team, which required effective coordination between the clinical and laboratory teams; (2) prolonged turnaround time due to (a) difficulties with pre-test counselling as parents were overwhelmed by the medical issues, and concerns about insurance discrimination; and (b) sample limitations such as blood transfusions, often necessitating alternative sample collection methods such as skin biopsy for skin fibroblast culture and DNA extraction (case 6 in online Supplementary Table S3); (3) cost of testing is prohibitive, with RapidSeq calculated to cost SGD6,000 at present; and (4) difficulty with coordination of bioinformatics processing due to limited internet access of the computers in the Singapore public healthcare sector. Genomics data have to be transferred via a physical hard disk, which requires coordination between the laboratory and the bioinformatics team.

There are limitations to RapidSeq testing, including only the clinical exome being targeted, the bioinformatics filtering process and variants of uncertain significance (case 7, online Supplementary Table S3). Lack of local reference genomic databases often results in patients of Asian ancestry being more likely to receive ambiguous genetic test results or variants of uncertain significance.8 We used trio-based sequencing as a way to improve our variant filtering process, balancing it against the increased cost associated with sequencing, as illustrated by the reduced number of candidate variants (online Supplementary Table S4). Correlation with clinical phenotype may also be difficult, especially in the neonatal setting, whereby clinical features may develop with age and be less recognisable when young,9 (case 8, online Supplementary Table S3). This emphasises the importance of re-analysing data from unsolved cases at a later time point, which could uncover the presence of variants in newly discovered genes or new phenotype-genotype associations.10

Our results emphasise the potential clinical utility of RapidSeq in critically ill patients. RapidSeq is an effective method for diagnosing patients with rare diseases, which aids in shortening the diagnostic odyssey, while allowing clinicians to appropriately tailor management for the underlying disorder. However, many challenges still remain, and continued efforts to optimise RapidSeq for future use are needed.